Better late than never, I guess...

Following my marathon in February, I'd had just about enough hard training on the roads for a while, so a return to the mountains seemed in order. Two weeks after the race I was feeling the urge to put down a hard effort and I'd heard that the popular Franconia Ridge loop over Mounts Lafayette and Lincoln was in prime condition. I was hoping to strike a balance between recovery and residual speed that would allow me to turn a fast time, despite my lack of recent mountain-specific training. I knew I had improved leg speed, but there hadn't been a lot of vertical over the last couple months. 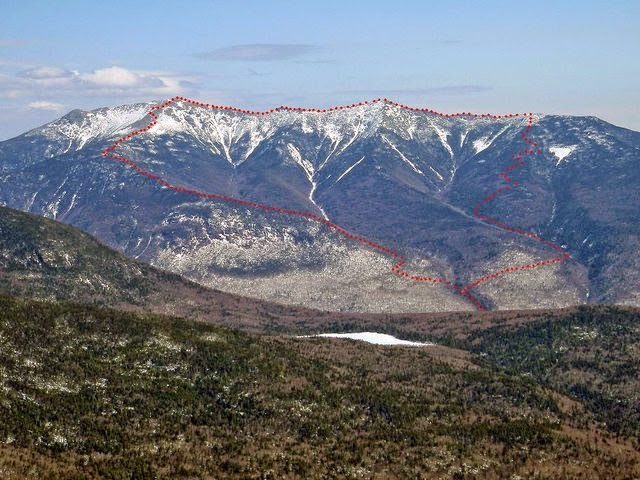 Wearing tights, studded Gore-Tex trail running shoes, and a small pack I was able to make rapid progress to treeline on the well-packed snow of the Falling Waters Trail. With a stop to throw on my wind shirt (rather like wrestling a Hefty cinch-sack in a stiff breeze) I made the summit of Lil' Haystack in 55:02 and fought a headwind across the ridge to the summit of Lafayette at 1:18:47. By this point I was 15 minutes behind FKT pace but still pleased with progress considering the winter conditions. Uphill on even the friendliest snow is always slower, but downhill is a whole different story...

The Old Bridle Path was a sidewalk-like snowshoe trench, with all the rocks, holes, and other summer obstacles smoothed over I was able to fairly plummet down from the summit, sometimes glissading, other times bounding with full road-running strides. Maybe that marathon training was an asset after all? I hit the parking lot in 1:48:21, having cut the gap on the FKT to only two and half minutes, making the descent from Lafayette in under thirty, and covering the last mile in 6:54.

A couple weeks later Kevin Tilton established a new Fastest Known Time  in 1:45:13. I've heard a few musings that going faster in winter maybe shouldn't "count" towards an FKT, because the experience is so much different. I strongly disagree. Kevin only shaved 37 seconds off Ben Nephew's time (set in June, 2012), which shows that the two seasons can both be very competitive for overall time, so why bother to sub-divide it? Additionally, I like that choosing the best trail conditions adds an extra dimension beyond outright fitness, especially when it's something as counter-intuitive as waiting for cherry conditions in March. In the summer it's up to the runner to select the best day possible; going for speed on a Pemi Loop in the rain would be foolish. Separate seasonal records really only seem justified to me when there's a truly substantial difference in overall time that can't be reasonably overcome; the Hut Traverse in summer versus winter, for example.