It's been too long since my last real adventure. The months after Hardrock were kind of aimless, I wasn't really sure what to do with myself. For some reason the motivation just wasn't there for anything really epic in between my new responsibilities as a family man. They say testosterone levels drop significantly in new fathers.Yet even as the athletic doldrums were filled with challenges and joys of an altogether different sort, one intriguing adventure still lingered in the back of my mind; the winter Hut Traverse.

If you're not familiar with it, the Hut Traverse is a 50 mile long link-up of mountain refuges in New Hampshire's White Mountains, entailing 17,000 feet of cumulative elevation gain over the most exposed, windswept terrain in the East. People have been traveling the route in a single day since the Great Depression and summer trips are fairly common. While there are a total of eight huts, most are seasonal and only three are open in the winter. As near as I can tell, a complete single day winter Hut Traverse has never been done before. Back in 2004 Tim Seaver published a very handy history of the route along with an account of his impressive partial winter traverse, which has provided me with quite a bit of inspiration over the years. 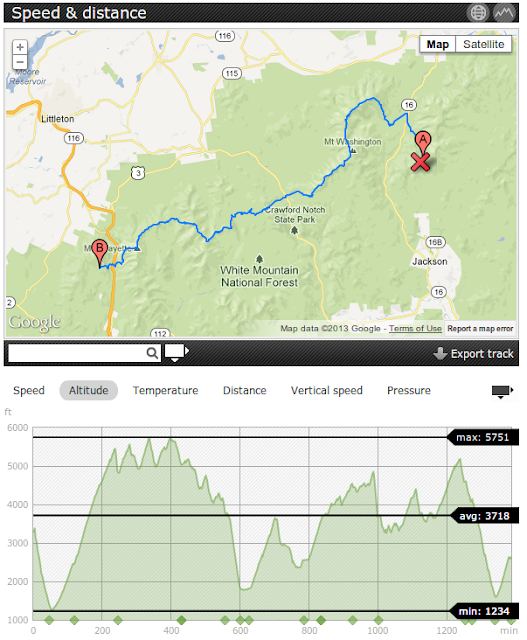 I spent a fair amount of time studying the route, practicing segments, testing gear, and just generally obsessing before I made the decision to go for it as soon as conditions were right. The goal would not merely be to make it from Carter Notch to Lonesome Lake in under 24 hours, but to do it safely, efficiently, and without drama. I didn't just want to get away with this monster of a hike by the skin of my teeth, but to do it in the good style that I was confident I could. This is supposed to be fun, after all!

So, with all that out of the way, I found myself standing in the dark with the door of Carter Notch Hut behind me and an ideal weather window in front of me on one of the last calendar winter weekends of the year.


I jogged the Nineteen Mile Brook and Great Gulf Trails, which were their usual well-packed selves, then took the more lightly used Osgood Trail over the summit of Mount Madison to Madison Hut. The Higher Summits forecast was calling for good visibility with moderate winds, and I was pleased but not surprised to find a starry sky and easy navigation above treeline in the dark.

The Gulfside Trail would take me most of the way to the next hut, Lakes of the Clouds, with a bypass around Mount Adams and some cross-country travel over snowfields to the summit of Mount Jefferson.  I shut off my headlamp around Thunderstorm Junction and the sun was above the horizon by the time I reach Edmands Col.

From Lakes, I bypassed the summit of Mount Monroe on the Crawford Path (unknowingly also bypassing a waiting Tim Seaver) to save a little time and elevation gain, then passed over the summits of Eisenhower and Pierce. The sun was out in full force, temperatures were quite mild, and the visibility was excellent; a wonderful day to be in the alpine zone. Off on the Eastern horizon I noticed a very clear band of glare and wondered if it was the morning sun reflecting off the Atlantic.

The Webster Cliff Trail was unbroken, but mostly downhill so the going was easy all the way to Mitzpah. Reconnecting with the Crawford Path I began to encounter throngs of day hikers, all headed upwards and just getting started with their day. With a Presidential Traverse under my belt, I was getting started with mine. At the road crossing in Crawford Notch, my parents had been nice enough to move my car for me, providing a convenient resupply point for food, water, and dry clothes. While I departed up the Avalon Trail, they moved my car again to Lafayette Place so that it would be waiting for me when I finished.

It's only a few miles to the crest of the Willey Range from Crawford but it seems to get steeper and longer every time I pass through. By now the day was very warm for March and the snow was turning to sticky mashed potatoes, weighing down my snowshoes. As I worked my way down A-Z Trail Zealand Hut, the clumps of snow in the tree branches overhead began to collapse to the ground around me at random intervals. With a few near misses it was only a matter of time before a basketball size blob of slush landed on the back of my neck.

With a refill of water and a brief chat with the caretaker at Zealand Hut, I headed out on the well packed Twinway to Mount Guyot, grateful for the chance to free my feet from heavy snowshoes and bareboot for a while.


After Guyot, the Twinway took a turn for the worse. Here, I put  my snowshoes back on and followed a broken out, meandering path through dense branches. The snowpack being in the neighborhood of 5-6 feet deep made it difficult for whoever broke section out to find the actual trail. Even when you were right on top of it you'd still be in the dense branches that aren't normally trimmed during the summer as they're so high off the ground. Noticing that my pace had begun to slow a bit, I began to get concerned about the remainder of the route. What if the trail was this hard to follow, but unbroken? I'd also have the added disadvantage of trying to navigate in the dark, which I was equipped to do but would likely have to sacrifice my 24 hour time goal. I began to nervously evaluate bailout options and knew that my decision points would come when I reached critical junctions in the Garfield Ridge Trail later.


I knew that at least one person was planning to pass through Garfield Ridge today as part of a Pemi Loop, and that kept me hopeful. Luckily for me, multiple parties had packed out this lightly used section all the way to Lafayette, taking the sting out the crux of the route. Still, it wasn't easy and I made slow progress over Mount Garfield and up the steeps to treeline on Lafayette. I didn't really notice it fully until I made Lafayette's open summit, but there was not a breath of wind. Totally calm. It was almost 10 o'clock at night when I sat down and drank in the absolute silence and solitude. With my headlamp off, I was surrounded by an unobscured sky peppered with stars and little twinkling lights far away in the valleys below. If I got nothing else out the traverse except for those few minutes, it still would have been worth it a hundred times over.

I planned to fairly plummet down Old Bridle Path in the dark, but by this time the temperatures had dropped and the packed trail got quite slick. Barebooting, I'd fall on my ass quite frequently, but with snowshoes my fatigued feet were in pain. Switching back and forth a few times, I finally decided that'd I'd just have to tolerate the snowshoes. Once down in Franconia Notch I crossed under the highway and entered the homestretch to the final hut at Lonesome Lake.


By the time I got there, everyone had long since retired for the night, but I did find a friendly note and care package from the caretaker. After 23 hours and 7 minutes, that PBR sure did hit the spot. 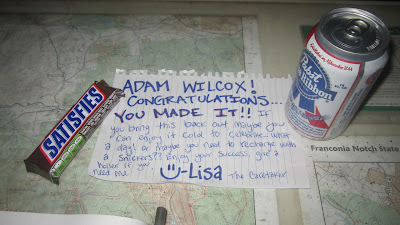