The Massanutten 100 in Fort Valley, Virginia was supposed to be my Spring 2014 focus race. I've run it twice before in 2010 and 2011 with finishing times of 28:50 and 23:17, respectively, and I was looking forward coming back to what was a personal breakout for me three years ago. 2011 was my first time in the top-ten of a major ultra and I've not finished outside the top-ten in the eight 100-milers I've done since then. There was alot of potential unlocked at Massanutten in 2011 and my hope was that I could use some of the things I learned from marathon training to dig even deeper.

As such, I began to ramp up my mileage this spring and included more quality workouts than ever before, culminating in a peak five week period that would include four 50K races before a short taper. There are plenty of April and May 50Ks to choose from in New England and I pretty much decided to run them all. I'd used them to boost my weekly mileage, get some quality long runs in, keep my enthusiasm high, and have some fun. 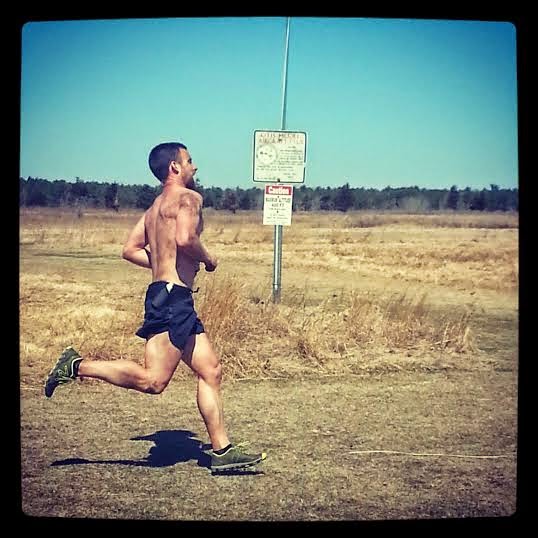 The Cape Cod Trail Race came first on April 6, with five 10K loops on conservation land outside Otis Air Force Base. It was a good opportunity to get out on some dry trails while everything in the woods back home in New Hampshire was still locked under snow and ice. The course was a little slower than I expected with some notable elevation gain, tight singletrack, and rock gardens to run through, but that's a good thing. I barely squeaked out a sub-four hour finish in 3:59:21 for second place to Eric Ahern. With lap times of 45:00, 45:42, 47:00, 49:55, and 51:43, I could have run a more evenly paced race but I was never really in contention for the win and I just chalked it up to a learning experience.

On April 19 was the Traprock 50K in Bloomfield, Connecticut. This course has a reputation for being very technical, and it is in places, but there are quite a few easy miles were one can stretch their legs and open up their stride a bit. I find that people tend remember the hardest parts of any given course and, combined with a tendency towards exaggeration across the board in ultrarunning, this makes most races sound more fearsome than they really are. In any case, Traprock has many similarities to Massanutten and I enjoy it enough to return for a third go. My last time here in 2013 was something of a disaster as I'd picked up a stomach virus from my daughter that decided to rear it's ugly head on the third and final loop. It put me on my knees with vomiting and other unmentionable digestive indignities and put her in the emergency room. 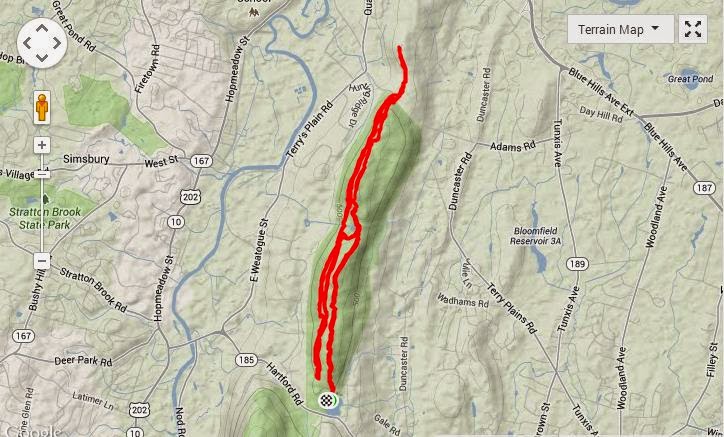 I was in the lead for a while on the first lap (1:24:46) with some enjoyable conversation before deliberately throttling back and falling to fourth place on the second lap (1:31:20) in an effort to be more conservative. On the third and final lap (1:37:31) I moved up to second and was hunting the leader, my good friend Ryan Welts. I drew within a few minutes of him, close enough to shout out a warning that he'd better move his ass when we passed by on an out-and-back section. He must've listened because I was unable to catch up and finished five minutes back in 4:33:42.

Next was the TARC Spring Classic on April 26 in Weston, Massachusetts, which I'd be running for the fourth year in a row. The race is well organized with a good community of regulars. It's also a fast course as far as legit trails go with negligible elevation gain and easy footing for 90% of the 10K loop. Every time I come here I've set a new 50K personal best and I was hungry to improve further. This year the weather could only be described as atrocious; the temperature hovered around 40 degrees all day with a heavy rain. My long sleeve shirt was quickly saturated and clung to my body. Making a fist would wring out my gloves and make water trickle onto the ground. I was able to maintain a hard pace throughout, largely because I needed to fend off hypothermia. 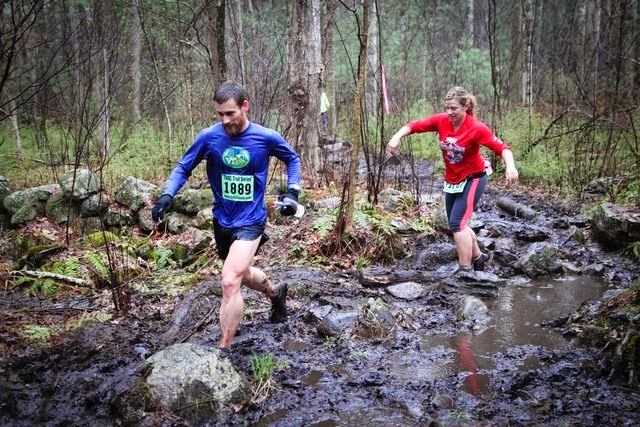 I shared the first lap with Sam Jurek who was less than a week separated from a fast time at the Boston Marathon. He must have been recovering well because he steadily pulled away throughout the race to finish ten minutes ahead of me. I didn't worry about him too much and instead focused on staying as even as possible, which paid off. My lap times were 43:14, 44:04, 44:57, 47:23, and 46:50 - far more consistent than ever before and earning me a 3:46:21 finishing time. While this is only a minute faster than last year, the pace was more even and I felt better at the end; more like an intense training run than an all-out race effort. Oh yeah, and good for second place (again!)

Lastly came the race that would prove to be the hardest of them all, the Big A 50K on May 3rd at Mount Agamenticus in Kittery, Maine. This one was the most low-key, having an old-school fatass feel; just a guy with a watch and a clipboard next to a table of pot-luck junk food at the start/finish line. Agamenticus isn't very tall but when you run up and down the mountain several times on each of the three laps, the gain starts to add up. On top of that it was the most consistently technical course of the spring with legit boulder-hopping and treacherously slick wet slabs near the summit. The views were unmatched as well; visibility stretched from Cape Ann jutting out into the Atlantic on one horizon to snow-capped Mount Washington on the other. A very cool place to have a race indeed. I suffered a minor setback on the first loop when I took a fall and lost my gel flask out of my shorts' pocket, but I was able to improvise with Coke and aid station food until I got my gel back in time for the final lap. My final time was 4:59:28 which I'm told is a course record or something. Of all the races this spring, Big A was my favorite. 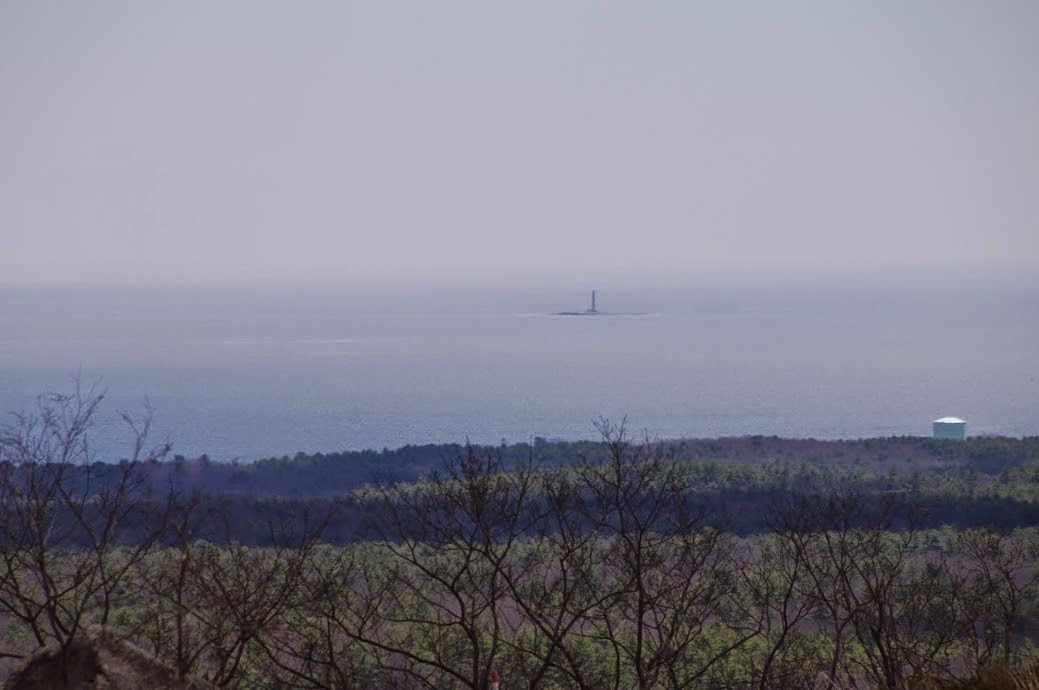 So, with all that out of the way, I was feeling pretty confident in my preparation for Massanutten. Possibly in the best shape of my life, which is always a good feeling. And then disaster struck. On a simple mellow run in Bear Brook State Park, my home training area, I turned my ankle on a rock. It wasn't a particularly demanding section of trail, but there was a rock lurking under some dead leaves just the same. I turn my ankles pretty frequently, usually with so little consequence that the term "ankle yoga" gets thrown around among my friends, but this time was different. It hurt badly and before I'd even come to a stop I thought to myself "there goes Massanutten". It took a few minutes for the pain to subside enough for me to think straight but I was able to walk, though not run. I evaluated my options and chose to slowly limp a couple miles to the nearest road where I was able to flag down a ride home.

There was only a week left before the race and while a few days of rest did improve things, I knew that even if I could run at a tolerable pain level, Massanutten's distance, footing, and night running just wasn't a smart move. I emailed the race director and my pacer a few days ahead of time and withdrew my entry. And just like that, after all the preparation I'd put in, my spring and summer changed.

To be continued.
Posted by Adam Wilcox at 8:05 AM