For me, running the Pemi Loop is an exercise in excessive optimism. I suppose it needs to be. I'm much stronger than last year, surely I can shave off twenty minutes. This thought, a good trail condition report, an excellent weather forecast, and the realization that I hadn't made a visit to the Pemi Loop in over two years led me to make my return. For perhaps the thirteenth time I ran the 50k-ish, 9000 foot course on June 8th with the aim of going as fast as possible and maybe regaining the FKT.

On my last attempt in 2012 I had the benefit of frenzied mountain training for Hardrock, but only managed to shave a token two minutes off my 2011 time. This go 'round, I reasoned I had the benefit of my marathon training for greater leg speed. Plus, I would go lighter than ever before. I'd wear 8-ounce New Balance trail shoes with sticky-rubber outsoles, rather than 12-ounce Brooks Cascadia cinder blocks - feared for their poor grip on wet rock. I finally found a pair of running shorts with good pockets so I could cram in 10 ounces of gel, a small headlamp, and an ultralight windshirt rather than actually carrying a pack. This would force me to use hand bottles for water, with a reduced overall capacity, but would make it easy to refill out of wild water sources on the move. After some research, I've become more comfortable with selectively employing this practice (lots of good information here at Far North Endurance). I'll also say that I wouldn't take such a minimalist approach on a day with any credible threat of poor weather but I then wouldn't be attempting an FKT on those days anyway.


On Pemi-day conditions didn't turn out to be ideal, much more humid and warm than I would have liked, and I struggled more than usual in the final miles. Right now, over a week later, I can recall the damp composting smell of late spring on the Garfield Ridge Trail. It's a little strange to me, but during a hard effort like this I'm left with short, vivid snapshots in my memory from a few particular places and they're not always visual. This one is kind of a distinct Pemi-Loop smell; rotting leaves and moss mixed with B.O. and a whiff of ammonia. Maybe the sound of trickling water and my own labored breathing on the background. That's what I have associated with the the route.

To make a long report short, I cut almost five minutes off my personal best time but came up eleven minutes short of the FKT in 6:38:21. What's spooky to me is how utterly consistent my split times have been, something that can bee seen with a little bit of analysis. 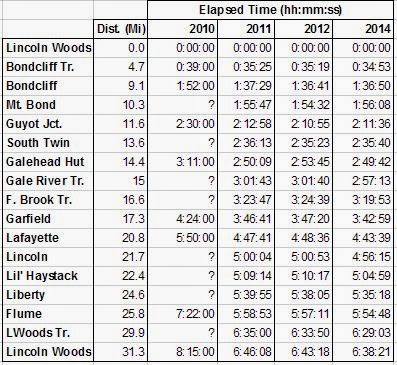 I was nearly dead-nuts on my last two attempts until Galehead Hut, where I pulled ahead of my old times a little. Some time was lost dilly-dallying on Franconia Ridge but I gained it back on the descent of the Osseo Trail from Flume (remember that leg speed thing?). If this were a three-way race I'd have been almost always within sight of my 2011 and 2012 selves for much of the route. This despite several factors in my favor (lighter wight, greater experience) and several factors against me (heat, the generally deteriorating condition of the Bondcliff Trail). Another notable point is that my time to the the junction between the Garfield Ridge and Franconia Brook Trails is a very good indicator of final finishing time, halfway by the clock and accurate to within a five minute margin. 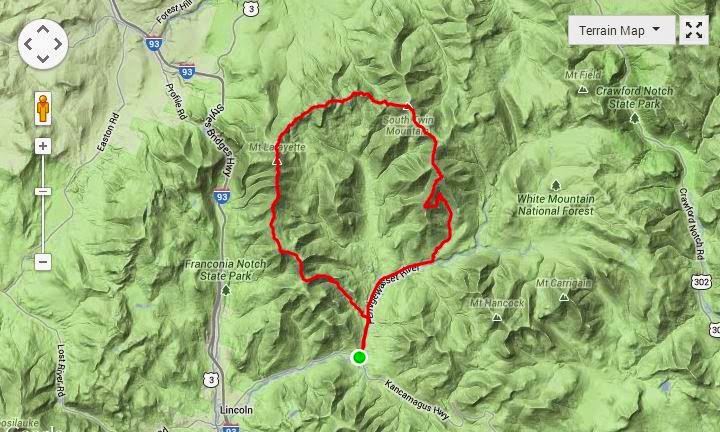 As for the whole water capacity thing, I could have comfortably made it to Garfield Spring with only a single hand bottle. I filled up once on the way up the Bondcliff Trail, then again at the spring where I chugged a bottle and was able to ration my 40 ounce capacity for the rest of the day. I did finally run dry on Mount Flume but at that point I was only 45 minutes from the parking lot and could tolerate a little bit of cotton mouth.

And now I'm left searching for those remaining 11 minutes. This is the best kind of challenge, difficult but feasible. I feel more or less tapped out as far as flat ground and descending speeds go, so I'll need to get stronger on the climbs and improve my stamina. This will mean lots of easy base-building aerobic activity as well as a focus on hill repeats and the like. That combined with a cool, dry day (perhaps this September) and maybe I can get back in the record books, however fleetingly.

What is somewhat gratifying to me is the realization of just how much I've improved since my first Pemi Loop in 2005. If I were to race my 2005 self, I'd be rolling out of my own bed right around the time my slower self left the Lincoln Woods parking lot in the dark. I'd have enough time to make coffee and eat breakfast at home, make the ninety minute drive up North, then pass my old self somewhere on the Twinway. From there, I'd steadily pull away and be home with enough daylight to drink a beer and mow the dandelions on my horribly neglected lawn, all well before dusk, while 2005-Adam would stagger the final few miles down the Wilderness Trail to the car and probably stop at McDonald's on the way home in pathetic desperation. Progress is beautiful thing, regardless of how it relates to the cutting edge of your sport.