The Pemi Loop is a 31 mile enchainment of hiking trails that circumnavigates the Pemigewasset Wilderness in New Hampshire's White Mountains. Some consider it a three to four day backpack, while others complete it in substantially less time. With 9,000 feet of elevation gain and heinous footing, the Loop is a popular test piece for New England mountain runners and hikers.

I've completed the Loop five times over the last five years, with times ranging from 14 hours to 8 hours. Summer, winter, fast and slow - I like it all. Lately, my running abilities seem to have exploded; nearly every race I enter is better than the last one. Nearly every "reach goal" I set for myself is achieved. With that in mind, I decided to run Pemi Loop number six as an all out-out race effort - leave nothing on the table. I figured that this would get me into the low 7 hour range and breaking the 6:47 "fastest known time" was a fantasy. I respect those who've come before me, bit it seemed a bit too audacious to announce any intentions of competing with their times, so I largely kept any record setting ambitions to myself.

At the Lincoln Woods footbridge I stood around for a little bit, I was nervous and had to take a few minutes to gather myself. When my watch said 7:50 I started my GPS and my wrist watch, stepped on to the bridge and started running. The Wilderness Trail is flat and easy and I was able to maintain a 7-8 minute mile pace all the way to the Bondcliff Trail, which I reached in 35:25. From here, the trail mostly takes a gradual uphill with a few stream crossings before steepening higher up. One thing I knew I could do better than on previous runs here was to jog all the shallow uphills. Often, rocky technical footing makes these sections mentally difficult to run, despite their grade. But if I focus on jogging instead of hiking them, there's much time to be saved.

I broke out above treeline to clear skies and a stiff breeze, reaching the Bondcliff summit at 1:37:29. My main strength in mountain running is technical downhills and it felt good to stretch my legs a bit on a gorgeous section of trail before resuming the uphill grind to Mount Bond. Over the top and down the other side brought me to the Twinway junction with 2:12:58 on the clock. From here, much of the trail to South Twin Mountain is runnable and I made sure to keep my effort level up. I reached South Twin's summit at 2:36:13 and then bombed the steep and rough descent to Galehead Hut, arriving at 2:50:09.

I refilled my two liter water bladder in the hut and unpacked a fresh gel flask with only a couple minutes wasted. I knew that I was in a very good position for a strong total time but the hardest section, Garfield Ridge Trail, was ahead. The initial downhills went very fast and I was pleased to find relatively dry trail conditions. On the uphills though, my hamstrings began to twitch and cramp. It was pretty humid and I was sweating alot, with salt starting to feel gritty on my face. I quickly took some more electrolyte pills and was able to fend off any severe cramping. Garfield's summit arrived at 3:46:41.

My time over to Lafayette was a bit slow as I struggled up the steep slabs that lead to the summit, arriving at 4:47:41. Fortunately, I had all the major climbs behind me and I got some physical and mental rest running above treeline on the Franconia Ridge Trail. No matter how many times I go through this place, I still get a boost from the commanding views. I reached Little Haystack in 5:09:11 and dropped back into the trees. Here, my pack began to feel awfully light as I had very little water left.

Late in an intense running effort, my mind tends to get fuzzy and I have a hard time doing math in my head; I became convinced that it was going to take me several hours under the best conditions to get to the end. I felt like I would be lucky to finish in under 8 hours which, combined with some urinary troubles, severely disheartened me. I let my mental discipline slip and began walking on flat sections and shallow uphills that I could have run. Liberty Springs Junction came at 5:39:20 and on the way down Mount Liberty my water ran dry.

I finally reached the top of Mount Flume at 5:58:53. My time was looking a bit better but I thought sub-7 hours was out of reach even though I only had downhill left. My mouth was dry and parched but I bombed down the Osseo Trail knowing that the faster I went, the sooner I could get water. The descent down this trail is the main reason I prefer to do the Pemi Loop counter clockwise, once it joins an old logging road the grade and footing are perfect. It feels almost effortless to go fast here, I just move my legs as fast as I can and let gravity do all the work. Lucky for me, my wife was on her way down from Mounts Flume and Liberty and I took some unplanned support from her in the form of a few gulps of her water.

Much sooner than I expected, the trail began to flatten out. The next thing I knew, I was back to the Wilderness Trail and my watch said about 6:35. Wait... what!? I was under the impression that the Fastest Known Time for this loop was set by Jan Wellford at 6:43. Though that seemed out of reach, I knew I could come close with only a mile of flat trail remaining. I didn't try any heroic efforts on the homestretch and I crossed the footbridge, stopping both watches when my feet hit dirt on the far side. My GPS said 6:46:08 and my watch said 6:46:10. Since I accidentally hit the stop/start button on the GPS at one point, I decided the slightly slower time was most accurate. 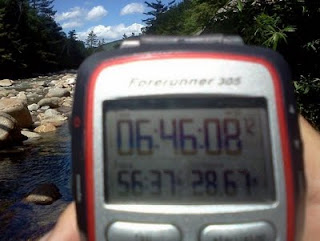 It was only on the car ride home that I looked up the previous record time. Last year Jan Wellford ran the opposite direction and got a 6:47:04. I cut less than a minute off that time. Also worth noting is that this is less than half the time my first Pemi-Loop took me back in 2005.
Posted by Adam Wilcox at 5:39 AM