Gain is the name of the game. With the Hardrock 100 only four short weeks away, my training is going well but needs to be capped off with a couple long days in the mountains with plenty of power hiking. Running around town on lunch break or spending all day zooming around Bear Brook State Park is all well and good, but there's no substitute for specific training. While I could just run repeats up and down Mount Madison, racking up elevation gain 4,000 feet at a time, actually traveling somewhere is much more fulfilling (and the reason I like to do this stuff in the first place). The Hut Traverse, running East-West across the White Mountains for about 50 miles and 17,000 feet of gain, fit the bill perfectly. You can read more about the route here, here and here. While the variation I chose is considered to be the slightly easier "minimal" route, I find that it's the much more aesthetic of the two and I don't feel the need to include Pinkham Notch Visitor Center as a hut. Seriously, why would I spend less time above treeline in exchange for Pinkham, which has powerlines and a parking lot? Sounds like a raw deal to me.

So with the route chosen, I decided to make things a little more interesting. On my previous traverse back in 2010, I started at 2 am (in the dark) and took almost 17 hours to finish. Around these parts in June, the day is about 15 hours long. Why not start at Carter Notch Hut at dawn and race the sun West to Lonesome Lake Hut, trying to finish before sundown? This would allow me to start later (and get more sleep) as well do all of my running on the rocky trails in the daylight. Perfect! With a favorable forecast and a suitably novel plan, my weekend was set.

After a restful night under the stars, I set off on the Nineteen Mile Brook Trail to Carter Notch at 2:35 am, being careful to hike at an easy pace and save energy. It's always kind of cool being in the woods at this time of day; things are very quiet and I have the trail to myself. The sky begins to lighten and I'm left wondering why the birds seem to sing the most at dawn; I don't really notice them as much during the day or in the evening. After reaching the hut I lingered around for a little while, listening to the mice scurry about while a couple Appalachian Trail thru-hikers snored on the floor. I had intended to start at 5, but by 4:30 it was light enough to see well, so I signed the guest book and quietly slipped out the door. 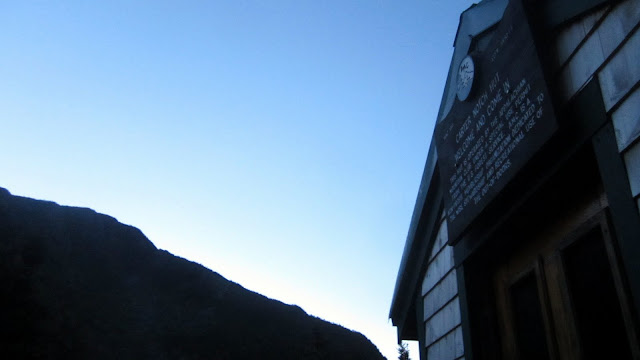 The run back down to Route 16 passed by in a brisk 40 minutes and I was soon jogging up the Great Gulf Trail. This time around I decided to take the Madison Gulf Trail, which is very steep and winds its way up a drainage filled with boulders as big as trucks, then over a few third-class scrambles to emerge above treeline in the col between Mounts Madison and Adams. I took a second to look back toward Carter Notch, where I started, just right of the sign: 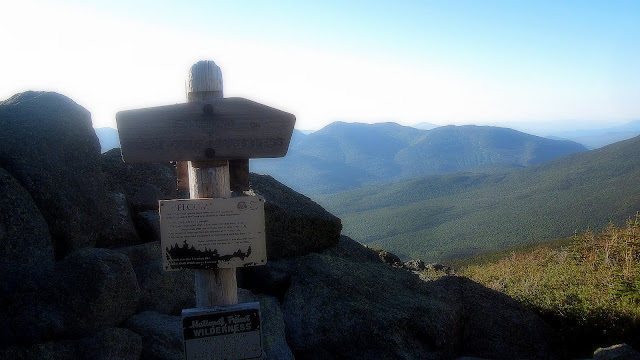 I hit Madison Hut at 2:23:36 (1:43:44 from Route 16), signed in and topped off my water. Whatever was being served for breakfast smelled really good, but I needed to boogie onward. 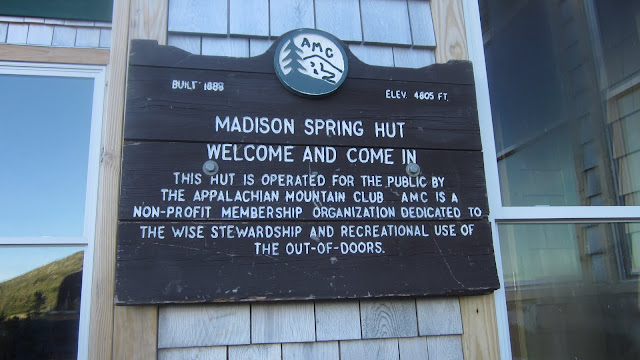 The next stretch on the Northern Presidentials is my favorite part, so I stopped now and again for a few pictures. The view to the north from Thunderstorm Junction: 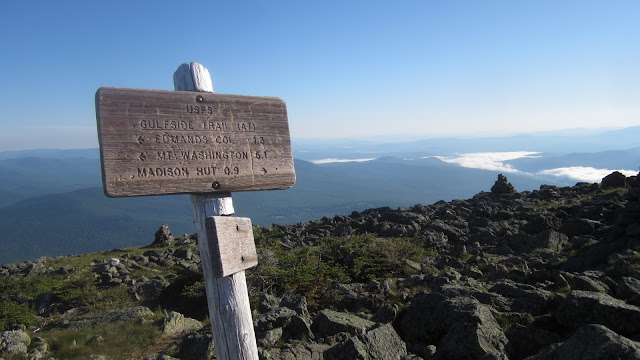 The Gulfside Trail stretches ahead from cairn to cairn to Mount Washington - my route will then follow the descending ridgeline to the right: 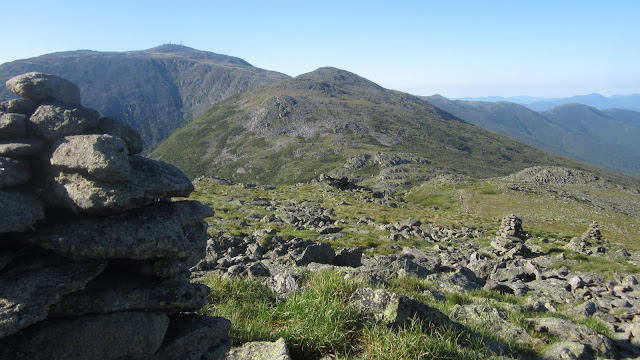 The Cog Railway leading away towards Washington's summit: 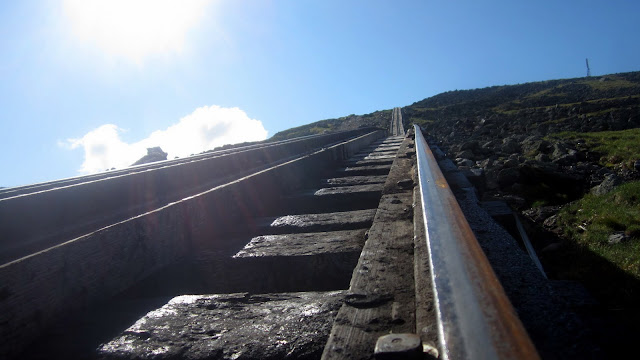 Adams and Madison framed by the trestle - what a gorgeous day to be out! 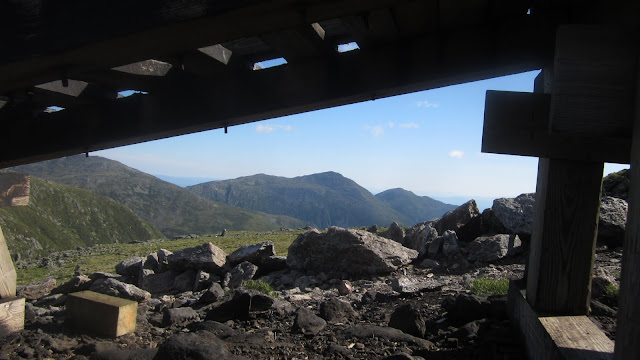 My next stop, Lakes of the Clouds Hut (reached at 4:11:42 elapsed, 1:48:06 from Madison), seen below Mount Monroe in the left side of the picture. My final destination for the day is beyond the high point (Mount Lafayette) on the horizon, with many peaks, ridges, and valleys to cross in between: 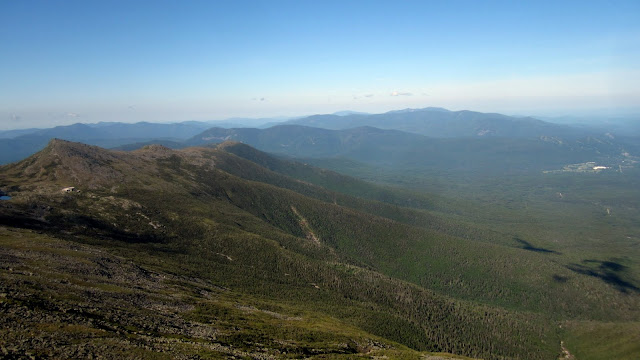 The Westside Trail is always a pleasure and makes for some mighty fine runnin'. 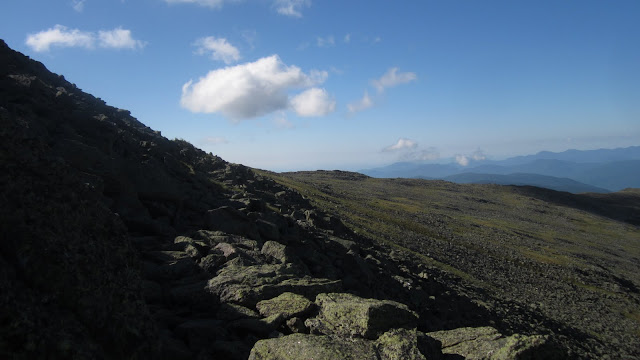 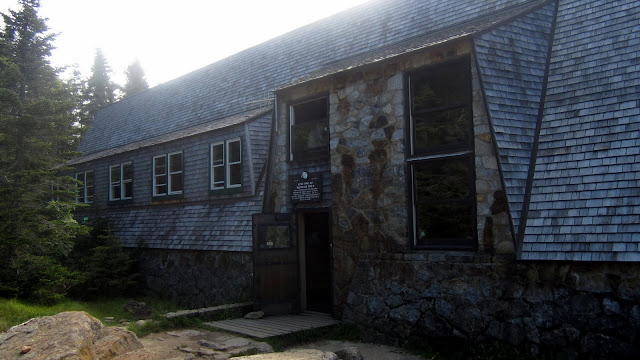 Dropping down into Crawford Notch, I could see that I was on a pretty good pace with 5:52:43 elapsed and 34:06 from Mitzpah. While this is roughly the halfway point by distance, it certainly isn't by time. There are several big climbs and many miles of tough trail left go and I think the second half of the Hut Traverse is the harder section.

My roadside stash of goodies  - a smorgasbord of tooth decay! 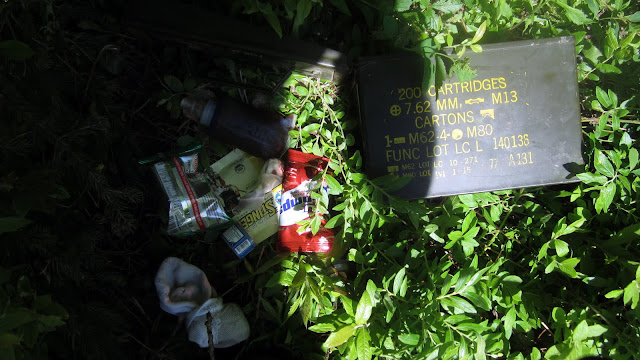 Just like last time, the steep climb over the Willey Range was a hands-on-knees struggle in the heat of the day. I'd developed a bit of a headache and a couple times was reduced to leaning against a tree while my head spun. Finally cresting over the top of the ridge by Mount Tom, I could switch back to a run down the A-Z Trail and over its rotting bog bridges. It looks like they're planning to replace these soon, as a pile of chopper-delivered lumber was waiting off to the side. 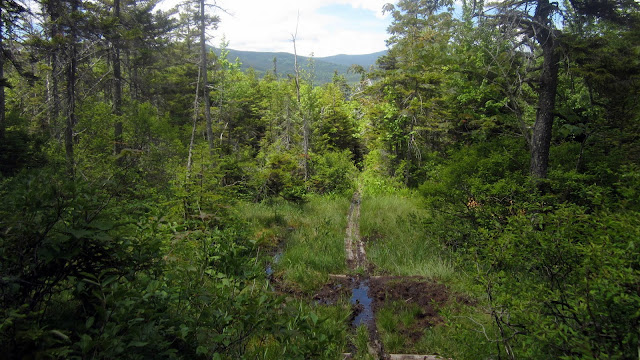 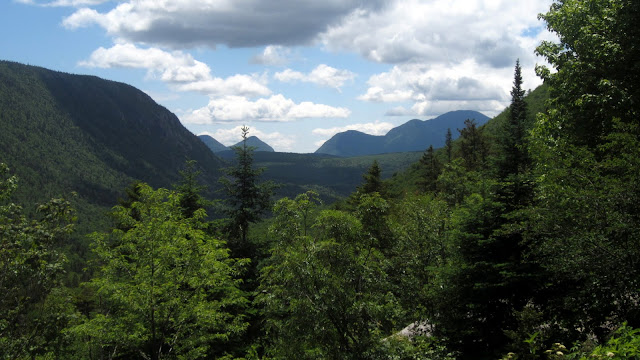 The Twinway is another tough section for me and it took 1:26:05 to reach the trail junction on Mount Guyot, in 8:55:45 total time. I stopped for a quick picture of Galehead Hut from South Twin Mountain's summit. I'll need to navigate the tortured ridgeline over Mounts Garfiled (center-right) and Lafayette (center-left): 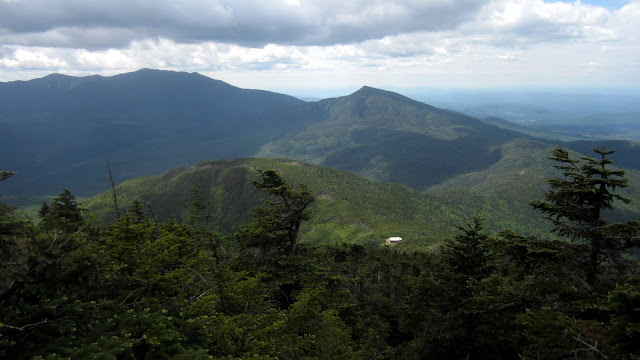 I finally arrived at Galehead in 9:51:44 and 55:59 from Guyot, quite a bit slower than when I run this section on a Pemi Loop. It was mid afternoon by now, hot and humid, my still head hurt, and I was losing focus enough that fooling around with the camera felt like a good idea: 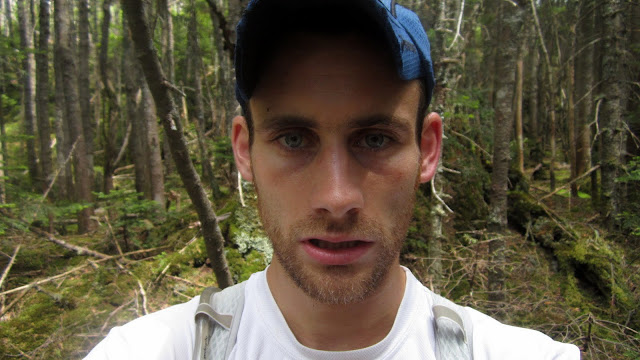 The view from on top of Mount Garfield, sizing up the route to Lafayette across Garfield Ridge, the trail I love to hate: 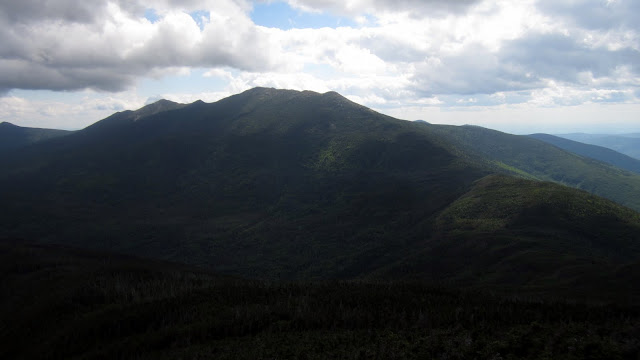 Only a steady stream of sugar, salt, and water kept me moving up the last big climb to the crowded summit of Lafayette. Luckily, there was a cool breeze and I started to feel a bit better. Looking back to the East, I'd come so far I couldn't see where I started. Mount Washington was now in the clouds on the horizon: 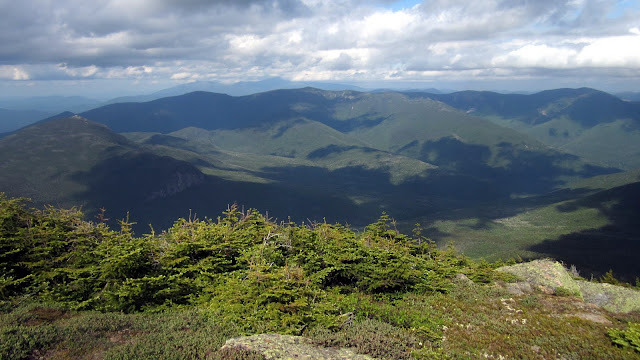 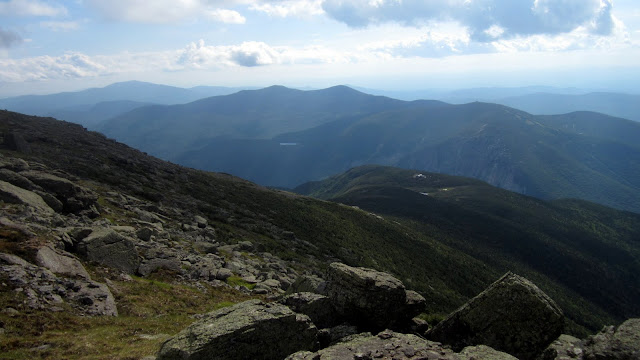 I plummeted down the Old Bridle Path, navigating around scrambly ledges and the Levis-and-Reebok-crowd alike, forgetting to hit the split button on my watch as I crossed under the highway in Franconia Notch. By this time it was quite obvious that I'd have no trouble getting to the last hut before sundown, but if I kept pushing I should be able to come in under 14 hours. That seemed like a good goal to focus on, so I alternated between running and hiking on the last section of trail, with a final sprint to reach Lonesome Lake Hut in 1:11:49 from Greenleaf. My final time was 13:53:16, a new personal best by almost 3 hours!

The Lonesome Lake Hut croo was busy preparing dinner and generously offered me a hot heaping helping of turkey and vegetables with a half loaf of bread that I ate so fast I got an upset stomach from not chewing enough. I ended up getting so wrapped up in eating and thinking back on the day that I forgot to take a finishing picture, or any pictures since Lafayette for that matter. After walking back down to the highway, my wife picked me up and we were able to begin the long, tired process of retrieving my car and ammo box before the drive home.

So, I ended up getting exactly what I wanted out of the day. It's one hell of a feeling standing on an open summit and knowing that the horizon is within reach, and a fix I keep coming back for. Additionally, the run was a fun way to engage with the mountains that are a huge part of my life - as well as great preparation and a confidence booster for Hardrock. I'm not too sore and should be able to continue training hard for another week before tapering for the race.
Posted by Adam Wilcox at 12:17 PM