Monday: 6.2 miles, 331', 8:30 pace. Recovery run with some scrambling at Cigarette Butte. I'm less sore than expected after the marathon and ended up going farther than originally planned. The first few hundred yards made me think I'd call it a day after a mile or two, but the legs loosened up nicely.

AM: 6.7 miles, 236', 8:20 pace. Explored some roads and trails near home before sunrise. Discovered a couple nice new prospects close to home, but there's still a lot of ice in the woods so I'll have to come back in a few weeks. My right foot hurts a little bit. 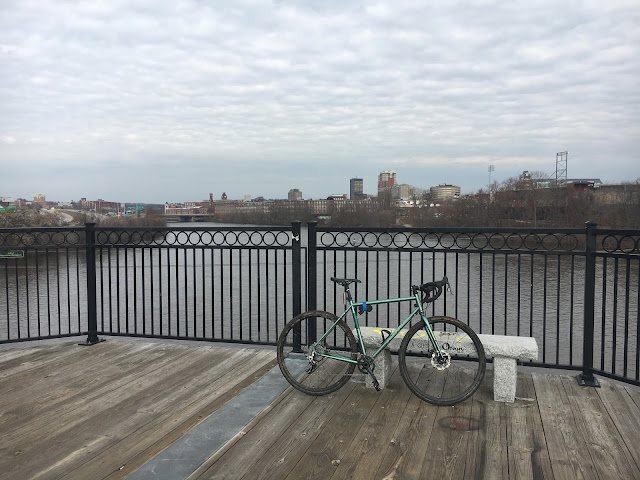 Friday: Zero. Stuffed my face at the local greek gyro place instead.

Sunday: 11.3 miles, 453', 8:26 pace. Icy fire roads around Tower Hill Pond. 10 degrees and windy, but I was happy to let the dog burn off some energy as well as feel some dirt under my feet. Carbide studded Inov8 Orocs were just the ticket for mixed ground conditions.

I'm feeling 99% recovered from the marathon last week, further confirming that I ran a smart race and pushed just hard enough to get the result I wanted without needing to take more than a week to get back into training. I'm looking forward to getting back to more trail and mountain oriented stuff, especially as the snow melts and the ground dries out in the next few weeks. Up next is the Breakneck Point Trail Marathon in New York on April 15th, which gives me six weeks to get some good hill work in.

Also, this week I realized that I'm lacking a qualifying race for the 2018 Western States lottery and most of the events on the list in the US are already full or conflict too with other things on my schedule. My options boil down to (A) Pine to Palm 100 in Oregon in September, (B) Pinhoti 100 (for a third time) in Alabama in November, or (C) just forgetting about Western States. While I would like to run it again, I'm not sure it's worth the cost and schedule disruption just to maintain a very small chance in the lottery. I'll need to think about it some more.
Posted by Adam Wilcox at 12:35 PM