I imagine my progression to running a half-marathon was an uncommon one. Despite having completed three full marathons, including a Boston qualifier, and more ultras than I want to count, I just never really got around to doing some of the shorter distance stuff. Some of this springs from the fact that I started running with the aim of being a better long distance hiker and some of it stems from not wanting to spend more time driving to a race than actually running it. But lately I've begun to see value in adding a little higher intensity activity to my training, especially considering that I'd like to set a new personal best at the Boston Marathon in a couple months. So when my wife wanted to run the Hyannis Half Marathon on Cape Cod I decided to sign up as well. I could be there for her finish and it would be a novel way to mix the weekend up - seeing how fast I can cover 13.1 miles. 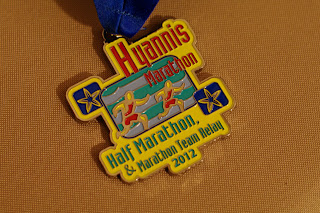 Despite dozens of race starts over the last few years I still get tense and anxious at the start of every one. Standing in the packed corral I looked down at my heart rate monitor, something I've just started to toy with, and was surprised to see a reading of 110 bpm and I hadn't even started moving yet! Anyway, the actual start felt slow as I wove through the crowd but once the field began to thin out and and everyone found their pace I was able to get up to a comfortable speed. It felt strenuous but sustainable until we passed the one mile mark in 5:58.

Crap! 5:58? That's faster than I've run a single mile before. I tried to get my adrenaline under control and slowed down to a safe and sane 6:20 per mile. Still, I can count on one hand the number of times I've hit this pace. It felt OK but I was in totally unknown territory. Ultimately I decided to just roll with it - go big or go home - and slipped into a pack of about 6 other guys doing a similar speed.

Being held on Cape Cod, which is more less a big sandbar in the ocean, the course is largely flat but even the tiniest uphill grades felt like mountains at this effort level. We hit a few open areas where a hard wind came in off the Atlantic and I began to struggle to keep up. My pace started creeping closer to 6:30. Doubts crept into my mind and slowing down to a walk was so very tempting, but I reminded myself that this was what I'd come here for.

With only 3 miles to go our little group began to fall apart, some powering on ahead and others falling back. I held strong, focusing on keeping my form and speeding up a little, but my sides were beginning to hurt and I was making funny gurgling noises when I exhaled. The little bit of Gatorade I was able swallow a few miles back - most of of the cup had ended up on my face - started trying to come back up in burps. After what felt like an eternity I rounded the last corner and kicked with everything left to cross the finish line.

Final time was 1:22:58 for an average pace of 6:20 per mile - not bad considering my goal was 1:25. I really gave it 100% this time and can't really come up with anything I could have done to go substantially faster at my current fitness level. This might even qualify as a personal breakthrough.

Hyannis Half Marathon by wilcox.adam@gmail.com at Garmin Connect - Details

After drinking some water and staggering around for a couple minutes I headed back out on the course in reverse until I met up with my wife who I escorted to her own finish. It was a nice little bonus to be able to share something like that and I'm proud of her.

It's funny that when a marathon or half marathon comes up in conversation, people almost always say some thing like "that should be a piece of cake for you!" I find myself responding with the same phrase much of the time:


If it's easy, you're not trying hard enough.

I think that sums up my experience last Sunday pretty well.
Posted by Adam Wilcox at 8:22 AM