How many times can you do the Pemi Loop before it gets old? I'm not really sure, but after 8 rounds (in 10 attempts) I'm still having fun. One way to keep things fresh and interesting, as if any trip over Mt. Bond could be dull, has been to make the trip in winter. It's kind of fun to experience all the same trails and peaks at half speed on snowshoes, and something that's only been done in a day a handful of times that I know of.

So with nothing better to do on a February Saturday, I joined my friends Farmer and DangerGirl for yet another lap of the Pemigewasset Wilderness. We departed Lincoln Woods some time around 7:00 am and headed out on the Wilderness Trail. 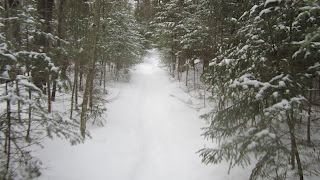 A couple hours later we popped out above treeline in somewhat breezy and foggy conditions at the infamous  "Hillary Step" just below the summit of Bondcliff. This fearsome 15 foot rock scramble has inspired more than it's fair share of discussion on hiking message boards in the past. Is it class two? Class three? CLASS FIVE ROCK CLIMBING?!?! All I know is that my dog bounds up and down it without assistance. 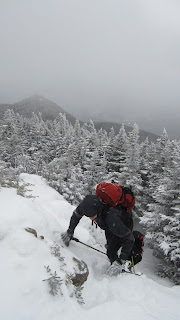 It's a low snow year, but we did get to jog through some soft powder down to the col on the Way to Mt. Bond. In order to better fit in when we go to Colorado in July, Farmer, DangerGirl and I decided to practice some bro-lingo. Yeah, we're droppin' some freshies down a rad chute into some sweet pow, brah. Shred the gnar! I instantly felt like a total tool and swore never to talk like that again. 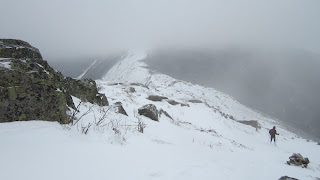 The view back to Bondcliff. 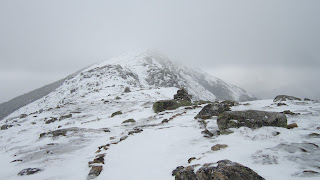 We decided to split up for a bit, so while my two companions made the side trip to West Bond I continued down the snowy Twinway on my own. 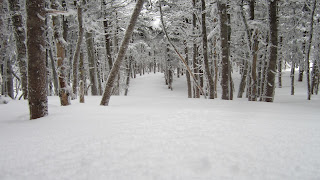 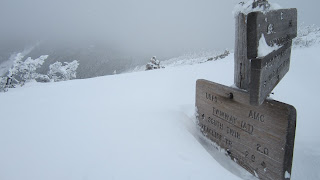 After crossing over the summit of South Twin, I made an easy 2.7 mile side trip to North Twin. Apparently someone got a little carried away while painting blazes this summer. 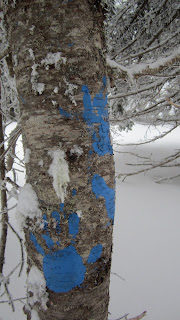 Back on the Twinway I got a good view of Mount Garfield a few miles away; my next stop, after another side trip to Mount Galehead. 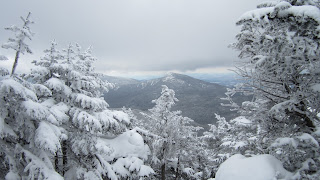 By the time I got to Garfield's summit the clouds were beginning to lift a bit and I could see back to the Twin Range where I'd just been. By now I'd been on the move for about 7 hours and I was hit with the realization that if it were summer I'd be back to the car by now. 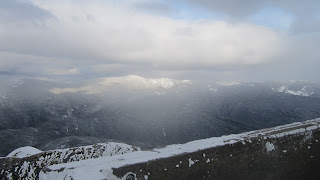 Somewhere around Garfield Pond I caught up to my friends. The long climb up to the Franconia Ridge looms ahead. 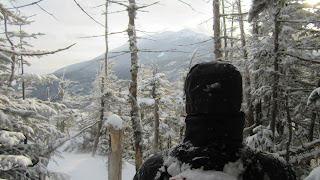 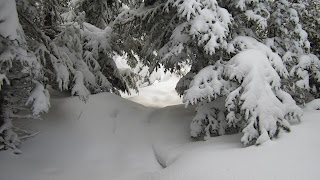 The last bits of sunlight begin fade out on back on the Bonds. 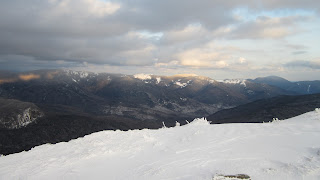 Darkness began to fill the valley below as we near the top of Mount Lafayette. 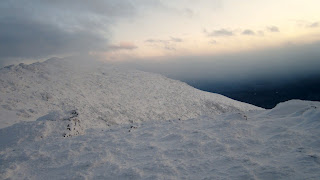 And we got a semi-cloudy sunset over Cannon Mountain. 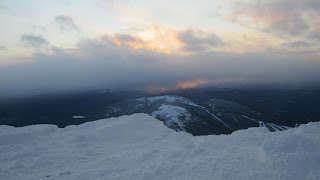 The ridge to Mount Lincoln in twighlight. Several miles ahead, our last peak for the day, Mount Flume is visible left of center. 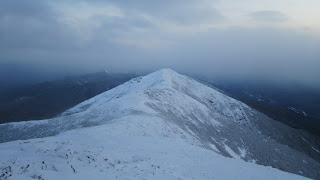 Farmer and Dangergirl coming up Mount Lincoln with Lafayette behind them. Shortly after this we put on our headlamps and dropped back down into the trees. 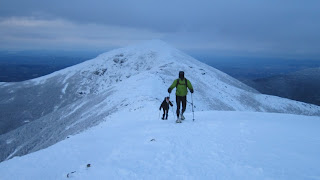 From Mount Liberty, the lights of the town of Lincoln down in the valley below. Hot food only a few hours away. 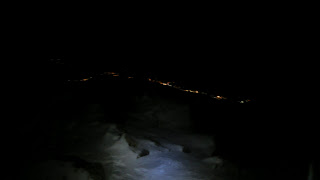 From there on out we just had an easy 5.5 miles of downhill on packed trail under the stars, arriving back at the car around 9 pm. Not a bad way to spend 14 hours with friends.
Posted by Adam Wilcox at 7:00 PM