The Boston Marathon... the one footrace everybody knows about whether they're a runner or not. I'm told it's a big deal. 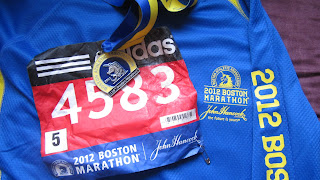 While a mega city road marathon isn't really my style, I can't imagine passing up the opportunity to experience a race of such reputation for myself. Key to an enjoyable experience, and I feel that this applies to so many things in life, would be to embrace the event for what it is and on its own terms. Leave the confirmation bias at home. Yes, I'd be just one person lost in a sea of tens of thousands of runners, surrounded by a half million spectators, in a sponsor-saturated and highly choreographed event. But, on the other hand, it's also one of the most historic races out there and carries so much weight that an entire city essentially comes to a standstill to spectate and cheer the runners on. Besides, when else can you run down the middle of Beacon Street without getting hit by a car?

There was also that nagging 3:07 marathon PR - so close to breaking the arbitrary three hour barrier. I knew sub-three was something within my capabilities, perhaps by a comfortable margin, but I didn't want to totally shift my training focus away from more epic goals in the mountains later in the year. Still, some higher intensity work might yield benefits in other areas and could provide good proof of improved fitness and maybe an early season confidence booster as well. Qualifying for Boston in the first place was something of a breakthrough in my running a couple years ago and meeting a reasonably demanding standard taught me how to accept a different, shorter and more intense kind of suffering that showed me I could push harder in ultras. I could certainly use a refresh.

Well, none of that actually happened and the race turned out to be something of an ego check. Forecasted high temperatures for race day were up to 89 degrees, the hottest on record for the Boston Marathon, and the B.A.A. put out numerous warnings and recommended that anyone with infirmities not start. Deferments were were being offered to next year's race for anyone who wanted them. But I've run in temperatures that high before without too much trouble, so how bad could it be? That's what I told myself anyway.

Early in the morning on race day I took a long bus ride from the Boston Common to the start in Hopkington then lounged around in the athletes village staging area, which made for plenty of time to relax and engage in some superb people watching as well. From my spot in the midst of tens of thousands of other people, I looked up and was able to count seven aircraft buzzing the area; four helicopters, and three small planes towing banners.

When the time came, we all walked to the start, the sun was already high in the sky and it was getting pretty warm out at 10:00 am. After a couple speeches, the national anthem, and other miscellaneous adieu,  they finally released the first wave of runners. My corral was much less crowded than I expected but it still took a full sixty seconds before the starting line passed beneath my feet. I quickly ramped up to a sub-seven minute pace and was able to maintain that for first 5k or so before side stitches and heat began to take over. It was a no-brainer decision to ease up and let go of any time goals I might have had. This way I'd get a nice long training run in and bounce back quickly to my normal weekly mileage.

I was dismayed to discover that the more I pulled back, the worse things got. The temperature continued to climb, there was little shade and the heat just seemed to radiate off the asphalt. I was drinking Gatorade as quickly as my upset stomach would allow but a couple pit stops confirmed that I was still getting dehydrated. The only thing that seemed to help was when I poured ice water over my head at every aid station and ran through garden hoses and spraying fire hydrants by the side of the road. Soon my socks were soaked and would squish water out the sides of my shoes with every step. While the spectator support for this race was unreal, with sprinklers, ice and popsicles being offered, somebody did try to hand me a shot at one point. I caught a whiff of tequila and nearly lost my lunch.

One welcome boost came around the halfway mark at Wellesley College, where I got to experience the famed "Scream Tunnel". There's not much like a few hundred coeds yelling encouragement and offering free kisses to brighten your day. Maybe they could become a feature of hundred milers as well. Wouldn't that be nice? Unfortunately the boost was short lived and my physical state resumed its decline. By now I was walking through the aid stations and struggling to get back into a run after each one. As I hit the Newton hills my quads began to cramp and my heart rate went way out proportion to my slow pace. After all of my long runs and hill training I found myself walking up Heartbreak Hill - not at all what I envisioned before the race.

Eventually I crested the bridge over I95 and, with only downhill remaining for the last 10K or so, decided to try to shoot for a sub-four hour finish. Passing by Boston College, the roadsides were jammed with cheering students and I got a huge boost from the crowd as I ran down fence line giving high fives to a couple dozen people in row. By now the Boston Skyline was getting closer on the horizon with skyscrapers visible in the distance. The Citgo sign, the bridge over Storrow Drive, Fenway Park off to the right, familiar landmarks passed slowly by. People packed the streets on both sides, perhaps ten deep, and their cheering reverberated off the building-canyons. With the finish line in sight a quarter-mile away, it was unlike any other athletic experience I've had. More commonly it's a small professional sports team or a band that's the subject of that much cheering, so it was kind of refreshing to see that sort of enthusiasm for 20,000 amateur runners.

Despite my best efforts, my weakened quadriceps held me back and my watch said 4:01 by the time I crossed the finish line. While the race didn't go nearly as well as I'd hoped, it was hard to feel too disappointed and I was glad to have slugged it out to the end. Seeing how I failed to re-qualify and I've got no other road marathons planned, it'll probably be a few years before I return as a runner. But, all in all, it was certainly a worthwhile and enjoyable experience and I'm glad I got to see the Boston Marathon for myself.

As for a race post-mortem, I'm still trying to figure out what happened and find answers to a few bothersome questions. Were my quad issues electrolyte-related? I would think eight S! Caps would be enough, but a course with less than a thousand feet of cumulative downhill shouldn't be nearly enough to cause the kind of fatigue I experienced. My training routinely includes routes with much more elevation change at a steeper grade and at a more aggressive pace. The weirdest part is that the rest of my legs feel just fine, with no notable hamstring or calf soreness.

With respect to the heat, why did I suffer so much? Granted, I've done very little warm temperature training this year and these were the hottest conditions I've run in since September, but I seemed to be affected much more than most people around me and was quite steadily passed for much of the race. Some slow-down was expected, but not this much.

And finally, what does this mean for the rest of the year? 2012 has been my best and most consistent training year ever. I'm running faster at a casual effort level, climbing stronger, and routinely knocking out 25+ mile runs on back-to-back weekend days. It's not like I didn't taper for Boston. Anyway, it's all in the past now and I'll have to focus on recovery and preparing for the TARC Spring classic 50K in two weeks. I'm very much looking forward to it.
Posted by Adam Wilcox at 7:36 AM