I didn't really start to feel it until Handies Peak.

Focusing on one step up at a time, trying not to send my already labored breathing and heart rate out of control, the top never seemed to get much closer. Everybody moves slower at fourteen thousand feet, but I was suffering from more than just the altitude. Thirty miles into the Hardrock Hundred, it was surprising that the inevitable took this long to catch up. My rule of thumb is to expect four weeks for full recovery from a hundred miler. I'd left the starting line in Silverton with a threatening soreness in my quadriceps and now the full body fatigue that was my souvenir from the Western States One Hundred only twelve days earlier was making itself known. While a few easy hikes and test runs earlier in the week had gone well, my feet were still too swollen to fit into the shoes I'd planned to use and I had to switch to a roomier backup pair.


Over the summit of Handies and down the other side, I did my best to pay full attention to the sensations I was experiencing - the exhaustion, the sight of snow streaked mountains stretching far off in every direction, my own foul smell, the anxiety of anticipating the next twenty-plus hours, my cold and wet feet. Each feeling was intense on it's own, but together they were a weapon against quiet desperation. I knew I was in a privileged situation and that I'd draw on this memory perhaps for the rest of my life. This is why I came back to Hardrock, even if it meant doing the Western States-Hardrock double; boldly going where perhaps a dozen people have gone before. Sloppy wet singletrack and snowfields led thousands of feet down to the Grouse Gulch aid station, but still not quite below the treeline. There, I knew I would get some help. I needed it.

I came to know Rob Erskine a few years ago after he broke my Maine Hundred Mile Wilderness FKT. Rob was second on the Hardrock wait list, so he was in Silverton, optimistically ready to run with Kristel Liddle as his pacer should a spot open up. Being all dressed up with no place to go, both Kristel and Rob offered their services as pacers to me. I'd never met either in person before, so I figured we'd have plenty to chat about. 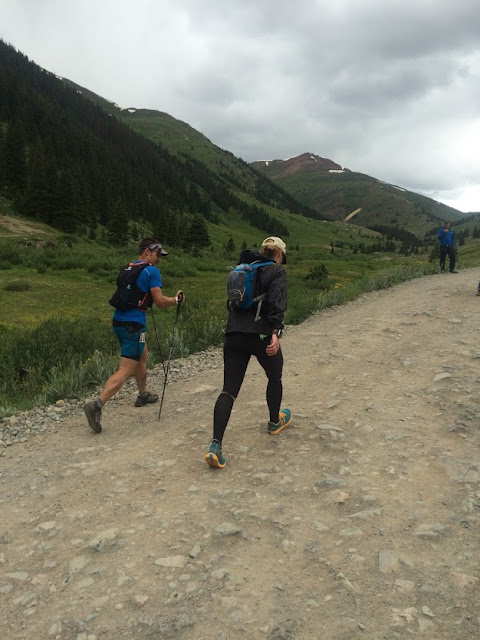 Under a light rain, Kristel and I hiked up the long road to Engineer Pass together. I'm generally a shy, introverted person so it's not often that I can get past my own social barriers to spend a few hours getting to know someone. Kristel was more or less a captive audience and our conversation helped me forget how tired I was for a while. 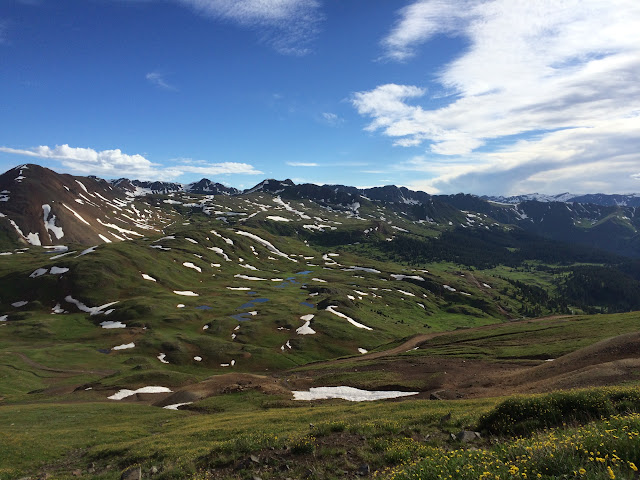 Maybe it was the loss in altitude as we descended past the fifty mile mark on the way into to Ouray or maybe it was just the dusktime boost I usually get during an ultra, but by the time we got to the Bear Creek Trail I was moving strongly again. Rob took over pacing duties in Ouray and night overtook us on the way up the old Camp Bird mining road out of town. After several miles the road gave way to steep trail, then hard frozen snowfields with a fixed rope leading up to Kroger's Canteen at Virginius Pass. Roch Horton supplied us with pierogis and a shot of tequila for Rob, fuel for our vertical mile of descent to Telluride. 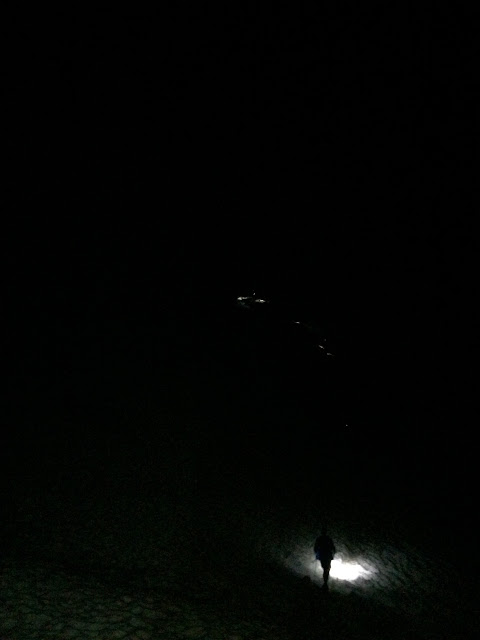 With thirty miles to go, Telluride would be the last major aid station before the finish. We arrived late at night, just after closing time, and jogged through the empty streets to give a wide berth to a couple staggering drunks. My family and Rob's sister, Dina had been helping out at the aid stations all day, but I hadn't expected anyone to make the long, late night drive to Telluride. I was happy to see my Dad there, always helpful with the aid station resupply routine and with his words of encouragement. Taking stock of the situation and thinking out loud, I saw that if we could cover the final section in less than ten hours, a sub-thirty hour finish would be possible.

Hours later, back above timberline in Wasatch Basin, that goal started to slip away. Rob and I were wandering around with Bryon Powell and his pacer, Joe Grant on a large snowfield in the dark,  trying to figure out where the hell we were supposed to go. We fanned out, searching for course markers and trying to make sense of the footprints that went in every direction. With a little bit of twilight, we could see two saddles on the horizon. One had lights on it, so we went that way first, punching through a shin-scraping breakable crust and making aggravatingly slow progress, only to see the lights moving over to the other saddle. We were going the wrong way and would have to posthole even farther to get back on track. It was cold, windy and starting to snow a little. I generally pride myself on being independently self-sufficient in the mountains, but in this situation I was happy to let Joe take the lead route finding. He was fresh and one of the most experienced people I could hope to follow. We finally crested the ridgeline and made a sketchy, exposed, descent on a hard, slick crust to get around a cornice and make our way to Oscars pass at dawn. 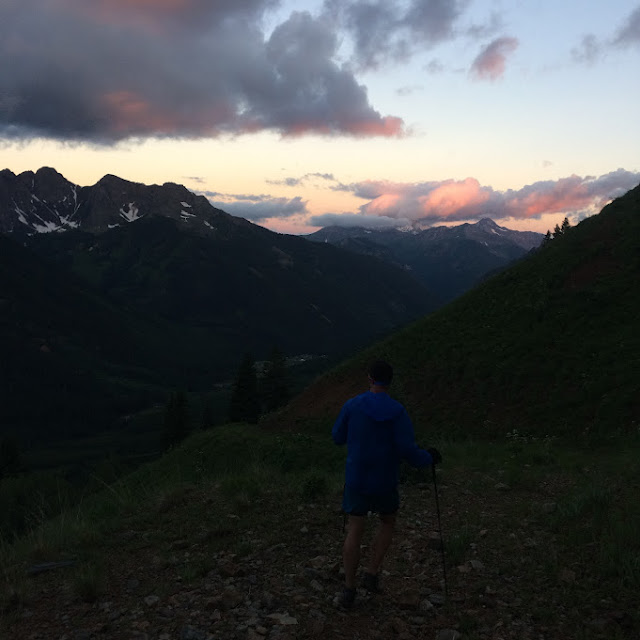 Bryon was moving well and he pulled ahead with Joe down the rocky, jumbled trail to Chapman Gulch. Rob and I were able to keep them intermittently in sight for a few miles until the loose scree climb up Grant-Swamp pass. We'd lost about forty-five minutes in Wasatch Basin and the rising sun hadn't done anything to help my energy levels. My dead legs and lack of sleep left me feeling deflated and unfocused. The thirty hour goal slipped away and I just resolved to make the best steady trudge that I could to the end. 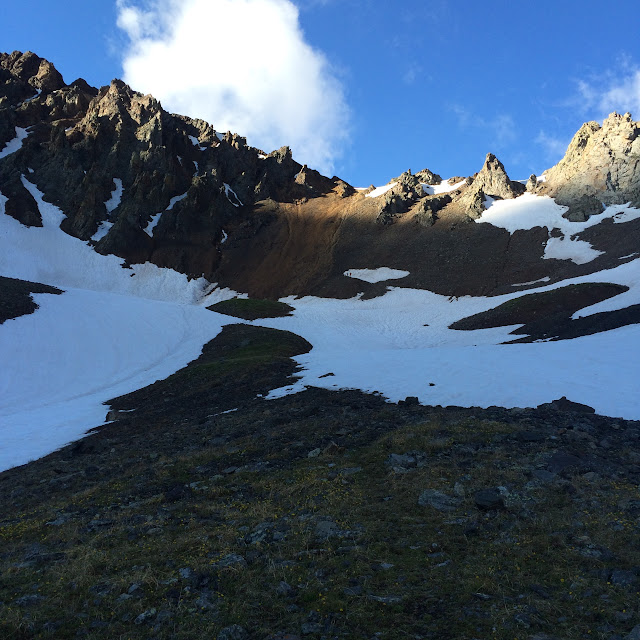 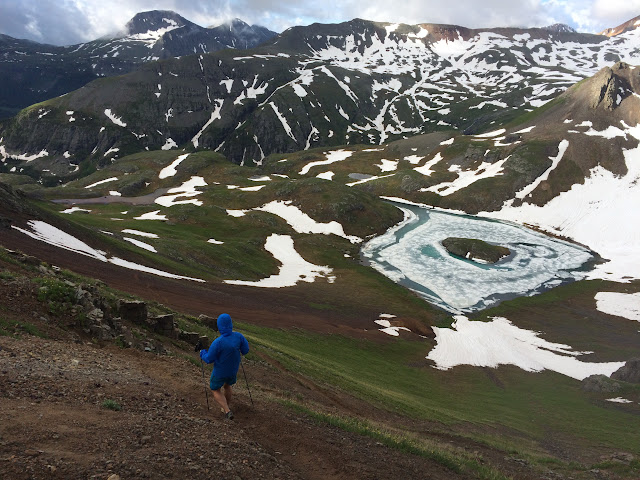 After the Kamm Traverse we had a thigh-deep river crossing, then one last two-thousand foot climb to make before the final descent into Silverton. The weather was looking ugly up in the high country ahead, with dark clouds and frequent claps of thunder. It wasn't lost on me that a Hardrock runner also named Adam was struck by lightning the year before. We were safe in the trees for the time being, though soaked in a cold down pour, and could only hope that things would clear up by the time we reached timberline. I guess it's a good thing I was pokey because the storm passed on and the clouds parted just in time for us to pass through a couple miles of alpine zone safely. I tried to pick up the pace when we turned downhill, but I'm sure the effort to actual speed ratio pretty dismal. I was also having minor hallucinations now as well. I kept wondering why there were hummingbird feeders on many of the tree limbs, only to have them transform into bits of orange flagging when I brought myself back to reality. 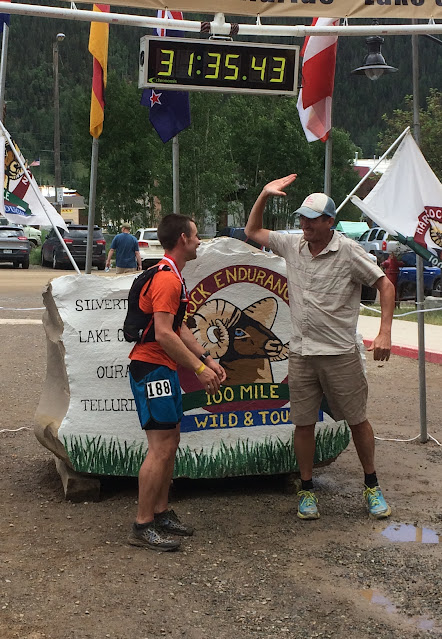 The last few miles of Hardrock are on dirt roads leading into Silverton and we managed to run most of them. It's funny to think how were practically done, but still had a full half hour to savor the accomplishment before actually finishing. I suppose it's all relative. After thirty-one-and-a-half hours I kissed the Hardrock for the second time and thanked my family, Kristal, Dina, and Rob. Andy Jones Wilkins was at the finish and, having heard about my Western States - Hardrock double, surprised the shit out of me with a hug and a high five that I almost didn't get my hand up in time for.

So, after all that, what did I learn? What profound developments in character did I undergo? After all the sacrifice and suffering and beauty and exhilaration there must be some kind of profound insight to show for it, right? I wish I had an expressible answer to those questions, but even six months later everything I can put into words seems inadequate. It was hard. It was fun. I explored more of my limits than I have before and pulled off the kind of accomplishment that will look good on my obituary some day. I made new friendships, renewed some sporadic existing ones, and feel like I've earned a place in the community. In the end, I suppose that's more than enough.
Posted by Adam Wilcox at 3:21 PM