You wouldn't think of southern New Hampshire as the kind of place that would be home to one of the toughest fifty mile ultramarathons around. The hills and mountains don't really stick out on the horizon all that much and most attention gets paid to the more prominent Mount Monadnock to the West and the much taller White Mountains to the north. However, running along the ridgeline divide between the Merrimack and Connecticut River watersheds is the Wapack Trail, a 21.5 mile hiking trail that's surprisingly rugged. The Wapack and Back 50 mile course does an out and back along the entire length of the trail, with an additional 7 mile leg thrown on at the end for good measure. Despite the fact that there are no sustained climbs over a thousand vertical feet, runners will have racked up about 12,000 feet of cumulative elevation gain by the time they complete a full 50 miles as result of the relentless steep ups and downs. To make things even more interesting, much of the footing on the Wapack consists of open ledges, shattered rock, mud, and roots that the Massanutten 100 would envy.

For the last two years I've volunteered as an aid station worker at Wapack, but for 2012 I figured it was about time for me to take a turn to run it myself and see what I could do. The course record of 9:57 had stood since 2008 and I figured that that was just about long enough. With a decent amount of training on the course, I figured that I had a good shot at going well under 10 hours. At the same time, I'd be using the race to test out a few equipment options for Hardrock, get my longest training run of the year in, and try not to push so hard that I'd have to seriously interrupt my training schedule for recovery.

This time of year it's just barely light enough to see well at 5:00 am, so that's when we started. I headed up Mount Watatic in the lead group of five runners before settling into a more comfortable pace as Josh Katzman and Eric Ahern boogied on ahead. Still, I kept up a decently strenuous pace with my heart rate in the 160s - running the downs, flats, and shallow uphills and hiking the steeper parts. Ryan Welts and Ben Thompson were with me over the open ledges of Pratt Mountain above Binney Pond where we enjoyed great views of the rising sun to the east and Mount Monadnock to the west. By the time we passed through the mile 9 aid station at Windblown it was down to just Ryan and I moving at a very similar pace. I've been running with Ryan for a couple years now and our abilities have always been closely matched, despite the fact that we both keep improving year after year. 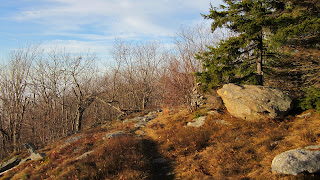 When we rolled into Miller State Park at mile 16, I was surprised to learn that the leaders, Josh and Eric, hadn't come through yet - they must have taken a wrong turn somewhere. Before I'd finished filling my water bottles they both came into the aid station, having finally found the crucial turn off from the descent down Temple Mountain. Ryan and I took off up the rockiest section of the course to Pack Monadnock with Josh closely following. On the descent down the other side, Ryan fell back with a troublesome quadricep issue. I would later learn that he turned around and walked back to Miller in considerable pain to drop out of the race. 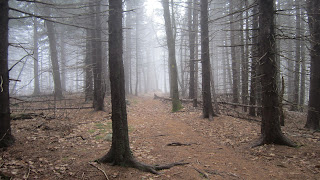 While I was able to hang with Josh on the technical downhills, as soon as we hit the steeps for North Pack, I felt a little over-strained for this point in the race and let him run on ahead. Still, when the turn-around appeared at mile 21.5 in 3 hour 45 minutes, Josh was just barely leaving the aid station. This would prove to be a pattern for much of the rest of the race - Josh would gradually pull away while actually running, only to have me catch up at the aid stations. While not realistically able to challenge Josh for the win, I was glad to make him work a little for it. On the way back over North Pack I got a good look at who was behind me and how close they were. I was happy to have a decent lead over Eric, Ben, and Justin Contois, but not so much that I could relax.

By now it was mid-day and the temperatures were reaching the upper 70s. Unlike the TARC 50K two weeks ago, I made sure to stay on top of my hydration and it seemed to pay off. While I did get some mild dizzy spells and nausea, it was only enough to be uncomfortable, not like some of the more serious symptoms I've had recently. To add a bit of insult to things though, I squeezed my gel flask a bit too hard while trying to eat and had the nozzle pop off in my face, leaving a sticky gel mess all over my chin and hands. Gross. The sad thing is that this is not the first time I've had this happen and I may just go back to gel packets to avoid it.

The hardest part of Wapack, I think, is the 7 mile out and back. Once you've returned back to the start/finish at mile 43, you still need to head back up over Mount Watatic for 3.5 miles, then turn around and come back a final time. With lots of food and an inviting car close by, it would be easy to call it day and relax. But, even though I was in second place, there was still over two hours left to go under the old course record, so back out I went. 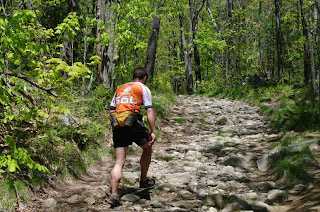 By this time I knew there was almost no chance of actually catching Josh but I still put in an honest effort the whole way. There were a few opportunities to heckle my friends Justin Contois and Kristina Folcik, both on their way inbound, that I took full advantage of. It must have worked because I wasn't able to catch Justin before he hit the finish area (mile 43 for him). The trip back went by quickly and I ran around the gate that serves as the finish line in 9:20, 37 minutes under the old course record and about 15 minutes behind Josh.

I think the most enjoyable part of the whole day was just hanging out at the end chatting with friends, basking in the sun, and cheering people in. To top it all off, Ryan proposed to his girlfriend Kristina, which just added to the general feeling of happiness and contentment. This might not be the most high profile race around, but damn was it fun. 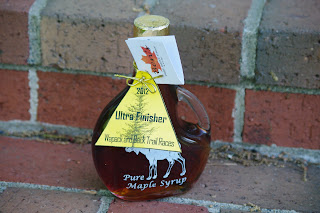