Most of my races I first hear about through word of mouth - Massanutten, Vermont, and Wasatch all have reputations that precede them and come with recommendations from friends. Pinhoti was a little different. Browsing the race schedule on Stan Jensen's run100s.com, I stumbled across Pinhoti and everything about it appealed to me. In early November, it fell outside the normal ultra season, so there wouldn't be any scheduling conflicts. It's in Alabama, a part of the country I've never been to before and I'm interested to see for myself. And finally, it sounded like a legitimately interesting course; 100 miles point-to-point route on the Pinhoti National Scenic Trail, with a healthy focus on single-track through the Talladega National Forest. Why not? And just like that, I committed to my fifth hundred miler of 2011.

Coming off a very strong finish at Wasatch eight weeks earlier, I have to admit that I had pretty high expectations for myself at Pinhoti. At the pre-race meeting I was a little shocked to find out that other people knew who I was and had high hopes for me as well. A bit to my chagrin, the words "18 hours" got thrown around a little. Still, visions of a podium finish were hard to ignore even though I haven't really felt 100% since coming back from Utah. In the end I just wanted to run my own race and settled on a loose goal of sub-20 hours, with lots of wiggle room for my position on the field and how I was feeling. 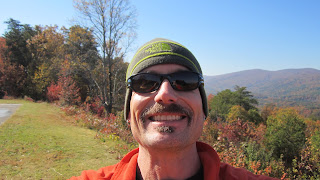 My good friend Nate, volunteered at the last minute to crew and pace me and I'm not sure what I would have done without him. I was originally planning on going down alone and using drop bags, but I jumped at the chance to have a familiar face along. This would speed up my aid station changes and, perhaps most importantly, provide me with a familiar face to look for. As corny as it sounds, hundred milers still tend to break me down a bit emotionally and encouragement from my crew at each aid station is sometimes the only thing that keeps me going. I've traveled with Nate for runs before and as another ultrarunner, he knows how to play the game and could relate to what I'd be going through. I had no idea how crucial he'd turn out to be later in the race. 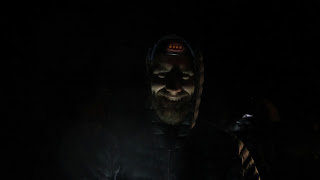 It was 40 degrees and pitch black at the 6 am start at a campground in Heflin, Alabama. I was already feeling grateful for Nate's help, as I was able to wear my down parka right up until the very last minute before the race director said "go!" Go out easy, see where the first 25-50 miles get you, then make your move if you've got it, I told myself.  I say that every damn race and it didn't work this time either. Running onto the first section of the Pinhoti Trail  I was virtually on Karl Meltzer's heels, a place I didn't really have any business being. He began to pull away but I stuck in the middle of the chase pack with about 4 or 5 other guys at what honestly felt like an easy enough pace. This isn't so hard, of course I can do this all day. 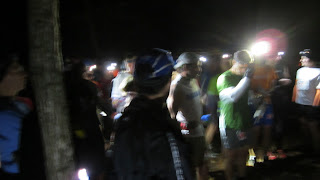 We made quick work of the first few miles of trail and as it got light out, I was impressed at quality of the course. Smooth, rolling singletrack covered in leaves, and never too steep to run easily. In fact, it felt shockingly similar to the mountain bike trails I train on in southern New Hampshire, with only some odd looking plants to give it away. Every time we approached a steep hill the mountain runner in me slowed down a bit, expecting to be sent up by the steepest course possible, only to switched-backed off. Nearly every hill was like this for the duration of the race, always approached gradually, never directly, with lots of switchbacks and long traverses. One thing I found a little odd, though not unpleasant, was that the trail would often take a long, gently rising traverse for half mile or so up a drainage, cross the stream near its head, then gently traverse back down the other side. Only a couple hundred yards away through the woods, you could see the trail you'd been on nearly a mile ago.

Our pack began to lean out a bit and I was suprised to find myself in second place as we went through an area that looked like it had been clear-cut. Dead stumps and brush were everywhere, with an increasingly hot sun beating down as the temperature rose into the upper 60s. I noticed that most of the stumps had been uprooted from the ground before being chainsawed off and figured this must be the tornado area I'd read about in other race reports. The complete destruction was impressive.

The second aid station is located right next to a set of railroad tracks and as I approached I could hear the sound of a train coming. I grabbed a couple items as the volunteers urged me to get going before the train arrived. I sprinted out to the tracks where the train was only a few hundred feet away, but luckily for me it was moving slowly and I was able cross safely. Nate later told me that it was so long that it took nearly five minutes for the whole line of cars to go by, stranding a few runners for what must have felt like an eternity.

At aid station 3, I was still holding up pretty well but beginning to feel fatique creep into my legs, much earlier than I would have liked. Nate changed my bladder out like a pro, said a few encouraging words, and took the time to do the little important things, like make sure my bladder tube was routed the right way to keep it from getting kinked or chafing my back anywhere. I got a burst of adrenaline as more people began to filter into the station and tried to leave before Nate was finished. He litteraly held me in place by my hydration pack so he could finish what he was doing.

The urgency didn't last too long, as I realized that I just didn't have a stellar performance in my legs today. I'm  not sure whether it was the cumulative effects of so many race miles this year, but my training was more focused on recovery from Wasatch than than actually building up my capabilities. I began to walk more and more as several people passed and didn't make any effort to chase them down. I kept reminding myself that I was damn fortunate to be where I was, even a year ago I'd have had a hard time believing that I'd ever be in the top 10 at hundred mile race. Hiking the gentle grade up to the top of Mount Cheaha brought me to a little over 2,000 feet and the highest point in Alabama, with a decent view from the top. Nate met me again and knew all the right words to say. He knew how I was beginning to struggle, but I tried my best not to externalize any specific aches or pains, mostly because I didn't want to acknowledge them to myself. 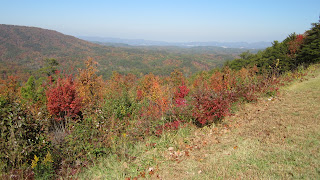 Coming down the backside of Cheaha was a notorious section of trail known as the Blue Hell. I didn't find it to be quite that exactly, moderately rocky like you'd find in the White Mountains, but pretty manageable. Still, it was easily the most rugged footing on the course. From the bottom, a stretch of pavement and some jeep roads led me back onto the Pinhoti Trail.

It got dark for me somewhere around mile 60 and I began to get lonely. At first, I hadn't anticipated needing a pacer, but by the time I got to Porters Gap at mile 68, I asked Nate to come with me. We shuffled along together in the dark, alternating between animated conversation and me being sullen and quiet, Nate took it all in stride. I was walking more and more, a little disappointed with myself, but I kept trying to remember there were a whole lot of people behind me who'd be grateful to be this far ahead. At a few points I showed more weakness than I would have liked, stopping to rest with my hands on my knees and groan for a bit. Nate responded with his peculiar method of motivation, "get moving or I'll get in front of you and fart."

We ran along for a while on some sort of ridge line as the temperatures dropped and the wind picked up and whipped through the trees. Each aid station was a little oasis in the night with, campfires, friendly faces, food, and a little shelter from the wind. I was a bit disoriented as to where we were, I hadn't memorized the names and mileages of the aid stations and I'd somehow managed to misplace my pace chart. Each time we arrived I'd get confused about how far we had to go and how badly our pace was retreating. At one station, the volunteers were actively struggling to keep their EZ-up tent from blowing away. It would flap and jump around violently, threatening to upend the food table it was anchored too, Gatorade coolers and all. We made sure to thank the guys for their time, especially on a night like this.

The miles dragged on, but eventually we came down off the ridge line and out of the wind. A long series of dirt roads brought us through the final aid station and back onto pavement where a long straight uphill stretch led into downtown Sylacagua, Alabama. There was a headlamp visible ahead of me, and one behind, but I didn't really have the wherewithal to chase one down, or run hard to escape the other, and we entered the  football stadium that marked the finish. 200 meters around the track and hundred-miler number seven was in the books in 22:49:57; good enough for 10th place. 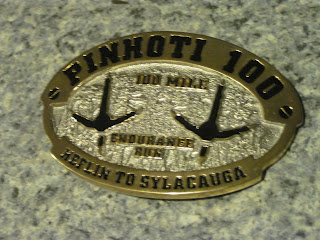 With its own little niche cut out, I can see the Pinhoti 100 going places in the future. It has the right combination of a great course, excellent organization, accessibility, and scheduling that I'd be happy to recommend the race to anyone. I'm not sure how next year will play out for me but, not feeling like I ran the best race I could run, I feel like I have unfinished business here. Maybe I'll be back to settle the score.