The Wasatch Front 100 Mile Endurance Run; my first western race and (almost) the most challenging course I've encountered. As a runner from low (but not flat!) New Hampshire, I really didn't know what to expect. With 27,000 feet of elevation gain, altitudes of over 10,000 feet, and steep climbs and descents called intimidating things like Chinscraper, the Grunt, the Dive, and the Plunge how would I, as an east coast lowlander fair? As it turned out, this race was right up my alley.

As with all hundred milers, a lot of people went into the race with big dreams of running a sub-24 hour pace and I knew that the majority of them would be humbled. I had those same dreams, but realized they were one hell of a stretch goal. Even more ambitiously, I secretly coveted a top 10 finish. I just hoped that my training, preparation, and planning would let me be one of the lucky ones.

The race started with little fanfare from East Mountain Wilderness Park in Kaysville, Utah. The first few miles were on the rolling double track of the Bonnevile Shoreline Trail and I found myself expiencing the same familiar feeling I get at the start of all my hundred milers. Aren't we going too fast? Why are there so many headlamps in front of me? Maybe sub-24 isn't in the cards today. Should I be worried about that little twinge in my hamstring? Do I have rocks in my shoes already? It always plays out the same way and I can do nothing but let the race come to me on it's own.

The trail we were running on was very dry and so much dust was being kicked up by the hundreds of running feet that it looked like fog in the beam of my headlamp. The dust began to cling to my skin, already damp with sweat and I was glad when we turned onto the first steep climbs of the day and the pace slowed. Just like the start of a Presidential Traverse, we went up over 4,000 feet in only a few miles, and I felt right at home.

By the time we topped out on Chinscraper it was fully light out and we were treated to a gorgeous panorama of the Salt Lake City valley below. I tried hard balance gawking at the view with running the winding singletrack through an open grassy sagebrush area. The trail was overgrown by thigh-high brush at times and I had to tolerate a lot of scratching and scraping on the bare skin of my legs. I lost a bit of blood through here but no worries, I told myself, all this dust will help things clot right up! Despite all this, I was able to make good time to the first water stop at Groebben's Corner at mile 13.

Onward to Francis Peak, where a stiff breeze made it tricky to make meaningful forward progress and I was often blown off the side of the trail. Things got a bit chilly and I was glad to have brought a thin pair of fleece gloves along. Descending the peak was a long and steep dirt road that I had been forewarned about. Many people hammer down this section in an effort to bank time, but end up frying their quads instead. I made an effort to take it easy and arrived at the bottom in good shape, having lost a few positions in the process. Oh well, it was still much too early in the race to worry about that. Quick aid station visits and some more fast singletrack would help me move up through the ranks soon enough.

The section leading up to the Boutiful B station (mile 24) was a bit of an adventure. Much of the course was on rough and overgrown deer trails. Often the brush was over my head and there were many blow-downs to clamber over, around, and under. While there was a lightly beaten footbed to follow, this was clearly an unmaintained section and some route finding skills were helpful. Again, my experience bushwhacking in the White Mountains served me well and I was able to push through without losing much time.

I reached Big Mountain aid station at mile 40 still feeling strong. This would be the first station my support crew could get to due to extensive construction and storm damage to access roads on the early part of the course. The atmosphere at the station was full of energy  and noise. There were so many cowbells, airhorns, and other noisy things that it sounded like a one man band falling down a few flights of stairs. I was happy to see my family who'd flown out to Utah for vacation, but only for a few moments. Not lingering long, I was soon on my way and passed the eventual women's winner Becky Wheeler on a small uphill. Shortly afterward I caught up to Jared Campbell who I'd leapfrog with for the next 15 miles or so. He offered me some valuable advice about being conservative in the heat of the day, the layout of later parts of the course, and even saved me from taking a wrong turn at an unmarked junction on the way into Lamb's Canyon. Overall, with a few exceptions, I found the course markings to be sparse but adequate. This was rather refreshing, rather than having a glut of paper plates or surveyor's tape every few hundred yards, only trail junctions and a handful of confidence markers were set up. 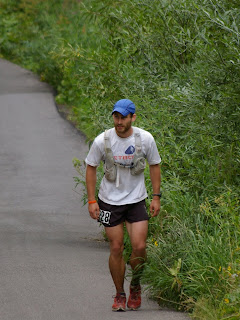 From Lamb's to Millcreek Canyon was a tough climb for me over Bear Ass Pass. I hit a bit of a low spot here and ended up walking much of the paved road on the final approach to Millcreek (62 miles) not feeling so good. How could I be walking such a shallow uphill on pavement? Fast people don't do this. I'm slipping off a 24 hour pace, aren't I? When got to the station station I was surprised to learn that I was up to 8th place and over a half hour ahead of schedule. I realized I was being a bit tough on myself and I was still doing quite well.

An easy climb to Dog Lake on the Upper Big Water trail led to some more singletrack, this time through beautiful groves of aspen. I encountered a few mountain bikers, all of whom were very polite, out for an evening ride, as well as a moose off in a meadow, munching on his dinner. Mmmm... dinner. Lately I've been using GU Chomps to break up the monotony of gels, but was craving solid food. A cup of chicken noodle soup and a handful of salt and vinegar potato chips from one of the aid stations hit the spot. Popping out once again on an open ridge line, I was rewarded with a crimson red sunset over the mountains beyond the Great Salt Lake. I could see Antelope Island in the middle of the lake, as well as all the lights beginning to come on in the valley, revealing the straight grid pattern of streets that's peculiar to the west. Past a rather extensive collection of antennas, transmission towers, and maintenance sheds and I followed a long downhill jeep road, turning to pavement, which led me to the lodge at the Brighton ski area at mile 75 and 10 pm. 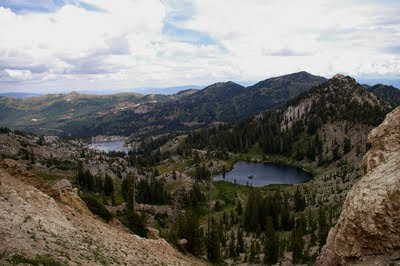 I departed Brighton in the dark with fresh socks, an MP3 player, and some warmer clothes. Climbing up to Catherine Pass and Point Supreme, the high point of the course at over 10,00 feet, it got a bit chilly out and I could see my breath in my headlamp. I'd been running alone for quite some time and wouldn't see my family again until the finish, so it was nice to have music to keep me company. For this race my pacer would be the soft, soothing sounds of the Dropkick Murphy's, Agriculture Club, and Tool.

The last 25 miles of Wasatch are characterized as the hardest, with relentless ups and downs on loose, eroded ground. I struggled up the Grunt which was quite steep, even with switchbacks, and made my way to the top of the Dive and the Plunge. Dropping hundreds of feet down a series of steep ravines, these "trails" were horrendous. Imagine an eroded trench about a foot deep and a foot wide filled with fine sand and potato sized rocks and you'll get the idea. Thick brush on either side ruled out running anywhere but actually in the trench where it was impossible to get into a good rythm. Each step sprayed sand and gravel into my shoes and my already sore toes were constantly banged into the rocks. I knew I was doing damage to my feet and felt both my big toe nails start to wiggle loose. Occasionally I'd stub my toe (harder than usual) and the pain would make me howl out loud.

Soon enough, the trail flattened out a bit and I was approaching the last aid station at mile 93. But what's this? A set of lights behind me? They were perhaps a quarter mile back and despite my best efforts, gaining fast. I tried to drop them by blowing through the aid station but they continued to close. I'm not sure I can run like this for another 7 miles. Hammering down slopes I would have only cautiously walked a few miles earlier, I felt like I was redlining, and I continued to bleed ground. They're catching you too fast, just let them have it. But still I ran, even when I could hear footfalls close behind me and saw my shadow stretching out ahead from someone else's headlamp. A few flooded sections of trail came up and I didn't bother looking for a dry way to cross, I just splashed through carelessly. And then the we hit an uphill. I flew up it faster than I'd run any hill all day and the lights finally began to fade a little. Rounding a slight blind corner, I shut all my lights off, playing tricks and trying to convince my pursuer that I was farther ahead of them than I really was. It seemed to work until I tripped on a log and landed on my face. I fall a lot, but I don't remember ever getting dirt in my mouth before this. No time to worry about that, I got got back on my feet and was soon spit out of the woods and onto the final mile of pavement with no one else in sight. There was a strong moon to see by, I kept running hard with the lights out until I hit the finish line at the Homestead in Midway where my wife and family were waiting for me. 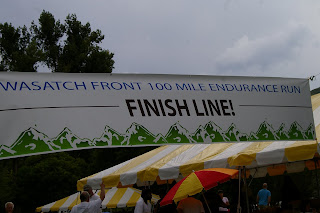 22 hours 45 minutes and eighth place on one of the hardest mountain hundred milers in the country; a result that I could have hardly dreamed of a day earlier. About two minutes later, ninth place came in and we congratulated each on other on putting up a good fight.

After a good night's sleep, I came back to the finish area to cheer the remaining finishers in. My good friends David and Norm both finished and completed a summer long series of hundred milers known as the Grand Slam. I was happy for then both. 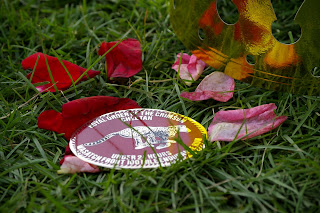 With all that behind me, and a few days to reflect, I have to say that Wasatch has become my favorite course so far. While the Hundred Mile Wilderness was more difficult, it'll be hard for any race to make up for Wasatch's scenery, and the sheer pleasure of running for miles on open ridgeline singletrack. That being said, I sent in my Hardrock Hundred application today...