Monday: 8.1 miles, 643', 8:47 pace. Now that the snow is melted, I took the opportunity to do some Manchghanistan trail scrounging. Temps were win the mid-70s and I did my best to just ease into it.

Tuesday:
AM: 9.8 miles, 591', 7:05 pace. I almost didn't get out of bed, but reminded myself of the warm temps. 55 degree mornings are pleasant to run in and, despite feeling a little creaky to start, I felt good enough to throw in some miscellaneous pickups and make it a fartlek run. Most of them were just smooth accelerations uphill for a few telephone poles, but also some ~5 minute up and downhill ones as well. It all went well, considering I was also running in a fasted state.
PM: 6.8 miles, 372' gain, 8:27 pace. Exercised some restraint and actually ran slow on my lunch run. 80 degree temperatures helped.

Friday:
AM: 9.8 miles, 591', 7:35 pace. Managed to drag myself out of bed early enough to do the usual route. Scoped some beav' in the swamp on Podunk Road. Spring peepers, phoebes, robbins and turkey calls are making for a much livelier morning soundtrack lately.

I've wanted to run this one for a while now and this was the year it finally fit in the schedule. Traditionally in April I've done races like Traprock 50K and the TARC Spring classic as early season tune-ups, but this year I was in the mood to try something new. Breakneck, held on the banks of the Hudson River, offers nearly as much elevation gain as the Pemi Loop, and I was surprised to learn how technical the terrain was. This video from 2015 was what really sold me on it.

Ben Nephew was the only competitive name on the entrants list that I recognized but, being outside New England, I didn't recognize most of them. I set no real competitive goals and just wanted to explore a new area and enjoy running hard on some snow-free trail after a long winter. As such, I didn't let it bother me when I was around 15th place for the first mile. By mile two the field had settled down a bit and I'd caught up to the lead pack without straining myself. This provided some useful feedback on my current fitness level as I was often able to gain ground on the flats and downhills, but would quickly give it back on the climbs when running with the other guys - likely a direct result of running on the road for most of the winter.

Another insight was gained by having run the Hyannis Marathon less than two months prior. Despite taking nearly twice as long to cover the same nominal distance, I was willing to accept a much higher exertion level at Breakneck, in the form of very high breathing and heart rates on the steepest climbs, well over lactate threshold. At Hyannis I tried to settle into a steady pace and gradually increase my exertion level to hold it consistently over the course of the race (that was the idea, at least). My mile splits were all between 6:24 and 7:29. A tough trail marathon is really more like a long set of intervals; climb hard for 15 minutes, then recover on the downs, so you shift the load around between different energy systems and muscle groups. My Breakneck splits varied from 6:23 (309 feet of loss) to 21:24 (1031 feet of gain). I see lots of hill repeats in my future.

By about the halfway mark the packed thinned out and I settled into fourth place. I'd occasionally catch a glimpse of Ben through the tree about a minute ahead, but he grew his lead and disappeared. I ran alone for quite a while before catching and passing another runner who was out of water, like me. With a course reroute this year, the overall distance was closer to 28 miles and there was a rather long stretch to get to the last aid station. I pushed a bit on the last few miles, descending hard to lock up my podium spot and finished in 5:22 - good enough to take home a bottle of wine and a blueberry pie. 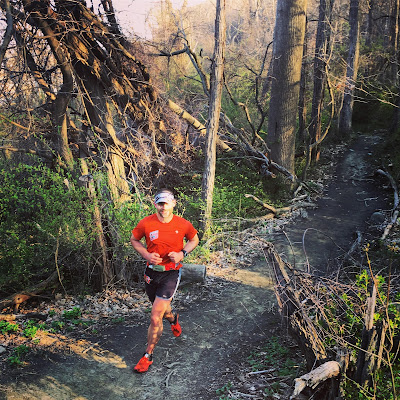 Sunday: 5.2 miles, 307', 9:32 pace. Easter Sunday recovery run, trying to resurrect my sacrificed quads - paying for those last few miles at Breakneck. It was worth it.