One thing I've come to accept is that this car, like many projects, is as much about the process as the end result. I have a habit of finding things that aren't broken and fixing them until they are. Still, there's value in that, as it's helped me become even more familiar with every part of a car I plan to keep indefinitely and I've been able to use it as platform to build new skills. There's kind of a vague end goal of a car that's faster, more fun, and more unique. I view this as being in the original vein of hot-rodding as it was mid-century, with a strong DIY ethic. Over the last year I've made progress in a few areas. 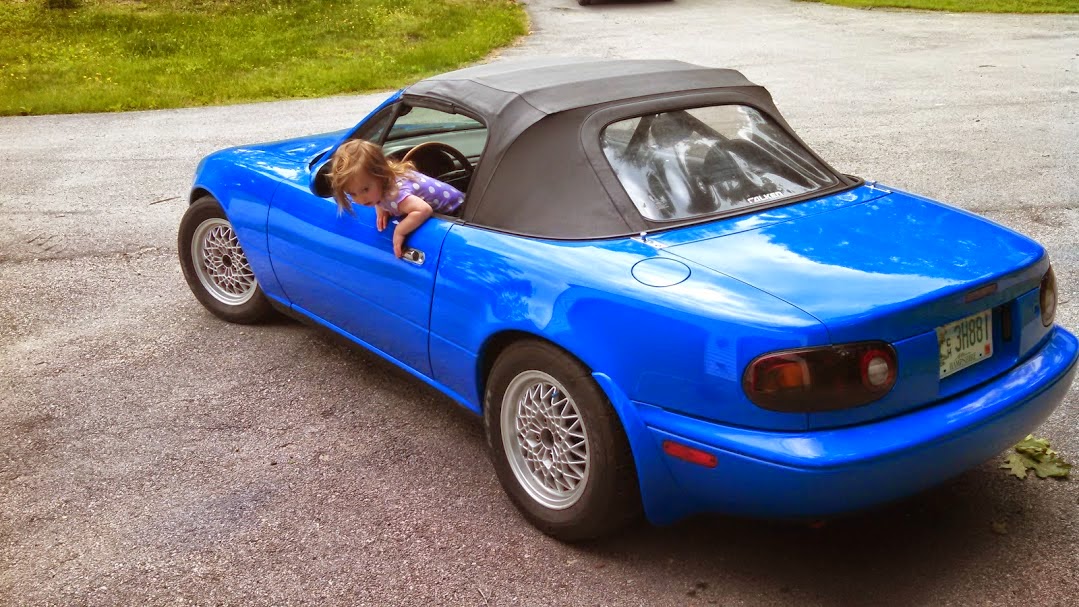 First up was the building of a Megasquirt stand-alone computer to entirely replace the Reagan-era unit that the car left its Hiroshima factory with in June of 1989. This will control the fuel injection and ignition systems with much greater precision as well as allow me to swap in more modern parts (like higher flowing fuel injectors out of a Mazda RX8, a throttle position sensor out of a BMW, and ignition coils from a Toyota Corolla) and customize nearly every engine operating parameter to my own needs by connecting a laptop. More power, greater fuel economy, and the capability to support even more power in the future is the goal here, provided you know what you're doing.

To save money and educate myself, I decided to order the Megasquirt as an unassembled kit of circuit boards, chips, and tiny electronic components that have to be soldered in place very methodically. If you screw it up, the computer doesn't work. I generally prefer mechanical things because I can see how they work; electricity, being invisible, is indistinguishable from magic to me. When I started this project I didn't know how to solder electronic components. I do now. It worked, and the moment I got my car to start and run controlled by a computer I built myself was pretty rewarding. 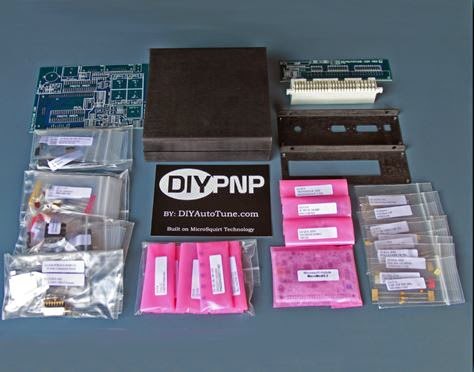 Now, rather than using a mechanical flapper door to quantify how much air is coming into the motor (and how much corresponding fuel to inject), the new computer uses a more accurate method of measuring temperature and pressure to determine the mass flow rate of air coming in. This allowed me get rid of some bulky components on the driver side of the engine bay, space I'll need later. 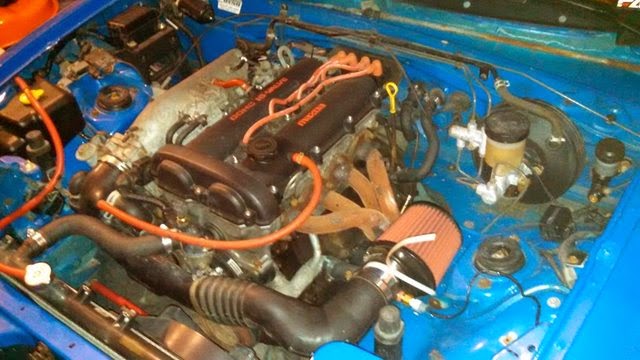 This is a terrible picture, but I mounted a boost/vacuum gauge and an air/fuel ratio gauge in the dash to keep an eye on things. There's room for more gauges below the radio, but I had to put filler panel there for now. 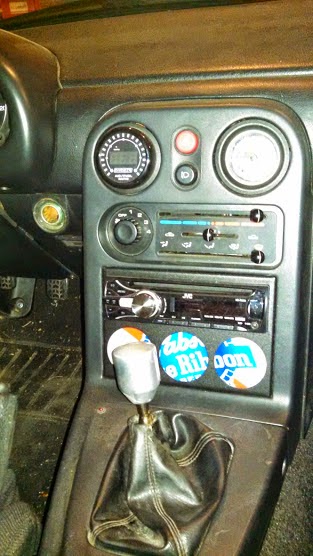 Then I tore down and re-built the rear suspension and drive train. Things were pretty messy under there: 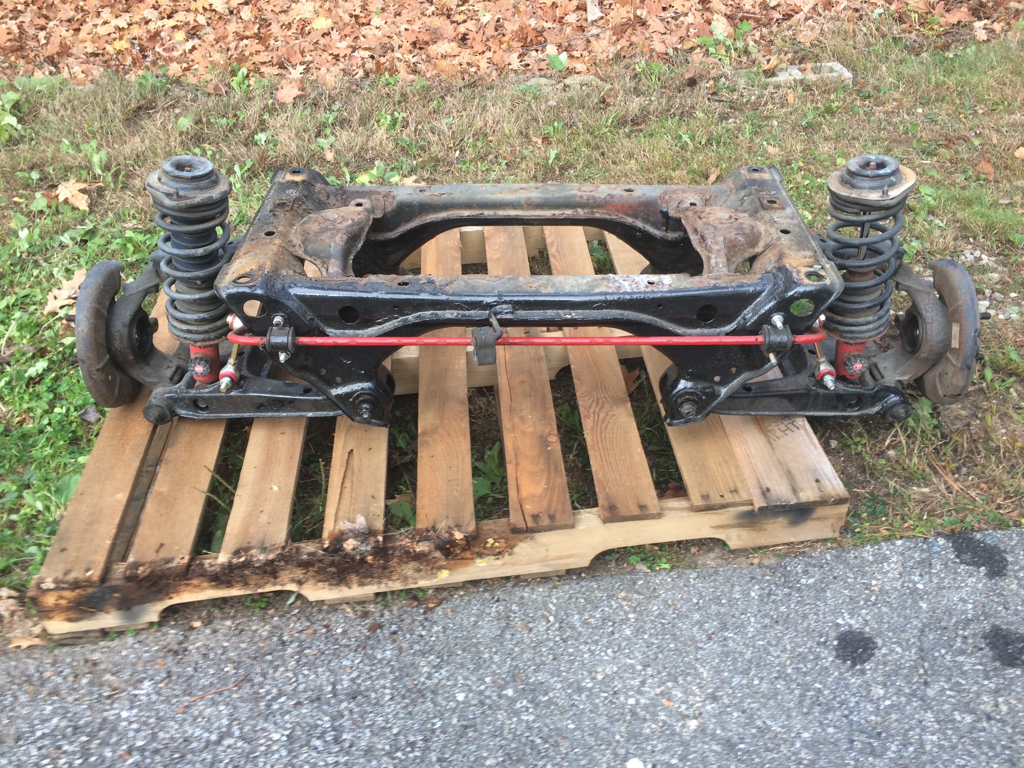 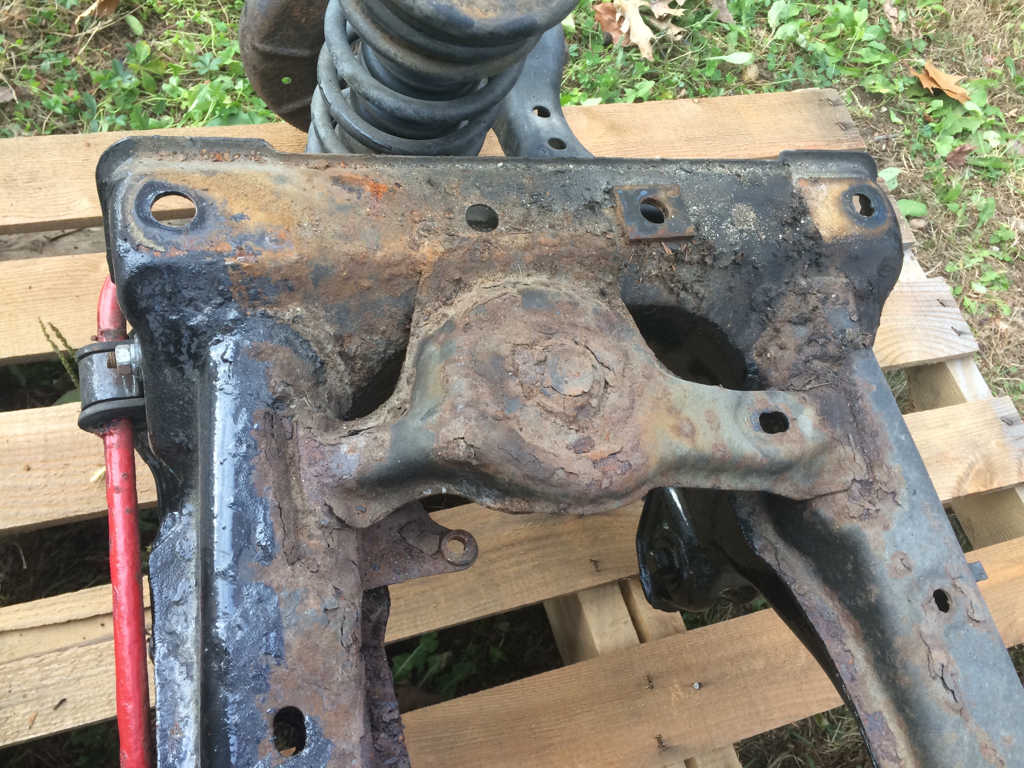 A few hours with a wire wheel and some paint made it look much better: 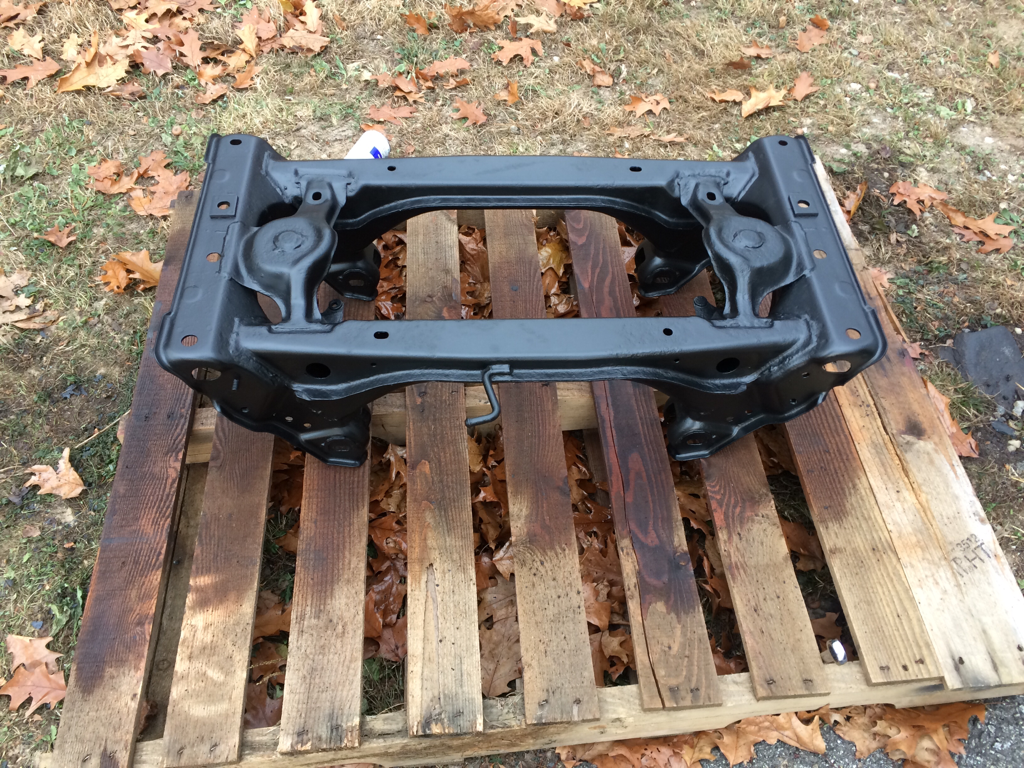 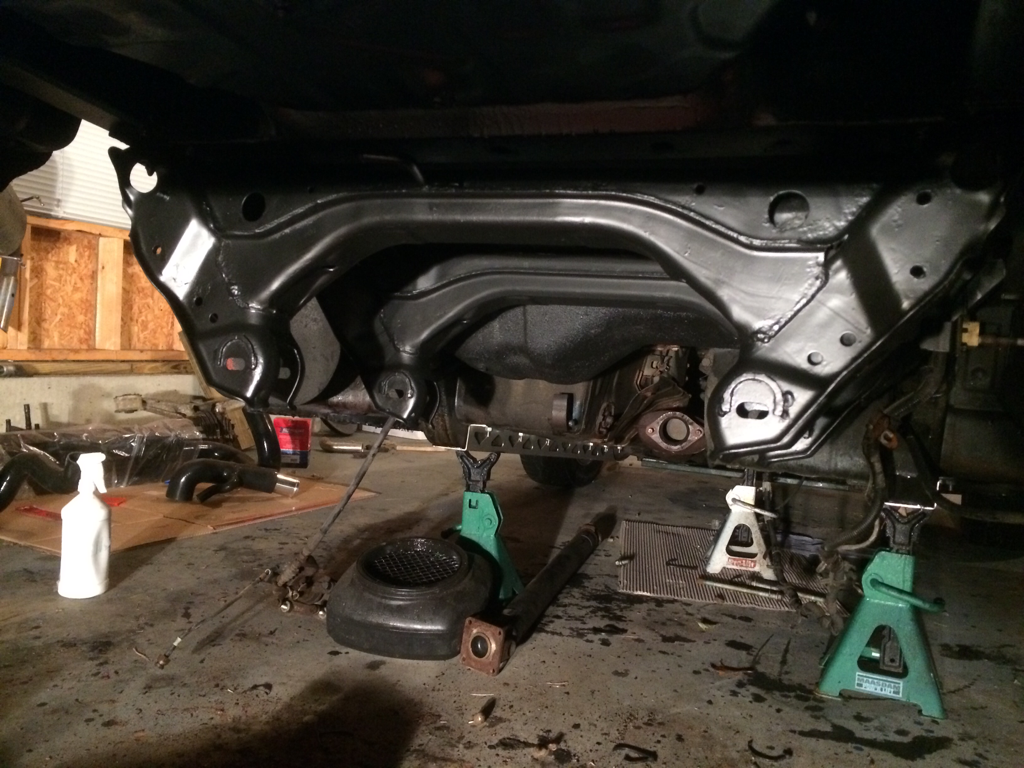 While I had everything apart I installed new wheel bearings, which I had to disassemble, clean, and repack with grease that doesn't suck. Then I reassembled the bearings with new hubs and extended wheel studs. 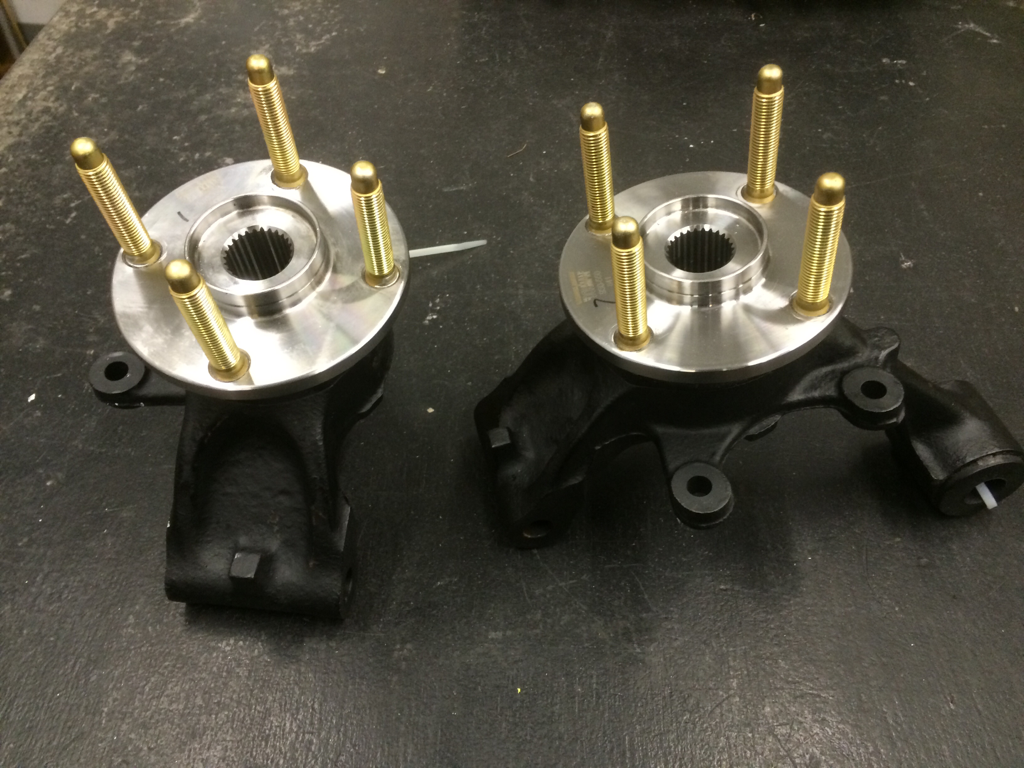 I also did the fronts, as well. 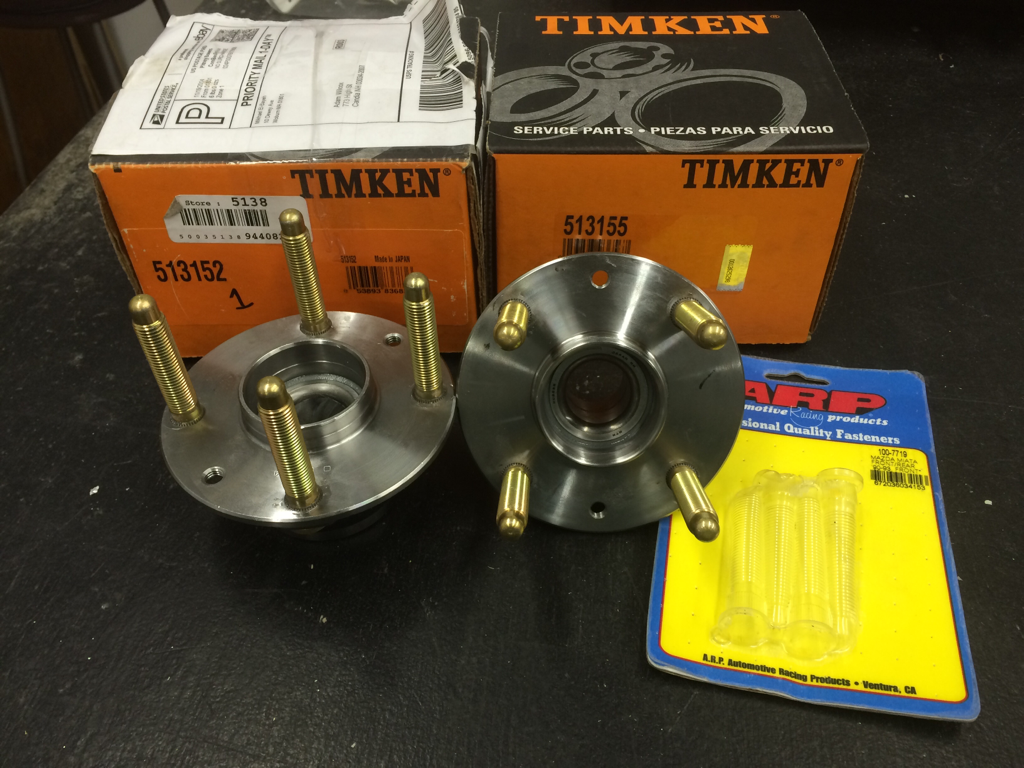 This was also a good time to strip and repaint the suspension control arms as well as add grease fittings for my polyurethane bushings to keep things operating smoothly and without squeaks. 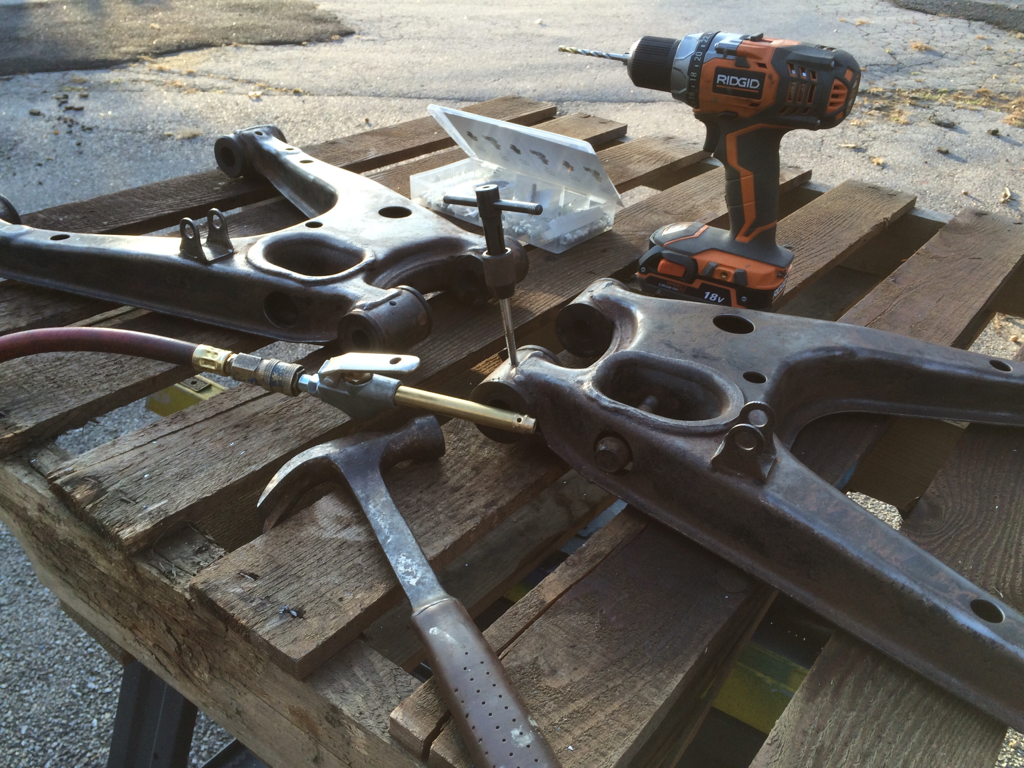 While I was putting everything back together I upgraded the rear differential to a limited-slip Torsen-unit out of a newer Miata for better traction and strength, as well as new axle shafts. I also have new springs and shocks on order that should ride and handle much better than the red KYBs seen here, but there's been some shipping delays on those and they didn't arrive before I had to put the car back together for the winter. 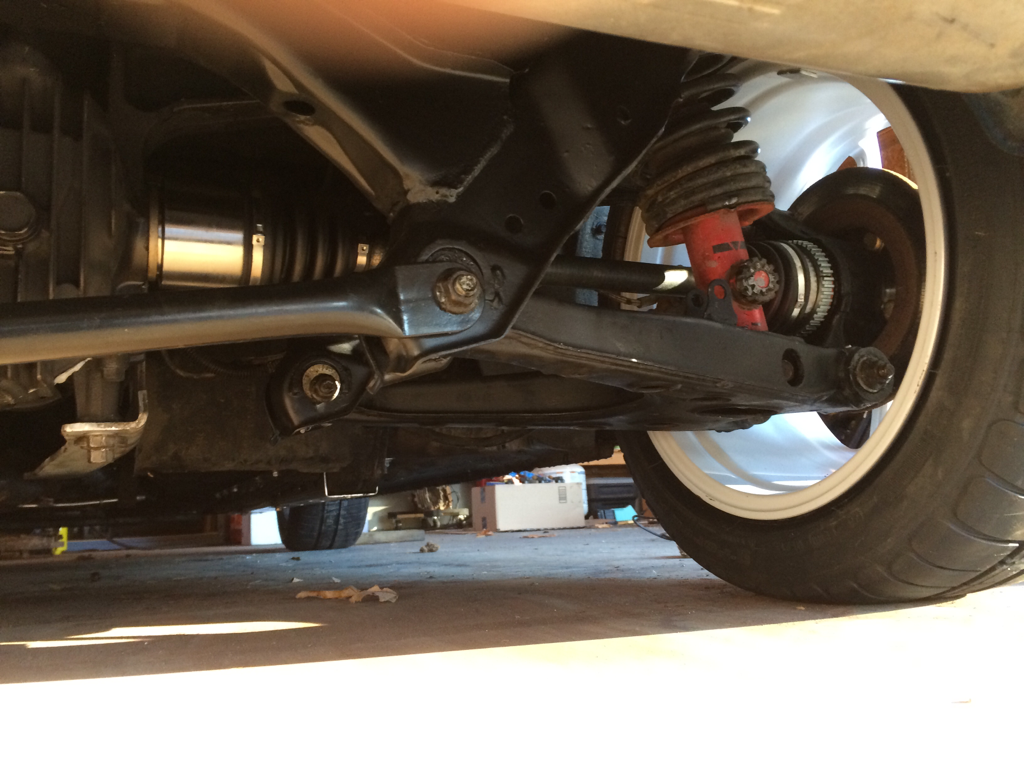 I also got new stronger, lighter wheels, 15x8 inches, rather than the old 14x6 inchers I've had on there for years, plus some wider, stickier tires. 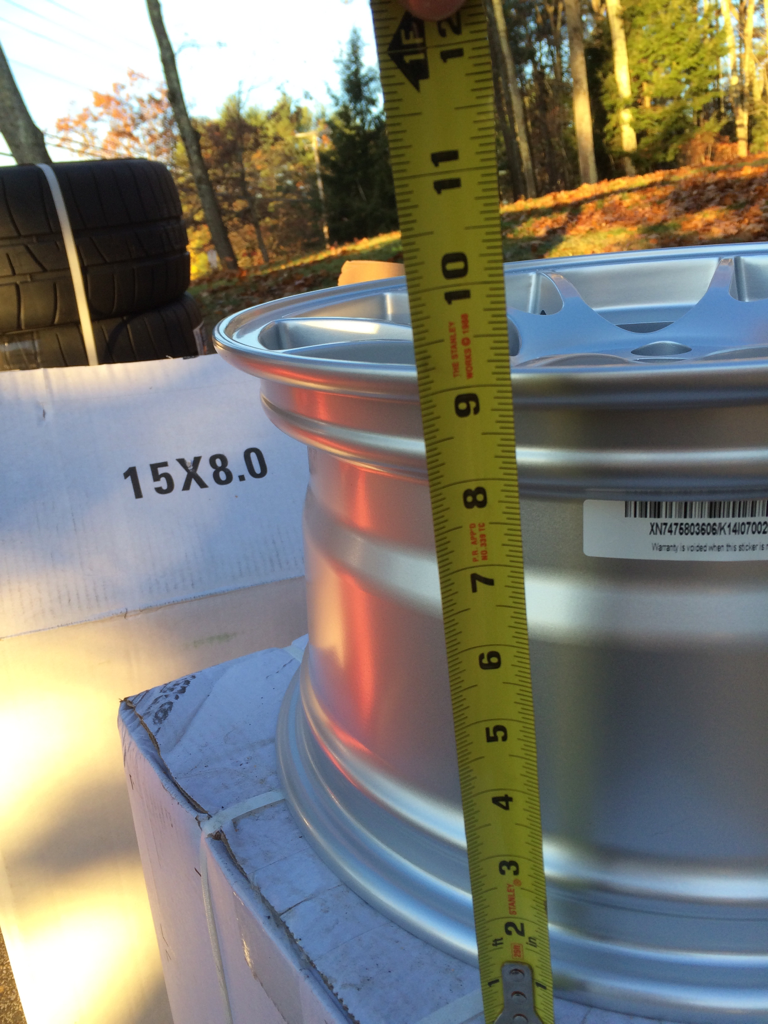 They fill out the fender wells a lot nicer, without rubbing anywhere. 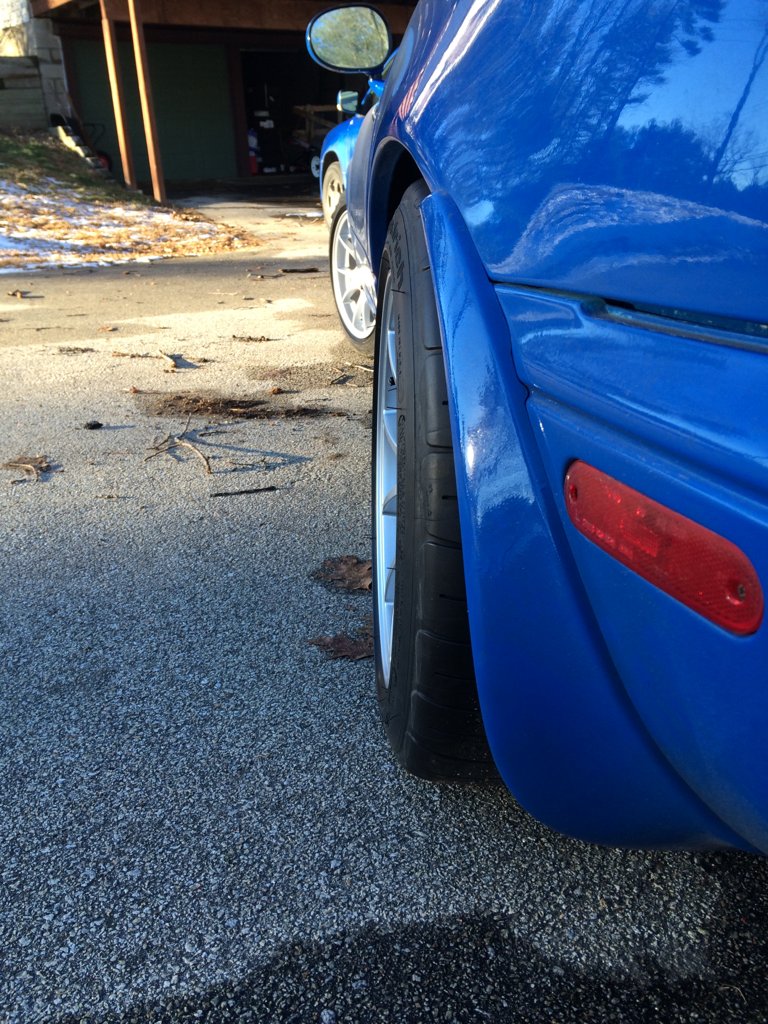 I'm pleased with how they look, too. Then I put the car away for the long winter's nap. Much more to do next year. 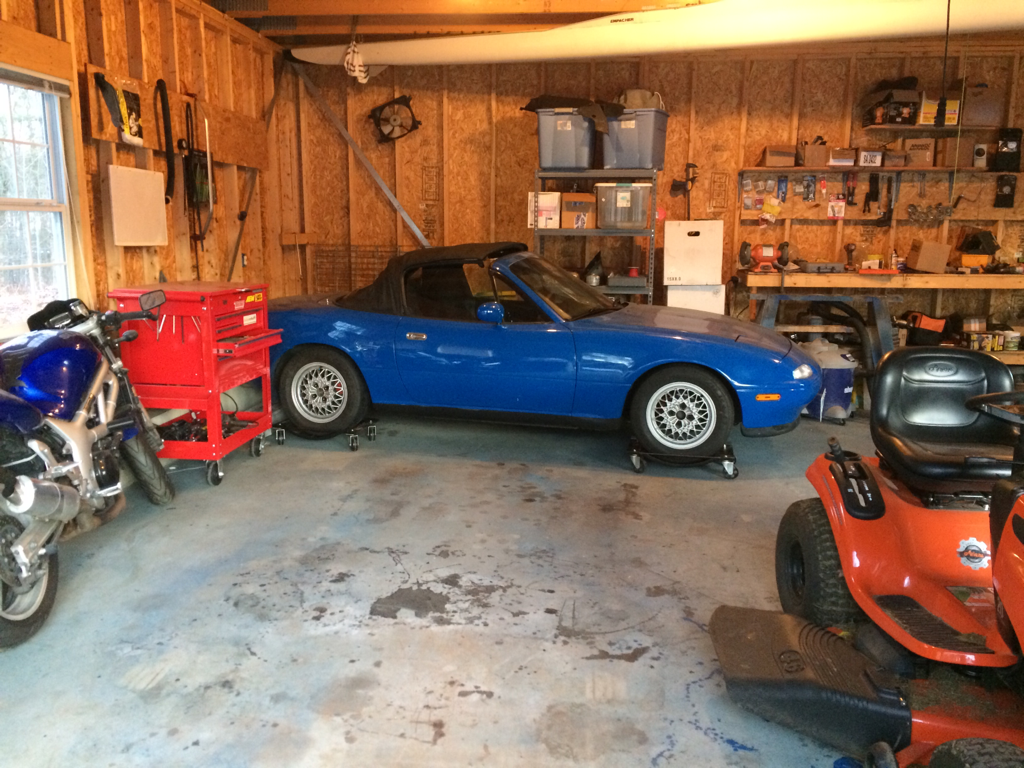