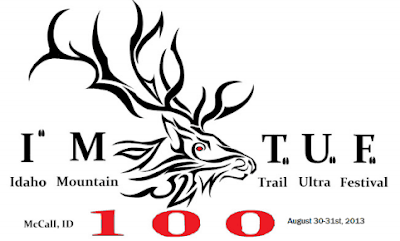 I kind of stumbled onto the IMTUF 100 by accident. As I was looking for a late summer mountain 100 miler, I discovered Jeremy Humphrey's 2012 Cascade Crest 100 race report at his website, Stay Vertical. Perusing through some of the other blog entries, I learned of IMTUF, and Jeremy's love and enthusiasm for his McCall, Idaho trails was clear. With a little correspondence I was sold and chose to race in Idaho in August over a handful of alternative races around the country. 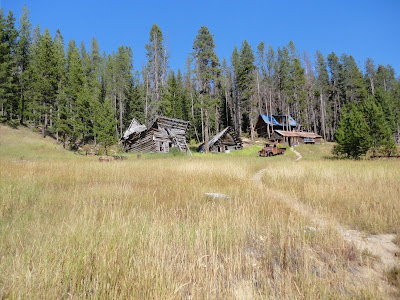 Despite being my focus race for the year, my preparation for IMTUF turned out to be anything but focused. My weekly training mileage through late winter and spring was sporadic and inconsistent as I tried to balance family, work, and other hobbies with running. A surprise entry slot into the Vermont 100 six weeks before IMTUF and then a punishing mountain run across the Mahoosucs two weeks out didn't really do my legs any favors and I began to fear I'd dug myself into a hole of fatigue. My taper was equally spastic, with lots of beer and only two runs in the final weeks before IMTUF. This is not a training plan you'll find in any book and probably bodes poorly for any future career prospects I might have as a coach. 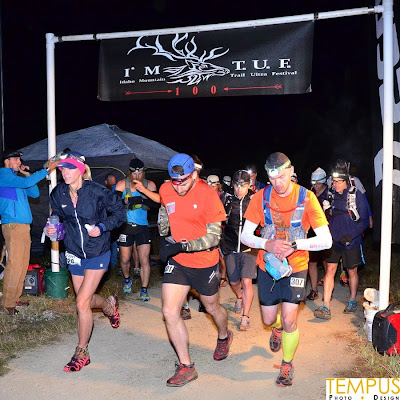 At the start, my confidence level was low and I warned my crew that there was a very real possibility my legs might give out under the abuse of the last two months, leaving me struggle to finish within the time limits. I told myself I was going to go out easy. No, seriously. For real this time. And the start did feel easy, but then again, it always does. Nobody else seemed interested in taking the lead on the dirt road that starts the race, and I found myself at the front from the very beginning. There were a handful of names on the entry list that I expected to share the early miles of the course with, but when we turned onto the Nethker Creek Trail to Bear Pete Mountain, I was soon alone.

I'd never lead a single step of a 100 mile race before, but it turned out that I'd lead every single one this time. When I rolled into the first major aid station at Upper Payette Lake around mile 15 my legs were feeling great. I was on top of the world after having run a series of gorgeous trails on an open ridgeline. So far the terrain had been a mix of flowing buff singletrack with a few intermittent moderately technical sections and a bit of forest road. If the rest of the course was anything like this, I might be able to challenge the course record. Jeremy Humphrey, one of the race directors, walked me out of the aid station and offered up some valuable beta on the course ahead, as well as advice to beware of patient, hungry runners behind me. 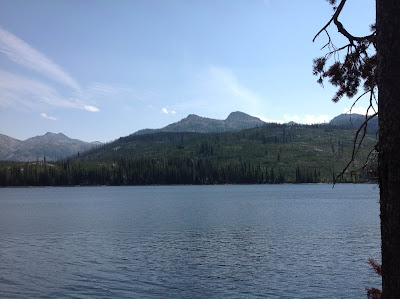 There are some advantages to leading, one of which is that you're more likely to encounter wildlife. Being from the East, I'd never heard an elk bugle before. It gave me a little thrill when one rang through the woods a bit before sunrise; a perfect way to start the day. Later on I'd encounter mule deer, a moose, and numerous grouse along the trail. Jogging up Pearl Creek Road to the Crestline Trail I also passed by a large flock of sheep grazing in the brush and tended by a pair of Peruvian shepherds. Crestline was spectacular, as advertised, with more open ridge running through meadows, over granite ledges, and by many old burn scars affording mountain views in all directions. Here the footing was a bit more technical, reminding me of Massanutten in many ways and my pace began to slow a bit in the heat of the day. I was frequently looking over my shoulder, but there were still no other runners to found.

There are also some disadvantages to running on the front. In my case, except for aid stations, I was alone for the entire race. No music, no pacer, and no one to talk to. I also had no idea how close second place was. There were intermittent reports that I'd established a substantial lead, but the information was hours old by the time it reached me and I often got conflicting reports. Was I gaining ground or losing it? Hours ahead or minutes? I had no real idea. Not that it made much difference. In any case I'd just keep pushing as best I could. 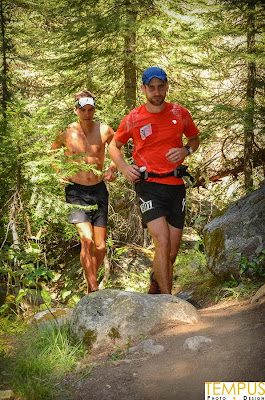 Jeremy escorted me again out of Lake Fork Trailhead (mile 44) while he checked the course markings at a few key junctions. He offered some valuable advice to take a dunk in Lake Fork Creek  when I reached it a couple miles down the trail. I waded into a pool and submerged my entire body, instantly feeling refreshed as I rinsed away nine hours worth of sweat, dust, and salt. This was renewal that would be needed for the very steep and rough climb over Snowslide Pass a few miles later. The sun began setting somewhere around Duck Lake Trailhead (mile 60) where my parents were waiting with clean socks, gel, and fresh bottles of Perpetuem, as well as my lights and warm clothing for the night. I usually get a bit of an attitude and energy boost in a race as things cool off around sundown and I was able to run most of trail returning to Upper Payette Lake (mile 70), only needing to turn on my headlamp for the last section into the aid station. I'd heard some distant howling through here, a couple miles above the road crossing. Wolves or coyotes, perhaps. 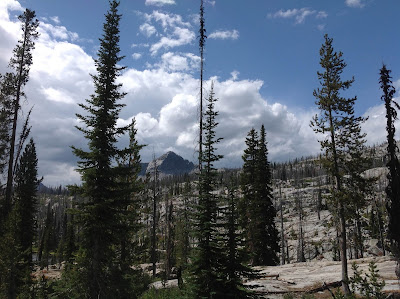 Upper Payette Lake was a bit of a low point for me. It was far enough into the race that the morning's enthusiasm had worn off, yet too far from the finish to feel the end drawing close. Thirty miles is a long way left to go. It'd been a few days since I'd seen my wife, infant daughter, and dog and missing them I felt gutted inside. My quads actually felt pretty good but my hip abductors in my outer thighs had tightened up severely, which limited my ability to run well. Additionally, my energy levels were fairly low and I found it difficult to run fast enough on flat ground to really elevate my heart rate. I've come to understand that low points like this are an integral part of hundreds, something that I fully expect to encounter. Overcoming them, just accepting that it's a roller coaster ride, and continuing on is crucial to being successful. All the rewards become apparent at the finish line and in the days following.

But the immediate reality was that I had an unjustifiably bad attitude and it took most of the steep, climbing plod up Victor Creek Trail to break out of my little pity party. I was feeling a bit better by the time the trail turned downhill and smoothed out some. When I saw mile 80 roll by on my GPS I grew happier and began counting own the remaining miles in my head. My folks met me one last time at Chinook Campground (mile 86) but there wasn't much I needed beyond some encouragement and a refill so I quickly headed out. The Loon Lake section of trail was another smooth and flowy section that I made fairly good time on, despite a few steep sections that I surely would have been able to run earlier in the day. Through here there were quite a few large toads hopping around and I had to be very careful not to step on any of them.

The last section from Willow Basket Junction (mile 92) is something of a blur for me. I remember looking at my watch and knowing that the course record of 21:06 had long since slipped away and that even a sub-24 hour finish was now in jeopardy. I struggled to get any kind of a rhythm and found it difficult to maintain focus. Everything was an excuse to stop or walk; gotta pee, gotta fix my shoes, I'm hot I need to take my jacket on, now I'm cold and I need to put it back on. And so forth. This is where a pacer can come in handy. Lucky for me I encountered a light coming my way, which turned out to be Jeremy out for a jog again (at 5 in the morning). He let me know that there were only 2.8 miles left and with his company I was able to run the remaining distance non-stop. The finish line knew I was coming and gave me a winner's welcome as I crossed the line in 23:52:58 for my first 100 mile win. It was a fitting way to complete my tenth 100 mile finish. 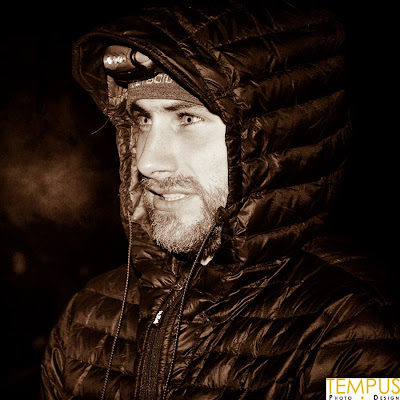 Maybe one of the best features of this race is the start/finish venue at Burgdorf Hot Springs, probably the most genuinely "rustic" places I've experienced. It was 100% unpretentious and I loved it. What better way to sooth fatigued muscles and sore feet than in a geothermally-fed  104 degree hot spring? Vermont 100's cold horse pond has got nothing on this. 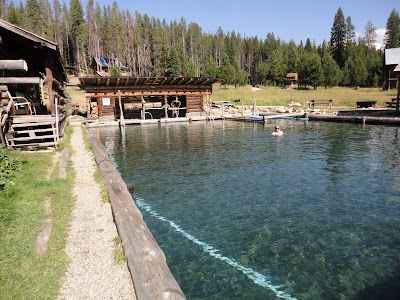 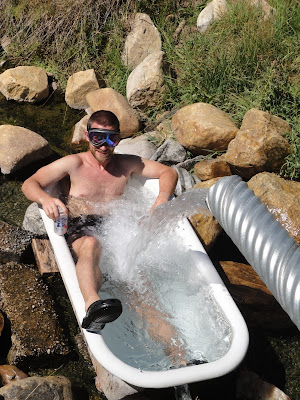 I have to say, I feel like IMTUF's best days are ahead. While it's currently a young, small race it has everything to offer the adventurous mountain ultrarunner. I'm thankful Jeremy Humphrey, Ben Blessing, and their volunteers put on a top-notch event in a gorgeous area of the country. The aid stations were well stocked, the route was clearly marked, and the course was challenging. I had several races to choose from in late summer and I left feeling that I'd made the right choice.