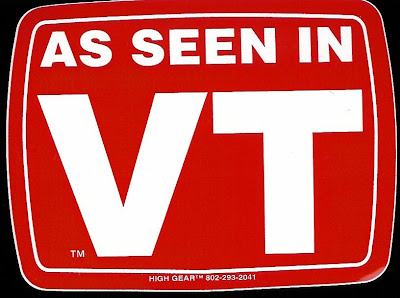 "Congratulations! A spot has opened for you to run in the 2013 VT 100 Endurance Race! Thank you for your patience during this process, we never imagined that we would fill up so quickly!!"

This was the beginning of an email that popped up on my phone three weeks before the Vermont 100 this year - not a lot of notice by anyone's standards. "Patience?" When I signed up in January and saw my name so far down the wait list, I promptly forgot about the whole thing for the next six months. My training lately would best be described as inconsistent, but I still jumped at the opportunity and immediately hit "reply".

Vermont 100 will always be a special race to me because it's where I ran my first hundred miler. I have many fond memories of crewing, pacing, and camping out here. The decision to come back was an easy one to make on the spot  for the usual reasons - to challenge myself, to enjoy 100 miles of Vermont scenery, to spend time with friends, and to relive old memories. But there was another reason; vengeance. 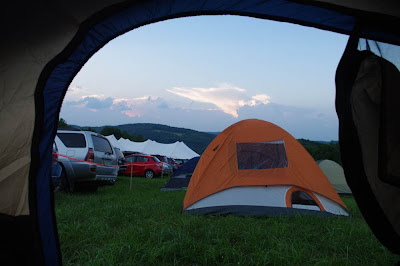 In 2010, with two hundreds under my belt, I thought I had it all figured out. Chasing a sub-twenty hour finish, I wrote a check my legs couldn't cash, and my quadriceps finally gave out around mile 92. Despite the best efforts of my pacer, it took over an hour to stagger the last mile to Polly's aid station at mile 95 where I dropped out. Dropping that far into a race will set you up for quite a bit of second guessing of every decision you made that day. While the feeling does fade over time, it still felt like unfinished business. 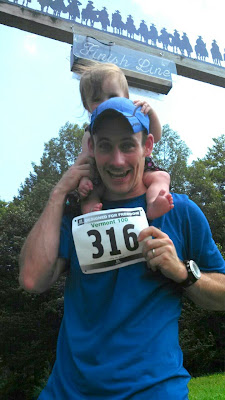 The night before this year's race brought a very intense thunderstorm with winds that threatened to rip the rain fly off my cheap tent (Ozark Trail's finest) and send my family scrambling for the car, but by morning the weather was warm and clear. Fireworks marked the 4 am start and off we went. Within the first couple miles I stubbed my toe on a rock and took a tumble in the dirt. Luckily I tucked and rolled into a somersault, getting off with only a scraped knee and a coating of mud. My starting pace was far too hard and that quickly became clear by the time I hit the marathon mark at 26.2 miles in 4 hours flat with my quads already starting to ache. There had been a long paved downhill on the way into the town of Woodstock that I'd let myself fly down with little restraint- my watch showing a high 6-minute pace for some of the mile splits. I really ought to know better by now. Maybe I could have gotten away with that had I been training hard since January, but things felt eerily like a repeat of 2010, so I backed off and slipped into damage-control mode. If my legs were going to last the rest of the race, I'd need to listen to them more closely. 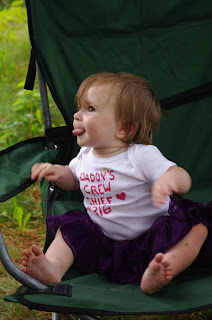 Stage Road at mile 31.4 came and went in 5 hours, where I stopped just long enough for my father to swap out my single water bottle, give my daughter a sweaty kiss, and chug an entire can of Mountain Dew (it was extreme). I spent the long muddy climb up the backside of the Suicide Six ski area sending rather impressive belches echoing through the woods. Along the way I got to spend a few minutes running and chatting with Amy Rusiecki and Todd Archambault before finding myself alone again. A course-side photographer passed along news that I was somehow in 11th place and I felt my ambition come swelling back, my pace creeping up a bit, before my quads reminded me that I still had a long way to go. Don't get carried away. Run your own race. 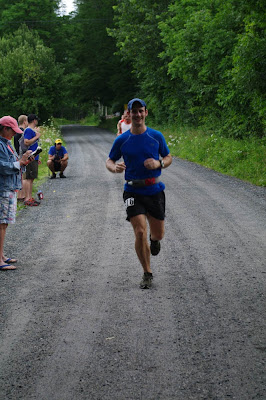 One unique feature of this event is that there's a horse race held on the same course, starting only an hour later than the runners. In previous years the first horses have caught me very early on, but it wasn't until mile 40 that I heard my first hooves. I happened to be bending over to tie my shoelaces when I heard galloping and "Now that's a runner's butt!" from the rider passing by. I told her she was running late. She told me I was running early.

Around 8 hours (right on my 2010 pace) I rolled into busy Camp Ten Bears at mile 47.6. After spending so much time alone, it was nice to see lots of familiar faces, if a little bewildering, as I tried to say my hellos, get weighed in, get resupplied, and get out. From here, the course does a 22.6 mile side loop before returning to Camp Ten Bears and entering the last 30 mile section to the finish. I have to say, this loop not my favorite part of the course. It has many steep hills that are hard to stitch together into a rhythm as the day begins to heat up. By now the morning enthusiasm has long since worn off, but it's sill much too far to feel the pull of finish line. Luckily I had some company as played leapfrog with Bob Ayers and Nick Pedatella for a while. 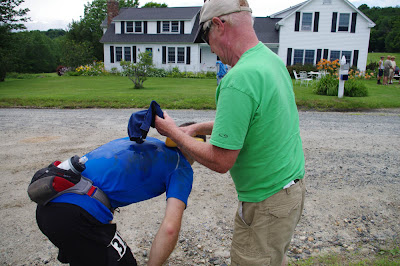 The long pounding descent back into Camp Ten Bears at mile 70.5 is an easy place to go too fast. I know because I've made that mistake before - but not this time. I arrived in roughly 12:30 elapsed time, feeling a bit haggard but holding it together, and picked up my good friend Ryan who'd pace me the rest of the way. He was eager to go, as all good pacers are, and we made good progress though the late afternoon and into the evening. 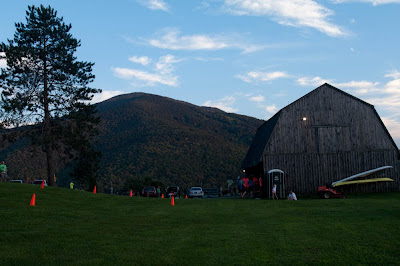 Reaching Bill's Barn (mile 89) before sundown, we were right where I wanted to be time-wise. This was also where my race really began to unravel last time. Now I was slowing as it got dark and could that feel my quadriceps were very vulnerable, but if I was careful I could eke out the last 11 miles on them at a reasonable pace. We formed up with a loose cluster of runners in 9th thru 13th place, with many position changes on the steep ups and downs that define the closing miles of the Vermont course. I wasn't really so much concerned with passing anyone else as I was with passing my old self. We ran by several familiar spots, places where I'd desperately tried to stretch and massage myself back to life before, and it felt good to leave them under our heels.

Last time I barely made it to Polly's, this time we barely stopped. I knew a good finish was all but in the bag and Ryan worked me hard for the last few miles. We passed my good friend Nate, who was looking rather deflated,  just out of the aid station and he told me to hurry up for a sub-nineteen hour finish. I thought it was too late but started to surge anyway. The best I could do were short spurts of running and walking. The final stretch of trail was uphill through the mud, within earshot of the finish. I saw lights gaining quickly behind me and a group of horses thundered by, which didn't do the soft trail any favors. Another light blew by out of nowhere, it was a resurrected Nate on a mission. He gave me a pat on the shoulder as I struggled and cursed the mud. A few minutes later the finish came into view and I crossed line in 18:56 for tenth place.


And with that, I'm satisfied. Despite not running the smartest race I could, I finished better than I had any right to expect given my training. I feel like I finally put 2010 to rest by achieving what I originally set out to do.