I don't normally like to publicly emphasize the lead up to races on my blog, usually just sticking to race reports after the fact, but I've had so much going on during my last week of preparation for Hardrock that I'd like to share. Since I got here, I've been dirt-bagging it alone around Colorado, running/hiking every day, eating off my Jetboil Sumo, sleeping in the car or on the ground, and bathing almost entirely with baby wipes.

I'm also looking for a way to express how excited and fortunate I feel to be running this race. So much gets said about the community and the race course and the town of Silverton that I thought there was no way it could live up to my expectations. Let me just say that I was wrong. I've been totally blown away by almost everything out here. This is in fact the real deal and I doubt I'll ever look at ultras the same way again.

So, without a whole lot of further blabbering, here's what I did (so far) on my summer vacation!

Never having had any kind of altitude problems before, I made the ill-advised decision to run up Greys and Torreys Peaks (over 14,000 feet) within 24 hours of arriving in Denver. After anointing the summit of Torreys with the contents of my stomach a half dozen times, I got the point. It was still a very cool place to be. 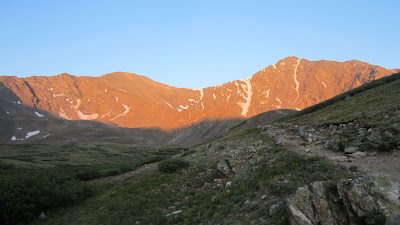 For the rest of the day I felt drowzy and lethargic, so I made my over to Rocky Mountain National Park where I set up my tent and slept for a solid twelve hours. By the time I woke up in the morning I was feeling much, much better, so I set off on the Keyhole route on Longs Peak. On the way up I ran into a really pissed off ptarmigan. You might call it... an angry bird. 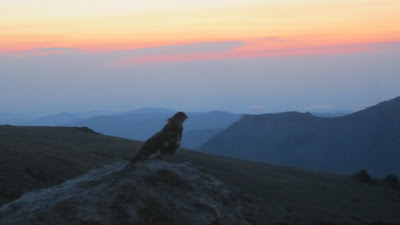 The sun came up over the boulder field. 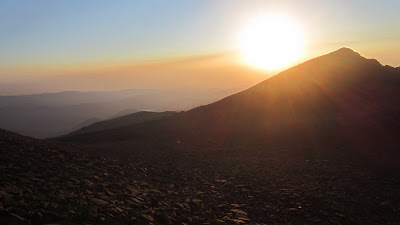 I traversed around the backside of Longs up the third class scrambling of the Trough, the Narrows and the Homestretch. Given that there's a thousand feet of exposure, I'm surprised that this route is so incredibly popular. 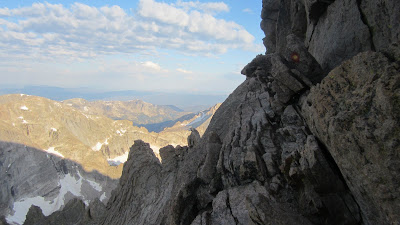 The summit is broad and flat and made for a good place to take in the view for an hour before things got too busy. 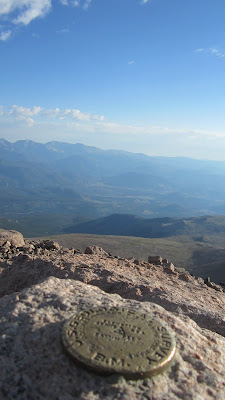 My half day of sleep must have done a lot of good because I had absolutely no altitude related issues. The headache, dizziness, and nausea that were such torment the day before, had totally disappeared. It's a good thing too, because I wanted to creep close to the edge of the summit cliffs to peak down towards Chasm Lake. I didn't get too close though, after over a year off climbing my fear of heights has made an unwelcome return. 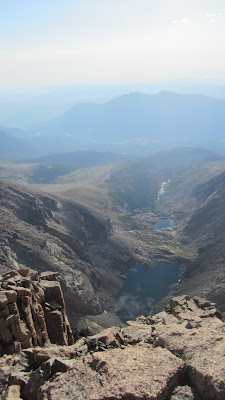 A couple friendly gentlemen from Malibu signed into the summit register just behind me. They must have copied my handwriting. 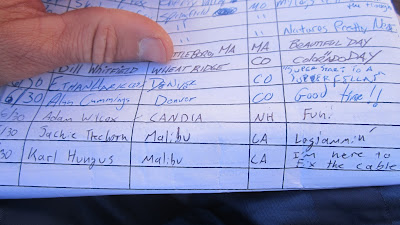 Saying goodbye the Diamond over the Boulderfield on my way down. 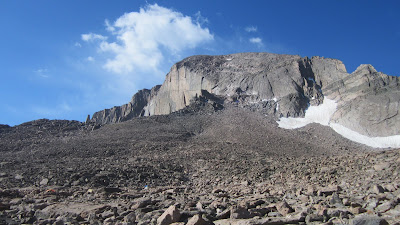 The next day I decided to check out the Maroon Bells Four Passes Loop outside Aspen. Usually done as a four day backpack, it's become reasonably popular as a day hike for trail runners. At 28 miles and 7500 feet of gain it seemed pretty similar to the Pemi Loop by the numbers. After getting a little mixed up on some tourist paths before it was light out, I was finally on my way and was treated to some beautiful alpenglow on the Maroon Bells. 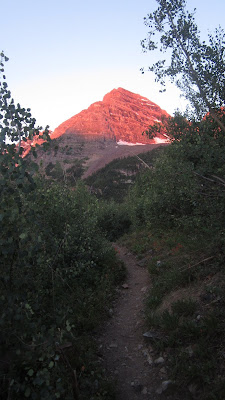 Looking back from Trail Rider Pass (#1). 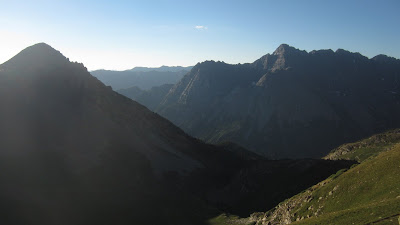 Wildflowers above Snowmass Lake on the way to number 2, Bucksin Pass. 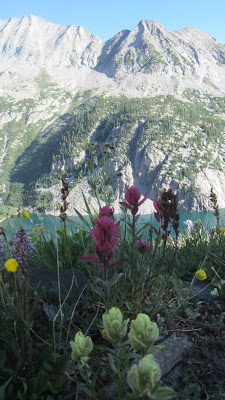 Fravert Basin was possibly the greenest place I've ever been and had endless smooth single track. Serious Sound of Music scenery over Frigid Air Pass (#3). 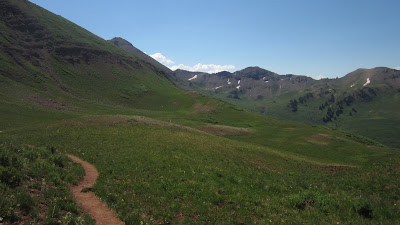 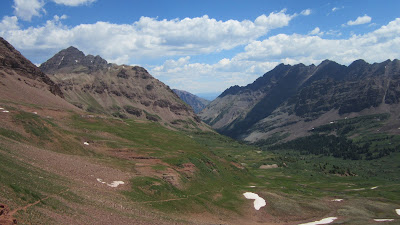 It took me just under 8 hours to complete the loop at a casual gawk-and-stare nap-in-the-wildflowers pace, probably the equivalent of a 10 hour effort on the Pemi Loop.  If you're capable of doing the Pemi and are looking for something similar in the West, google the details and book your flight. Right now. Don't wait. It's that good.


Next up, I made my way into Silverton for some course marking and recce. I paid special attention to learning where the course goes over Handies Peak and Pole Creek, where I plan to be passing through in the dark. 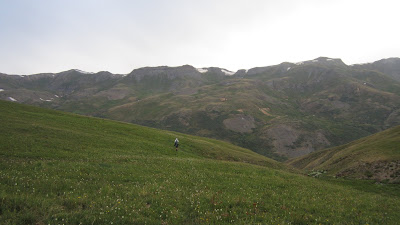 Lovin' life after power hiking Handies Peak (I'm not hip enough to shorten it to "pow-hiking"). 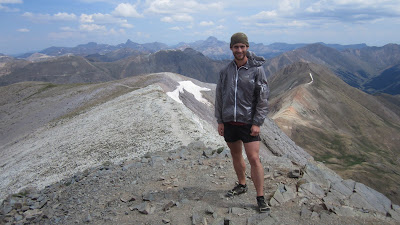 Handies Peak pika peeking out of the rocks. 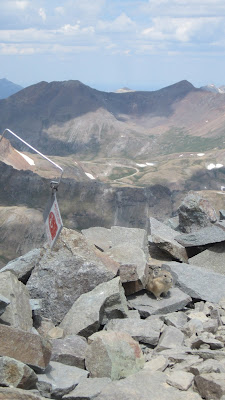 Half the fun was just exploring different scenic spots on the course that I might not otherwise get the chance take pictures of. Like Green Mountain... 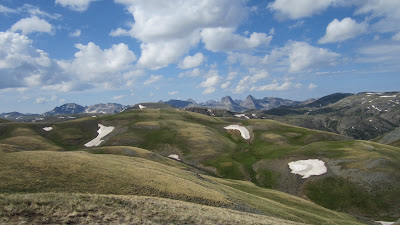 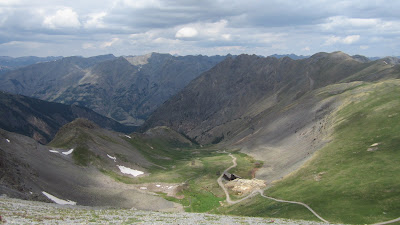 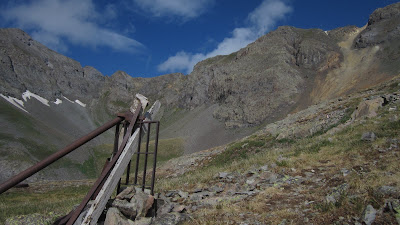 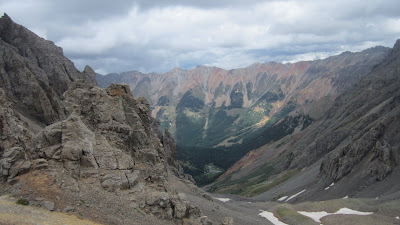 ...and Island Lake. This was the picture that really grabbed my attention for Hardrock in the first place and was pretty cool to sit down for a few minutes and enjoy the real thing. 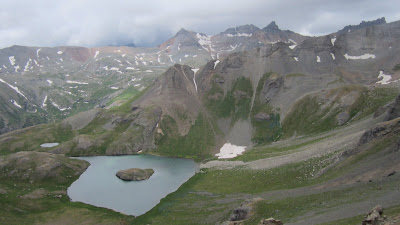 I kept hearing about how marmots tend to cause damage to unattended cars in the high country but I wasn't expecting to return to this. Enterprise is going to be so pissed! 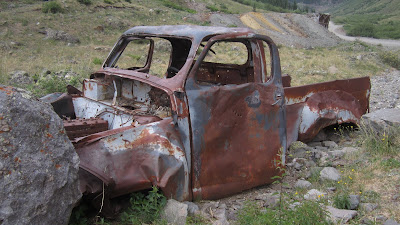 So, with a week left to taper and do more restful things with my better half, I'm feeling really good about the race. I feel like my training in the Whites has prepared me well and I seem to be acclimating to the altitude nicely. Based on my comparing my times to others, I'm prepared to publicly state a handful of goals that I think are reasonable if all goes well. I don't normally do this, but what the hell?


Above all, I'm grateful for the opportunity to come out here and be a part of all this. I feel like Hardrock is the culmination of all my efforts over the last seven years since I struggled to run my first mile on the road in a pair of cargo shorts and worn out hiking boots.