In the interest of being a little bit more versatile as runner, I took it upon myself to run a road marathon last year. I figured that for someone who's run 100 trail miles in a single day, a respectable time on 26.2 miles of road should be no sweat. Somewhere around mile 18, when I found myself bent over a guard rail and retching rather vocally, it dawned on me that I might have gone out a little too hard. It might have been a good idea to eat something as well, because running a 7 minute/mile pace for 3 hours will make your energy reserves run dry a lot faster than 3 hours at a 12 minute/mile pace will. After staggering to the finish in 3 hours and 45 minutes, a drooling mess, I knew I had a score to settle.

Road races, as opposed to trail, are supposed to for a needier sort of runner - the kind of person who wears a heart rate monitor and compression socks and jogs in place at traffic lights, or so I thought. Yet, somehow a mere marathon got the best of me. To salvage some of my honor, I promptly signed up for a second marathon held 7 days later and ran the exact same time, within 30 seconds. Despite pulling this off with only a week of recovery time, I still didn't feel quite right...

Fast forward to Halloween of this year and I'm waiting to start the Cape Cod Marathon, the same race I crashed and burned at last year. Coming off a strong Vermont 50 finish as well as a month of fast road training, I felt pretty good about my chances of laying down a fast time. My goal was to qualify for the Boston Marathon which is not an easy task. A male runner under 35 years old needs to do better than 3:10:59. While this is a fairly lofty standard, I've heard you need to be in the top 8% or so, I think it's still a fair and obtainable minimum. It just takes work.

As with most road races, I felt a little out of place. This time I was at least wearing road-shoes, even if they were McDonald's colored. Everyone else looked fresh and neatly groomed - I'm growing out my hair and was sporting a healthy case of bed-head. No stretching or warming up for me. Soon enough the cannon was fired and we were on our way. 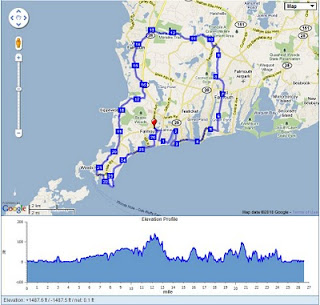 I'll spare the blow by blow of this race but, suffice to say, I ran a solid race from start to finish. The halfway mark went by in 1:29 and I began reeling in many of the people who had passed me early on. Much of the race I was completely alone. At one point I couldn't see anyone ahead of or behind me and experienced a brief moment of panic when I though I might have spaced out and lost the course. The last few miles were tough, as they tend to be, but I held off a few challengers in the homestretch to finish in 3:06:18. With a 7:07 minute/mile average pace, I was quite pleased. 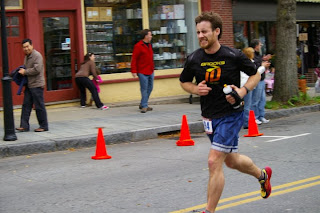 While I now feel good about my marathon time, each race always leads to another, and I'm wondering if breaking 3 hours is in the cards for me. Perhaps with a more training and a flatter course I could pull it off, but that will have to wait until next near.
Posted by Adam Wilcox at 8:35 PM