Last weekend further solidified the Vermont 50 as my favorite race. The course is challenging yet fast, and it has miles of my favorite kind of trail; twisty mountain bike single track. The location is excellent, with gorgeous scenery and the late September date makes for beautiful foliage and ideal running temperatures.

I wore a GPS this time around, to get a good map and elevation profile of the course. I think some of the tightly winding sections of trail under tree-cover may have confused it a bit, as I came up about 1.5 miles short by the time I hit the finish. I trust Course Director Zeke Zucker's measurements more than my own, however. 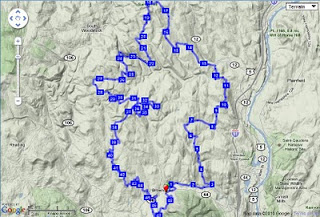 Going into the race, I felt like it was time to redeem some past failures - Failure to start the race last year, a DNF at mile 95 of this year's Vermont 100, and a pacing performance at Leadville that I can't say I'm proud of. I have last year's VT50 race shirt, as well as this year's VT100 race shirt sitting in my drawer at home and I don't feel comfortable enough to wear either one. If there was ever a time to lay down a solid performance, this was it. With plenty of time to recover, a solid 2 month block of training, and no injuries, I was feeling as strong as I ever have.

I took a spot near the front of the line for the start and quickly found myself on the heels of the lead pack. With 5 miles or so of easy road to start the race, I knew I could bank some significant time. The risk of going out too fast seemed low, as I've been running fast 5 milers at lunch during the work week and I've gotten to the point where they take very little energy out of me. I did have to let my experience and better judgment take over once we began to hit the hills and focus on my own pace as other people passed me frequently. Still, I ran all but the steepest of hills throughout the race. While it was tempting to try to keep up with others, especially new friends I was enjoying conversation with, I had to let them go.

There were a few notable spots along the way that helped me keep my motivation up. The first of these was a small section of trail that's shared with some of the later miles of the Vermont 100. There's one particular section where the trail goes by a small pond, past a gate, and along a woods road. It was here, a few months ago that I was reduced to a hobbling, blubbering mess just before dropping from the Vermont 100. I felt a hell of a lot better this time and revisiting the same spot only made me more determined to make up for that failure.

The second spot was in a particularly winding section of trail that goes through a house's back yard. Right out by the trail was cooler, with a sign saying "for runners only" that contained glorious beer. At first glance, there were only a few cans of Bud Lite remaining, but my eyes caught a glimpse of a familiar bottle cap sticking out from the ice; Long Trail Blackbeary Wheat, my favorite. I downed half the bottle in a matter seconds and thought about taking the whole thing with me, but decided to leave the rest for someone else. With so little beer left, only runners who hustle would get one today.

For this race I opted to go much lighter than usual and to try some fine tuning of my nutrition strategy. Instead of a waist-pack, I carried only a single water bottle in my hand and I wore a pair of hand-me-down basketball shorts with large pockets that allowed me to carry 8 gels at a time. This provided a noticeable freedom over the larger loads I've carried in the past. Having suffered from persistent blood-sugar problems in other races, I decided to up my gel intake. It used to be 1 Gu every 60 minutes, then 45 minutes, and with this race, every 30. While my teeth felt disgusting, I never bonked and my energy level was consistently high from start to finish. At aid stations, I only took water, filling up my bottle as quickly as possible. This time around I didn't browse the food table at all, I was in too much of a hurry. At handler stations, Miriam and I performed a fast bottle and gel exchange with less than 30 seconds wasted.

Stopping for aid makes me so ANGRY! I'm not sure what prompted this facial expression. 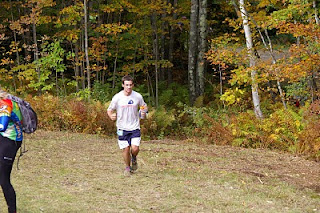 For footwear I wore my trusty Brooks Cascadias, though I may have kept them laced a little too loosely as I suffered from toe-bang throughout the race. I didn't get any blisters, but two of my toenails are turning black. Other than that, they performed superbly whether we were running steep downhill trail, or pounding out stretches of dirt road. As much as the whole minimalism trend is fashionable among running shoes, and I agree with much of the thinking behind it, my relatively heavy Cascadias continue to get me through races.

With only 5 miles to go, I found myself in a very strong position, and I began to see that an 8 hour finish was within reach. Many of the people who had looked so fresh when they passed me early on were now looking a little worse for wear. I smelled blood in the water and kicked it up a notch, picking them off one by one. I left them a few words of encouragement, but then did my best to leave them behind.

The last few miles were tough. Despite my best efforts, I had to walk some of the final hills, all while watching my watch tick closer to the 8 hour mark. Just as it was looking like I might not make it, the course made its final downhill turn and I was able to blast to the finish as fast as my legs would carry me. 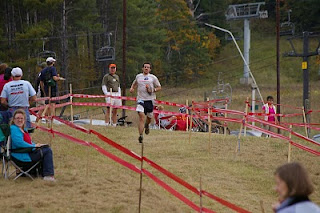 Final time: 7:56:35, a new personal best for the 50 mile distance by over a half hour, as well as a new PR on the the VT50 course by over 90 minutes. This works out to an average pace of 9:31 minutes per mile. Thinking back, had I used a more leisurely aid station strategy I might not have gotten a time starting with a 7. Also, as an unexpected bonus, I somehow managed to win the men's 20-29 age group. Looking at the results, I pulled this off only by passing a handful of other people my age in the last few miles. For my trouble I was awarded a plaque and a jar of honey, the first prizes I've ever truly won.

While there was no mud, the course was very dusty. My stolen, I mean borrowed, gaiters worked wonderfully for keeping my feet clean. 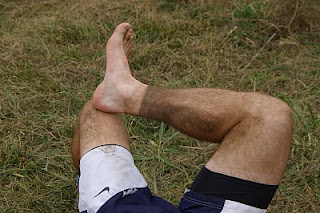 At this point I'd like to think that I've fully redeemed my most recent shortcomings. With recovery going well, I'm psyched up and trying to decided what to do next.

Tired but happy family showed up just in time to see me finish. 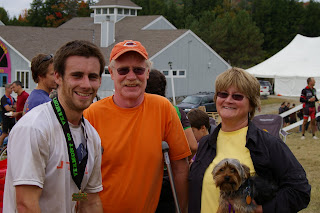