It's no secret that someday I want to climb a big wall - El Capitan in Yosemite Valley, to be specific. After toying with the idea for a few years and pulling inspiration from a variety of sources, I finally managed to wrap my mind around the idea that this could really happen. So, last year I began to practice the skills that I'll need to claw my way up over a vertical half-mile of stone. After making a fool of myself in the gym in a tangle of ropes and miscellaneous mechanical trinkets, I finally began to pull together some semblence of competency. Enough to convince my friend, Lee, to do a few practice aid climbs with me over the summer.

The next step forward was to make things a little harder, so I settled on aid-soloing the Prow on Cathedral Ledge as a logical improvement. This 400 foot climb takes a fairly direct line up a prominent buttress on the highest part of the cliff. It tops out directly below the railing of the tourist overlook.

Though Lee and I climbed up the Prow together back in July, taking the climb on solo would demand an extra dimension of competency and self-sufficiency from me, plus almost tripling the amount of physical labor required. When rope-soloing, the climber passes over each inch of the route three times; once when leading up the pitch, once when rappeling back down, and a third time when ascending the rope and collecting all the gear left in place from the first trip up. This is repeated in increments of roughly 100 feet until the climber reaches the top.

I arrived at the cliff early in the morning, just after first light, and made the five minute approach to the base. Along the way I found an interesting artifact that had apparently made the long trip down from the top. You stay classy, North Conway. 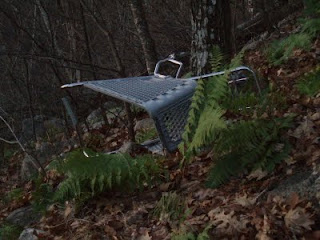 Looking up at the route. The top looks so close, yet so far. 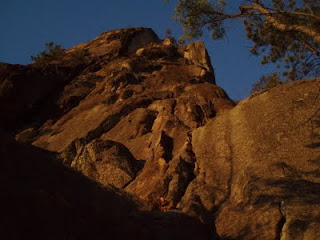 I carried roughly 40 pounds of equipment with me, including 2 ropes, an assortment of cams, nuts, carabiners and hardware, a backpack, some water, and a few other items. I used everything at least once. 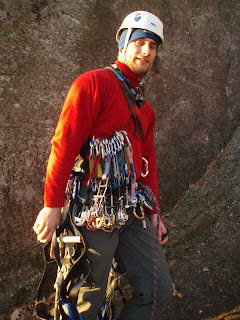 Though a bit wet in places, I made short work of the 5.7 first pitch. Being an aid climb, I didn't feel bound by normal rules of free-climbing style, and I liberally used my gear as artificial handholds to speed my progress. After reaching the bolted belay anchor, I fixed both my ropes and rappelled back to the ground. After exchanging goodbyes with my wife, I began to ascend my lead line and collect my gear.

Getting above the tree tops: 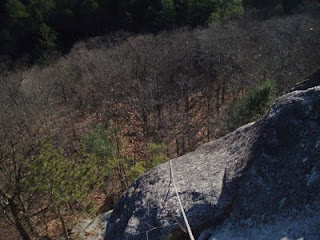 I took a moment to reorganize my things, drink, and switch over to self-belay mode before starting the second pitch. This one starts off with a somewhat awkward free-move onto a ledge at about chest height. From here, you can reach up, clip a bolt, and revert to aid climbing. After moving up past a few more bolts, I made slightly tricky nut placement, and then up a crack with an occasional piton in it. Passing another bolted anchor, which I skipped, I made long reach around the very edge of the Prow itself before I could pull myself onto a narrow, slimy, wet foot ledge. The first time I went up this route, I was terrified at this spot. This day, I felt casual and in control. A few moves on pitons led to two loose looking flakes, which I climbed by lassoing them with slings so as to avoid any outward force which might rip them off the wall. A narrow crack led back over the crest of the Prow and I was soon at the next belay anchor.

By this time, some free-climbers who were moving much faster had caught up to me and I was courteous and let them pass. While I rapped on my second rope, they climbed the pitch I had just led, being careful to work around my gear. Since the previous pitch had traversed a bit, rappelling directly downward left me well off to the side of my lower anchor. To get back to it I had to do a pendulum traverse where I swung myself back and forth along the wall until I built up enough momentum to reach my previous anchor. On my way back up, I had to wait a little bit for the other party to finish up, so I stopped to chat with one of them and take a few pictures. 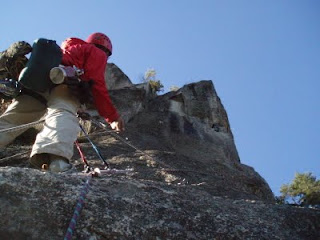 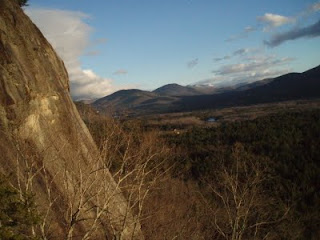 My shadowed silhouette sticking out from the edge of the Prow's shadow: 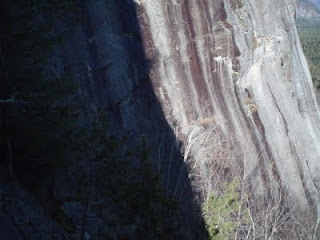 Soon, I was on my way and starting the third pitch. After leaving the belay anchor, I made an easy move onto a bolt, then saw the next one was nearly 6 feet higher, an absurdly long distance to reach. Fortunately, I was expecting this and had a plan. I clipped my harness directly to the lower bolt with a quickdraw, left both aid ladders on the lower bolt, and detached one of my daisy chains from its ladder. I stepped wayyyyyy up in my aider to the very top step, not normally used. This put the previous bolt roughly at my shins, while the quickdraw pulled down on my harness, so I could use the tension to stay fairly stable and balanced. I reach way up, stretched, and was just able to clip the bolt with my free daisy chain. Easy as pie.

From here, a shallow wet corner led up, then dead-ended, where I made a bit of a reach to the left and into the next crack. This led up into the corner below the famous triangular roof. Here, the gear placements got a little more tenuous. A few nuts, a brass-offset, and awkward movements in the corner got my to more solid gear in the roof. I breathed a sigh of relief. 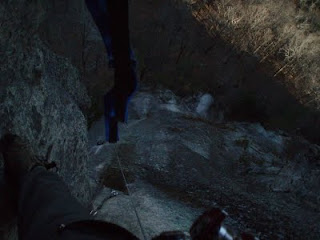 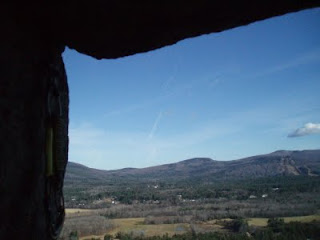 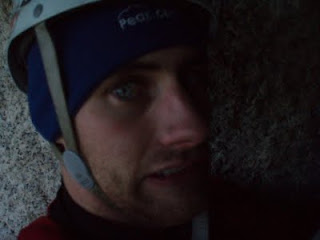 By this time, Miriam had returned and was taking pictures from the ground. I had also attracted something of an audience; I could see a small throng of people gawking up at me, alone, in the middle of the cliff. 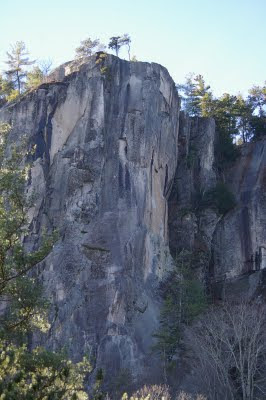 Mir also walked up to the base and took some shots looking up: 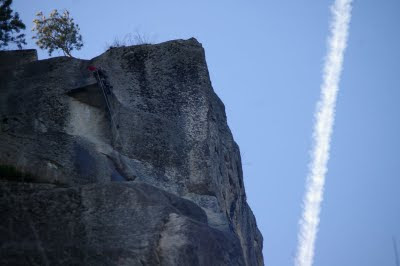 After awkwardly surmounting the lip of the roof, I had to build a gear anchor. This creeped me out a little bit, as I had to creatively make a solid anchor with the few remaining pieces of gear I had left that would fit. With a little imagination and an excessive amount of time, I was able to make something adequate. Rapping back down over the roof left me hanging and spinning in mid air for a few feet, a little thrilling, to say the least. Jugging back up was a bit awkward when I got to the roof as I had to unweight the rope from each piece of gear before removing it. My ascending method of using a single mechanical ascender and a Gri-Gri came in handy here. I struggled up to the anchor, reorganized everything, drank the last of my water, and cast off on the last pitch.

This pitch is supposed to be pretty easy for aid climbing, but I found that it took some thought. I had left many of my most desirable pieces of gear back in the anchor, so I had to make do with what I had. Being stingy with what I left behind, there were times when my potential fall distance was a bit more than I would have liked. One cam that shifted abruptly when I weighted it brought this concern into sharp focus. Luckily, I was soon on to better gear and making rapid progress toward the top. 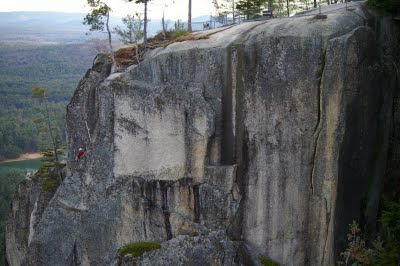 The tree at the top grew closer and closer until I was finally able to grab it in a bear hug and heave myself on flat ground like a beached whale. 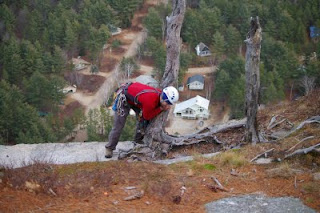 But I was not done yet, I still had to rap back down one more time to retrieve my gear. In the mean time, I had a more urgent priority and ran off into the woods to relieve myself. No peeing in a bottle today.

I borrowed a headlamp from my wife as it was getting dark and mine was 100 feet below in the bottom of my pack. The cleaning went fairly quickly, as did the climb back up. By now I felt like a well oiled machine. I finally topped out just as it got dark and gathered all my things. 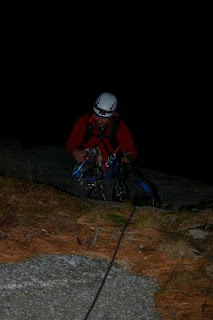 My knuckles were a little worse for wear. A week later they look worse than they did 5 minutes after I finished. 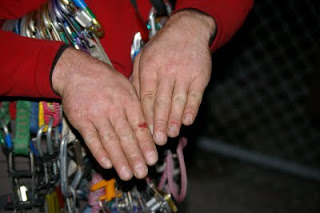 A bright moon led us down the auto road without the need for headlamps and, for a short while, all was right with the world. One step closer to a big wall.
Posted by Adam Wilcox at 6:21 PM