What if I told you that there's an ultra as enjoyable as any I've ever run but, unless you're from a particular corner of the world, you've probably never heard of it? This race accumulates 15,000 feet of elevation gain over 100 kilometers through a variety of surfaces from steep, rocky talus hopping to rooty, technical trails and some fast, flowy sections. You'll go through mossy spruce forests and open glacial valleys, across snowfields, and several miles of treeless alpine moon-scape with views of the sea off in the distance. This race is not in California, it is not in the Rockies, and it is not in New Hampshire. This race is not even in America, but neither is it across an ocean (from my home), either. I'm writing about the Ultra Trail du Mont Albert in the Chic-Choc range of the Gaspesie peninsula in Quebec, and it was the centerpiece of the best trip I've taken in a long time. Yet I almost didn't didn't make it there.


I've known about UTMA for a couple years, but only vaguely. The race website could use a better map and more pictures and my french language skills are poor enough that I didn't find a whole lot of race reports to fill in the gaps. Instead I chose to run Manitou's Revenge in 2014 and Western States in 2015 before UTMA became my main race for summer 2016. Helping seal the deal was an unusually favorable exchange rate this year.With a twelve hour drive from home, my wife and I decided to make a family vacation out of the trip, camping with our kids along the way.  All was set to go...until I couldn't find my passport at the last minute. We considered alternate plans, but in the end committed to the trip thinking we'd enjoy ourselves in Canada and then beg for mercy to cross back into the United States on the way home.


Quebec feels like my own little secret parallel universe in many ways. Within a few hours I can drive my family across the border and almost convince myself that we're in Europe. I love the food, the language and all the curious little idiosyncrasies that make it different. Plus, nearly all my maternal ancestors are French-Canadian and visiting la belle province is a good way to show my kids that French isn't just an odd habit of their grandmother. All along the trip we enjoyed excellent, uncrowded camping and genuinely friendly, welcoming people.

At the race start, I felt no anxiety. Despite the loud music, announcer, and unsustainably fast opening pace, there was little pressure to keep up. No one knew me and I was free from expectations. I accepted that either these people were that much faster, or that I'd see them again by the end of the day.  We worked our way up Mont Albert on a rocky, eroded climb that felt like a blend of the New Hampshire and Colorado, breaking out into a glacial cirque with cliffs and snowy gullies overhead. I began passing people one by one here, not really on purpose but because I'd slipped into the same familiar all-day pace I'd use in White Mountains. Pushing upward through a ravine there was a large, steep snowfield on the ravine headwall with a fixed rope, then maybe a mile of alpine running on the treeless windswept Mont Albert table land. 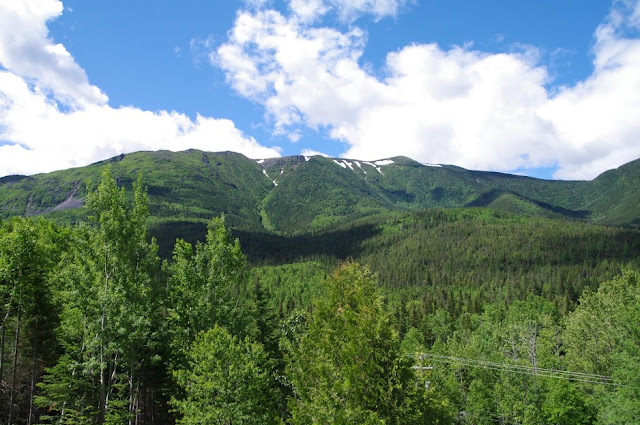 A short descent across more snow dropped me back into the treeline where the trail was uneroded and soft underfoot. It reminded me of lesser-visited sections of Kilkenny Ridge, a good mix of fast running and more techy rocky-rooty stuff. Occasionally small open peaks would provide an outlook back to Albert and off to the Gulf of Saint Lawrence. By the second aid station at Lac Cascepedia I'd moved into fourth place. Climbing out of Cascapedia, an abrupt viewpoint at the top of an overhanging cliff materialized unexpectedly between the trees and I had to stop for a moment to take it in the view of windmills and small villages cut out of the forest in the distance. 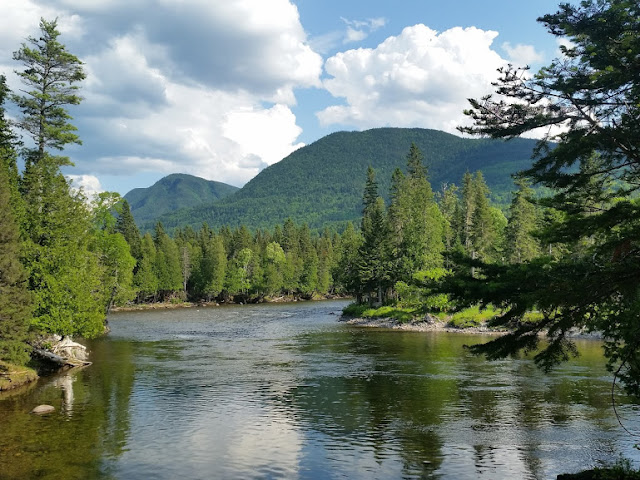 Lac Thibault was our turn around point and an efficient aid station transition allowed me to move into second place, with the leader in sight on a forest road ahead of me. I was able to catch him without overexerting myself and spent a few minutes chatting with Florent from Quebec City. While I was able to free myself from any competitive aspirations at the beginning, the possibility of a win was too tempting to ignore. I'd gotten myself to this point in good condition and knew that now was the time to make a move, so I upped my effort level a bit and tried to focus on running strong all the way to the end. This worked well for a while until another runner I didn't recognize came up on me very quickly. He tried to tell me that he was in the relay race but I misunderstood and mistook him for the solo division. I should have been clued in by his very heavy breathing that he hadn't run 60K already, nor was he expecting to keep up this speed for another 40K. But still I tried to fight him for the "lead". I had an advantage on the downhills, but he'd put some distance on me hiking the ups. On the flats, when I tried to run his pace, my muscles would begin spasming and cramping up, and I had no choice but to watch him disappear ahead of me. There was a sinking feeling that I might have just blown my chance, but I resolved to keep pushing just in case he'd overextended himself and I might catch him later on. Little did I know that this push is probably what kept me ahead of my real pursuers. 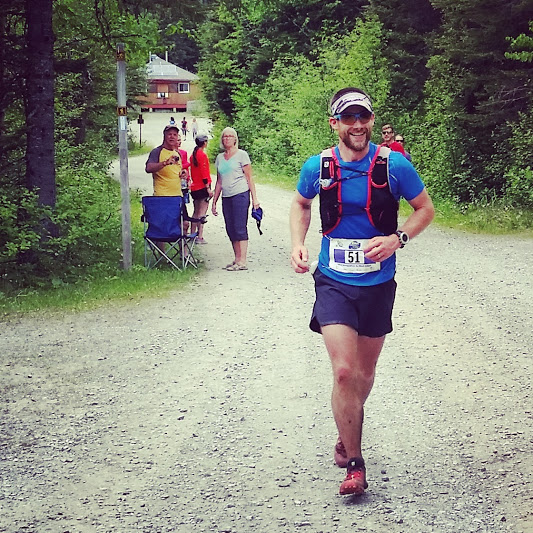 It wasn't until back at into Lac Cascapedia that I realized I was still leading. Though I was feeling rather crummy and dehydrated, it was good to see that Miriam and the kids had come out to see me. My racing experience allowed me to get what I needed from the aid station and back on the trail as soon as possible. Again, this might have been a crucial advantage. Still, the few miles of pushing had been costly and my legs muscles weren't cooperating. I had to walk a lot of the runnable terrain that I'd made good time of on the outbound leg.

Topping back out on the Mont Albert plateau was a relief and buoyed my spirits. The alpine breeze helped cool and dry my sweaty clothes while I kept my eyes peeled for caribou in the distance. The trail here is a little odd in that to reach the north summit of Albert you need to descend the snowy ravine from the beginning of the race, then climb back up a second nearby ravine to regain the table-land. It's a detour of a few miles and a few thousand feet of climbing, but nearly level and only a short distance as the crow flies.

The last climb reminded me of Tuckerman Ravine, a bony scramble with a waterfall pouring down the cliffs nearby. I stole a quick glance back, and saw another runner perhaps 400 meters back, recognizing him as Jean-Francois Cauchon, last year's winner. Oh shit! Don't blow this with only a few miles to go. While I was scared, I was also grateful he was there. I'd rather be chased for a win, than take it easily. Fear can make you dig deeper and, more than any competitive result, I wanted to finish with nothing left. I tried to climb harder but my hamstrings and groin seemed to vibrate like guitar strings, threatening to set off a severe cramping episode and immobilize me for a few minutes. The best I could do was focus on being as smooth as possible and picking the most efficient line through the rocks. I crested the climb, chugged some water from the last aid station, and began to hammer the descent, hearing cheers behind me only a few minutes later. I was sure he was right on my tail but I wasn't sure my blown quads could take the aggressive pounding of the 3000 foot descent to the end. Still, I found it easier to not fight gravity by braking so I just committed to basically falling down the mountain, doing my best to remain upright. While technical downhills are my strength, I was jumpy and sure I'd be caught at any moment. Every sound in the woods behind, real or imagined, spurred me to run harder. Smooth, deliberate breathing kept my side from stitching up. Adrenaline must have anti-cramping properties because I calmed down a little when I crossed the the road leading to the finish. I could see I was alone and then almost immediately relapsed into muscle spasms in the last 100 meters. Cheers from the finish brought the adrenaline back and I was hold it together to the end. 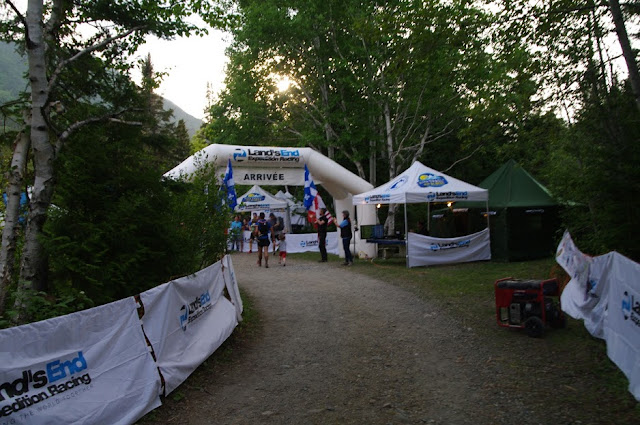 There were cheers, congratulations, handshakes and hugs. I managed to win with and a new course record of 14:08:49. Jean-Francois arrived 10 minutes later and Florent 20 minutes after that - a fairly competitive race given that all three of us finished under the old course record with a much closer podium grouping than last year. If this race gets the recognition it deserves, I can really only see this getting closer in future years. 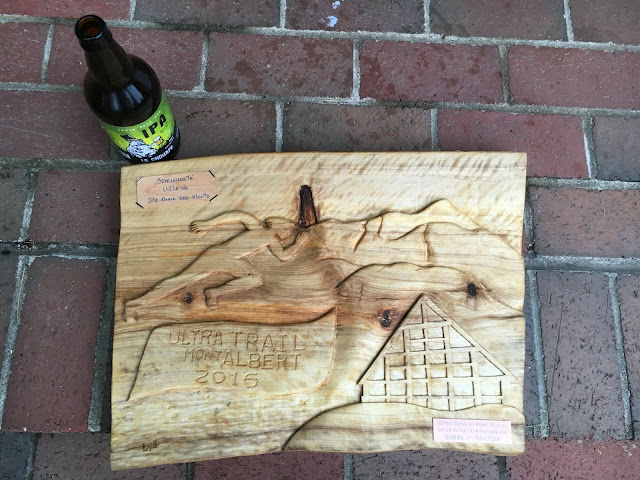 I have to say that I'm really happy with this race. The course fits an ideal that I've been looking for for a long time. The people are welcoming, the race is well organized, and the terrain fits well with my strengths. UTMA is a lot like what a race could be like in the White Mountain National Forest if we could have such nice things. I'm also satisfied with my performance, not so much because I won with a course record, but because I kept a good attitude throughout, had fun, and truly did my best. There's not much I would have done differently, and it's a reminder that I can sometimes still find the fulfillment I'm looking for in ultras. 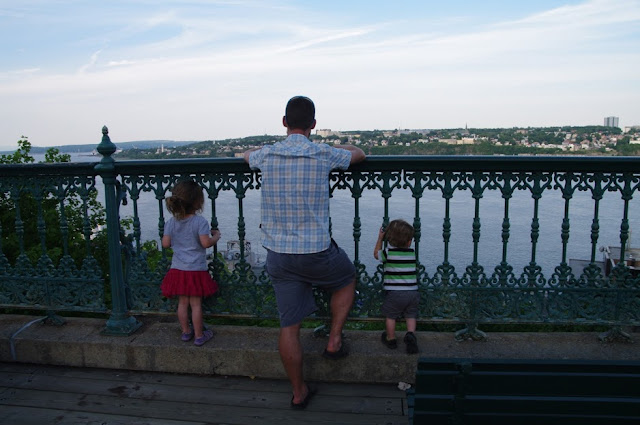 To cap things off, we stopped by Quebec City to relax and have ice cream on walls of the old colonial fortress. It was a really chill place to be, spending time as a family on a pleasant summer evening before the long ride home. 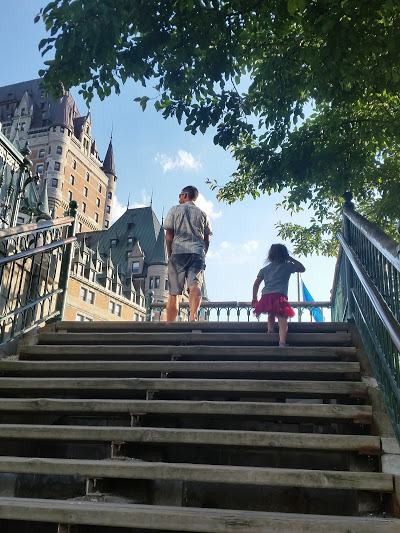 Oh, and they let me back across the border without too much trouble.
Posted by Adam Wilcox at 7:47 PM