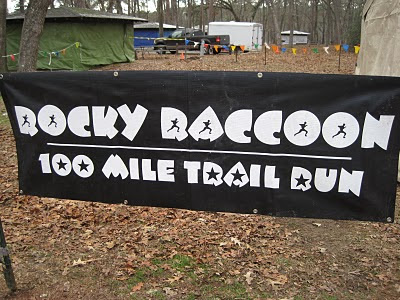 "How fast can I run a hundred miles under ideal conditions?"
That was the question I wanted to answer when I entered the 2011 Rocky Raccoon 100 Mile Endurance Run. Because no two courses are truly equal, hundred mile finishing times vary wildly from event to event. Normally, the more mountainous and scenic ultramarathons capture my imagination the most, but Rocky appealed to me on a different level. With 5 loops of 20 miles each on gentle, soft terrain, this race is billed as being "built for speed and comfort". The loop course would make it easy to run without a support crew, the location was accessible from a major airport, and I had never been to Texas. Combined, this all made this off season race perfect for a casual three day weekend trip; fly on Friday, race on Saturday, fly home on Sunday and stagger into work on Monday morning.
The race got even more interesting when I discovered that several heavy-hitters in the world of ultrarunning would be competing. Anton Krupicka, Scott Jurek, Karl Meltzer, Hal Koerner, and several others would all be attending; making for one of the more competitive 100s in the country this year. Being a loop course with many two-way sections, I'd get to share the course with many people I admire, as well a front row seat on the action at the front of the pack. 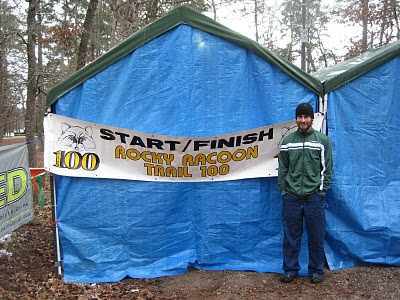 Joining me on this adventure were my friends Rob and Larisa, both running their first hundred miler. Our trip to Texas was a bit of a nail-biter, with a fluke ice storm disrupting air travel and causing major pile-ups on the highway outside Houston. Fortunately, luck was with us this weekend; all the major obstacles were cleared up just before our arrival and we made it on time. Others entrants were not so lucky and I heard of racers being stranded at airports across the country, ultimately missing out on the race. 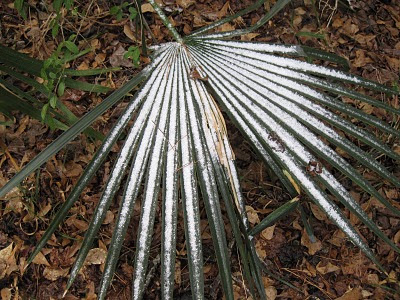 Once in Huntsville, we discovered that Sam Houston is big in the area, figuratively and literally, with an enourmous statue by the highway as well as his name on everything from parking garages to a nearby national forest. 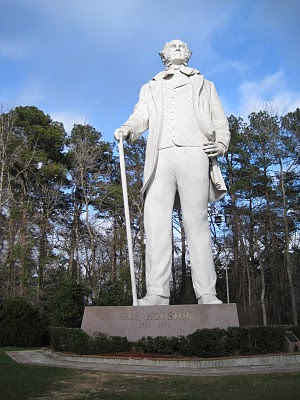 While 'gators may exist in the park, I didn't get to see any. I was also hoping to encounter an armadillo but I guess they all had better things to do this weekend, though did see one raccoon scurrying around. 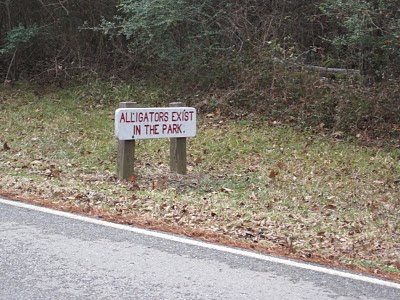 At the start we all shivered together in the pre-dawn darkness. Temperatures were in the mid 20s and a dusting of snow still coated the ground. This wasn't quite what I expected when planning a February run in Texas but my New Hampshire winter training had me well prepared for these conditions. As usual, my mileage numbers weren't quite what I would have liked, but on the bright side I was well rested and injury free.
At 6:00 AM we were off and running. Early on, I struggled with my pace; torn between blowing off some pent-up energy and holding back for later. In the end, I just did what I normally do and settled into whatever speed seemed comfortable, allowing people to pass me and trying to stay within myself.
The course did indeed turn out to be quite smooth and soft, with minimal elevation changes, but there were roots protruding from the trail just often enough that they could catch you off guard. I watched one girl do a full-on face plant within the first mile. Even with my technical trail running experience, I still managed to stub my toe painfully every few miles, though I never tripped. One other course challenge came from the many wooden bridges still covered in a thin layer packed snow. Though not treacherous, the slippery planks could easily send you sprawling if you weren't paying attention. 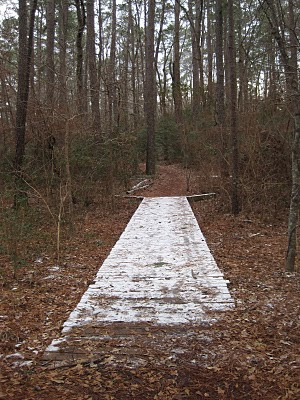 I was surprised to reach the Dam Road aid station at mile 6 in exactly one hour; ten minute miles seemed like a pretty fast pace to sustain. By now the sun was up and the temperature was beginning to rise, but I'd spent enough time in the cold to have ice form on my beard. Despite my best efforts to back off, I still hadn't slowed down by the time I reached mile 12 in 2 hours. The first loop went by in 3:12, for an average pace of 9:36 per mile, but I was feeling good and decided to just go with it. 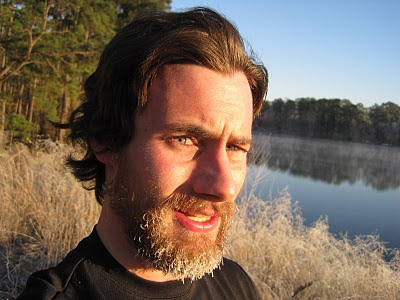 By the time I started the second loop, temperatures were creeping into the 40s and I decided to trade my long sleeves and tights for shorts and a singlet. I remember the first few miles of this loop being pure ecstasy; the sun was out, temperatures were comfortable, I felt very strong, and life was just generally good all around. I spent much of this loop running with a new friend, Brad, from Boston. An accomplished triathlete, this would be his first 100, and he was doing quite well. We traded stories, opinions on races and compared training notes. He did seem a bit surprised by my relatively low training mileage. Again, despite my best efforts, I was still moving very fast and finished this loop in 3:22. 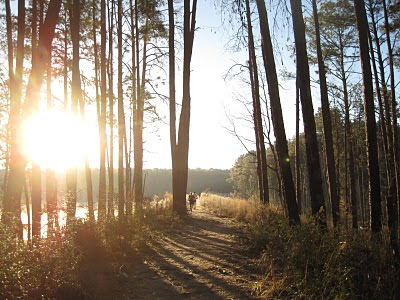 Loop three was not much slower at 3:34. Though I was steadily and intentionally shedding speed, I was still afraid that I was going too fast and setting myself up for a crash later. My goal at the outset was to finish in under 20 hours, something that proved to be a bit too ambitious at Vermont 100 and left me with a stinging DNF from the summer. While confident that I could keep up this pace, I was also acutely aware that I'd had a similar feeling for the first 80 miles of Vermont. Was I fit and mentally tough enough to go even faster? Should I be conservative and ensure a 20 hour finish here, or continue on the same path and try to get an even faster time? In the end, I decided to say the course and keep running hard as long as I could. 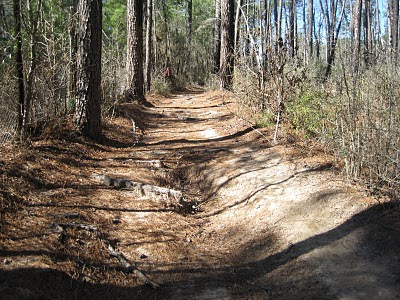 Near the end of my third lap I was passed by Ian Sharmin, who went on to win the race and destroy the course record in a time of 12:45. This works out to an average pace of 7:38 per mile. That's my normal pace for a 5 mile lunch break run. Incredible. Not knowing who he was, I was left wondering who the hell just passed me going so damn fast. 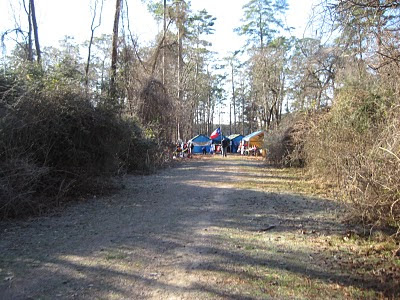 Loop 4 was the hardest for me mentally. With 40 miles to go, my quads were already feeling beat up and my hip flexors were sore. I still wanted to run as much as possible, but with so few hills to provide natural walking breaks, it wasn't as easy to rotate between different muscle groups as on a hillier course. Heading out on this loop, I saw Scott Jurek in street clothes at the first aid station. Apparently he'd had some problems and was forced to drop from the race. I got a nice boost of enthusiasm when he offered me some words of encouragement as I passed by. It was on the Dam Road Loop where I was lapped by Anton Krupicka, followed closely by Hal Koerner. Both of these elites looked like they weren't under any stress at all and quickly disappeared ahead of me. With 8 miles left in the loop it grew dark enough that I needed my headlamp again and the temperatures began to drop. I came in to the start/finish area for the second to last time with 3:57 for the loop. 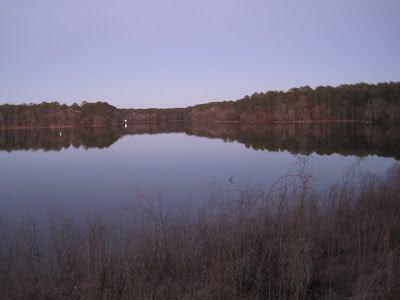 As I headed out for the last time, Rob and Larisa came in from their third loop. I was happy for them as they were both looking strong and I knew they would finish well. Departing this time I was glad to be back in long sleeves, a hat, and gloves as the night time temperatures dropped back into the low thirties and I tend to get more vulnerable to the cold when I've been out for so long. I was also enjoying the success of my revised nutrition plan. For a few years I've been struggling with blood sugar crashes in ultras. This time around, I was consuming as many easily processable calories as my stomach could handle, over 250 per hour. As a rule, I was going through 6 GUs, 1 pack of GU Chomps, and one bottle of Clip 2 per lap in addition to soup and pizza I got from the aid stations occasionally. While there were times that I thought my stomach might rebel, I think this level of intake is what I need to keep from bonking. My energy levels remained high throughout the race and I was limited more by muscle fatigue and soreness than by feelings of exhaustion.
Joining me for much of the last lap was a friend I knew from an online forum, Devin from Houston. We'd been posting to the same message board for a couple years, and it was nice to finally meet and spend some time with him in person. He was running his fourth lap while I was on my fifth and our pace matched up pretty well until I had to leave him behind while he took care of some things at an aid station.
Soon enough I had only a few miles left to go and didn't have to worry about conserving energy any more. I ran as much as I could and, despite the fact that I'd covered these trails sections four times already, I was feeling so good that I was sorry to be leaving them so soon. This entire race was fun and I didn't want it to be over. Rounding the corner for the finish, I did my best sprint down the homestretch to cross the line in 18:26 for 17th place overall. And that answers the question I asked of myself, "how fast can I run a hundred miles under ideal conditions" - just under eighteen and half hours. As always, there's room for improvement, but I'm content with that for now. 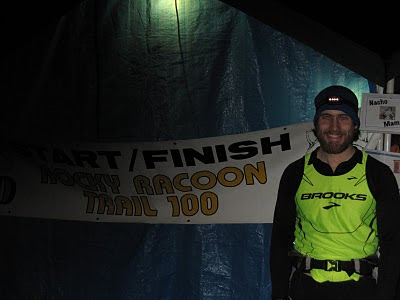 One of the cooler buckles out there. 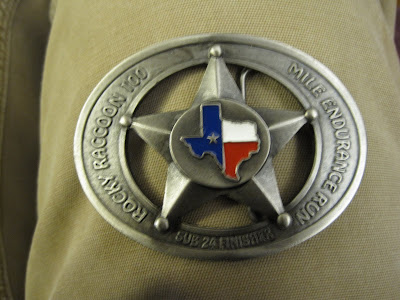 Overall, I'm quite pleased with how well things went. I set a new 100 mile personal record by over five hours and placed in the top 20, despite having a very strong field to compete with. After a few hours of napping, I got back up in time to see Rob and Larisa finish just after dawn. The trip was a success for us all and I know we're already planning our next 100 mile adventures. While laying on the ground at the finish in my sleeping bag, I found out that my name was on the list of lottery winners to run this year's Wasatch Front 100 in Utah. With Massanutten coming up in May and Wasatch in September, I've got big things to prepare for and that's just the way I like it. 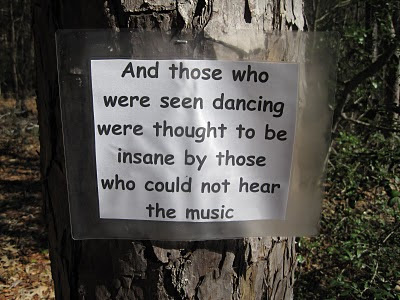