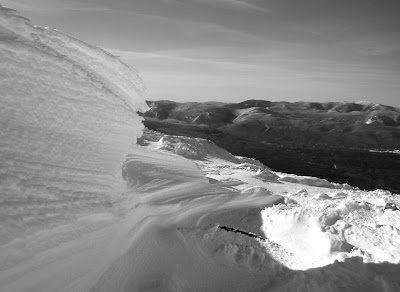 For quite some time the Presidential Traverse has occupied a special place in my mind. Looming large from the first time I heard about it, the traverse has been the scene of several pivotal moments in the course of my life - not the least of which being my first daylight meeting of my future wife on Mount Adams in 2005. As with many other achievements, completing such a long route once seemed like a reach goal. It was the reason I first started running on a regular basis.

While I still kick around the Whites quite a bit, one stone that had been left unturned for me was traveling the ridge in winter. For a while I bought into the traditionalist school of thought that multiple days would be required and that the going would be slow and heavily laden. Like so much other dogma, I've discarded this notion. Under the right circumstances of weather, experience, and fitness, a single day winter traverse is quite doable at an acceptable risk level. When I briefly mentioned to someone that I'd left out a few items to lighten my pack, I was met with predictable disapproval. I've been thinking about the risks I take for some time and I'd like to lay out my thoughts on them in more detail in a future post.

Anyway... On the second to last day of 2010 I found myself departing Appalachia on the Valley Way trail at six in the morning. It was still quite dark as we worked our way steadily upwards under a clear sky. The headlamp behind me was held up by my vastly more talented friend, Farmer. Though our goal was a traverse all the way to Mount Jackson, this was only a part of a much more ambitious multi-day adventure for him.

Our pace was brisk and we reached Madison Hut more quickly than I ever have before, though too late to catch the sunrise. Conditions were relatively warm, the skies were very clear, and the wind quite light. With Farmer a bit ahead of me, I dropped my pack at the hut and hurried to catch up. A 20 mile per hour breeze kept things fresh on Madison's summit; these would the highest winds we'd feel all day.

Washington and Adams from Mount Madison: 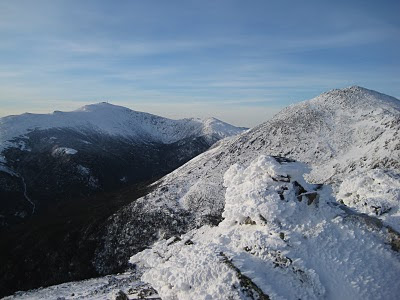 The normally rough and rocky slopes were filled in with firm snow and our return trip to the hut went much more smoothly than it does in summer. Earlier that week, winds in excess of 140 miles per hour had stripped nearly all the loose snow from the alpine zone and sent it into the collecting valleys below. What remained in most places was a firm styrofoam-like surface that made for very favorable travel conditions. However, in lee areas where the topography was sheltered from the prevailing northwest winds, we had to contend with deep and unconsolidated drifts. This slowed our progress to Mount Adams but was overcome soon enough.

Just below Adams' summit, we switched our snowshoes out for Kahtoola Microspikes. These minimalist traction devices worked quite well, being lighter and much less cumbersome than crampons. 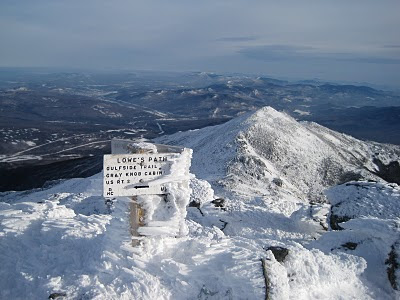 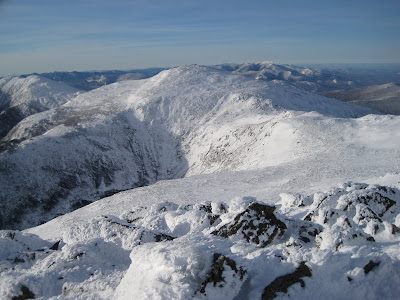 Farmer heading for sunlight on the slopes of Jefferson: 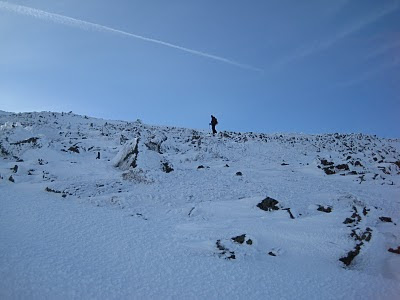 Approaching Mount Jefferson, we opted to contour around to shallower slopes on the northwest side rather than contend with the steeper pitches that the trail follows. Normally we'd stay on the trail above treeline, but with snow covering everything we were free to take whatever route we thought best. The summit came and went rather quickly and Farmer was able to pull away and put some distance on me on Monticello Lawn. Due to a combination of different fitness levels and an oncoming cold, I spent the rest of the day lallygagging behind.

Looking back toward Jefferson from the slopes of Mount Clay: 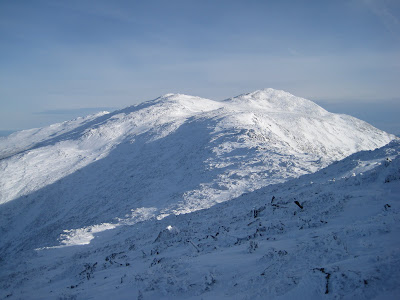 I worked my way alone up Mount Washington for my first time on the actual summit in about a year. Though I spend a lot of time within a mile of the top, I've developed a preference for avoiding the circus. Today, there were only a few people to be seen but I still didn't stay long. With ideal weather holding I worked my way in a semi-direct line down to Lakes of the Clouds Hut. There were a few steep, hard snow slopes to cross that were mildly sketchy in the Microspikes, but good French technique foot placements got me safely by without any drama.

Mountains into the distance: 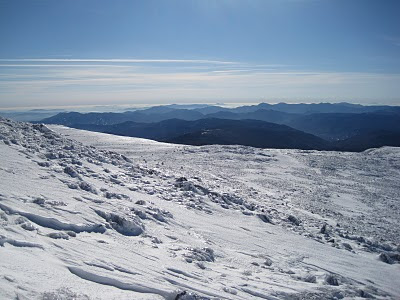 The Southern Presidentials. The remainder of our route follows the crest of the ridge over Mounts Monroe, Eisenhower, and Pierce. Lakes of the Clouds Hut is visible right of center. Seeing as Farmer was a bit pressed for time, the conditions were excellent and the hardest part of the Traverse was behind us, I had no problem with him jetting on ahead at his own pace. This left me free to move at my own speed and was probably better for both of us.

Looking back to Washington from Mount Pierce. 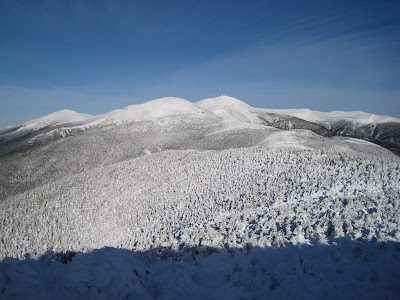 Upon reaching Mount Pierce, I decided that I'd had enough for the day so, while Farmer went on to bag Mount Jackson, I took the easy way down on the Crawford Path. Reaching Route 302 at 2:52 PM gave me an elapsed time of 8:52, my fastest Presisdential Traverse yet. I still have yet to really run a strong summer Traverse and I'm very much looking forward to that this coming year.
Posted by Adam Wilcox at 7:54 AM