"THIS IS NOT LIKE ANY OTHER ULTRA YOU’VE RUN BEFORE!"

So proclaims the Manitou's Revenge web page. They put it in capital letters so's you won't miss it, even if you're only semi-literate like I am. Hyperbole is a bit of a cliche in ultrarunning but, that being said, I'm going to put my next statement in it's own paragraph just so you don't miss it:

I'm a believer in frame of reference. I once caught some flack for calling a Massachusetts 50k "flat and fast" and I suppose if your only experience was on roads then you might have felt sandbagged too. My benchmark has always been the White Mountains and few courses I've run have been able to match them for technical trail running and long steep climbs. I'll admit the possibility of some personal bias there, but I've always wanted to have a competitive race in my own personal brier-patch. Alas, the Man puts up red tape and we can't have such nice things... until Manitou's Revenge came along.

The Manitou's Revenge course is remarkably similar to the Hut Traverse in the Whites. It's a little over 50 miles long, has a solid 14000' feet of climbing, and features gnarly, rocky terrain over the Escarpment Trail and the Devil's Path in the Catskills of New York. Because it's on state, rather than federal land, the race director and his crew were able to work out a deal where the race would be permitted to take place. I think this makes a good example of what such an event can be. We as runners got to participate in a unique and challenging event with minimal impact on the natural resources and other users of the area. 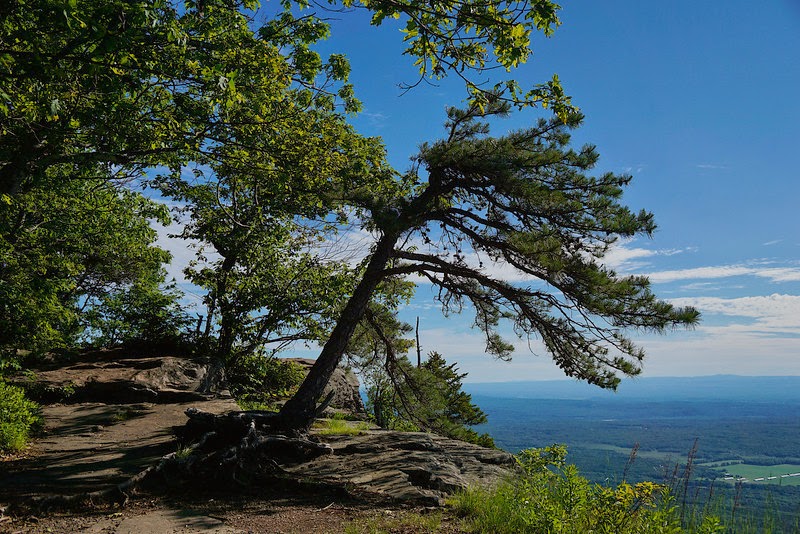 To top things off, not only was the course what I've been looking for, but so was the competition. Denis Mikhaylov was returning after his win last year. Brian Ruseiki, one of the best ultrarunners in the northeast, would be starting as well. Additionally, the last four FKT holders for the Pemi Loop would be there; Ben Nephew, Jan Wellford, Ryan Welts, and myself. Credentials go deeper than that all around, but I'd like to think that any one of us six could have taken the win. Personally, I felt rather outgunned but held out hope that the difficult course would play to my strengths and my hundred miler experience would let me be a contender in the later sections of the race. 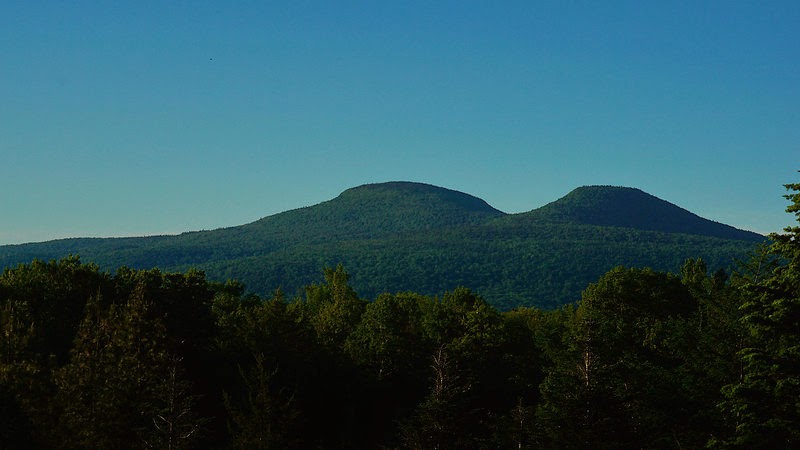 We started at a reasonable pace and it didn't take long for a lead pack of about eight guys to form, most of whom I expected with a couple unfamiliar faces. No sign of Denis, though. I was excited to finally check out the Escarpment Trail and it didn't disappoint. The running was technical and stimulating but nothing too crazy and we were periodically rewarded with views of the Hudson River Valley from clifftop overlooks. Denis had made it to the start late and must have been pushing pretty hard to catch us. He came barreling through kamikaze-style like he was running a 5k, made a few sketchy passes off-trail in the bushes, and was soon out of sight. Ben and Brian made a move to pick up the pace and I and a few others took the chance to follow.

2014 Manitou's Revenge, leaders on the Escarpment Trail, mile 17 from MountainPeakFitness.com on Vimeo.

I lost contact with the lead group shortly after we passed through North Lake Campground at mile 17 and was surprised to pass an ailing Denis so soon on the long descent into Palenville where I joined up with Jan Wellford. It was nice to spend a few minutes with him in person after a couple years of sporadic email contact, though the conversation ended when Jan pulled away from me on the climb up Kaaterskill High Peak like I was standing still. At that point, around halfway through the race, I figured the finishing order was all but settled, with Brian and Ben being long gone. Picking my way along the muddy and rooty trail I was happy to have Ryan catch me and we ran together into Platte's Clove at 31.5 miles. 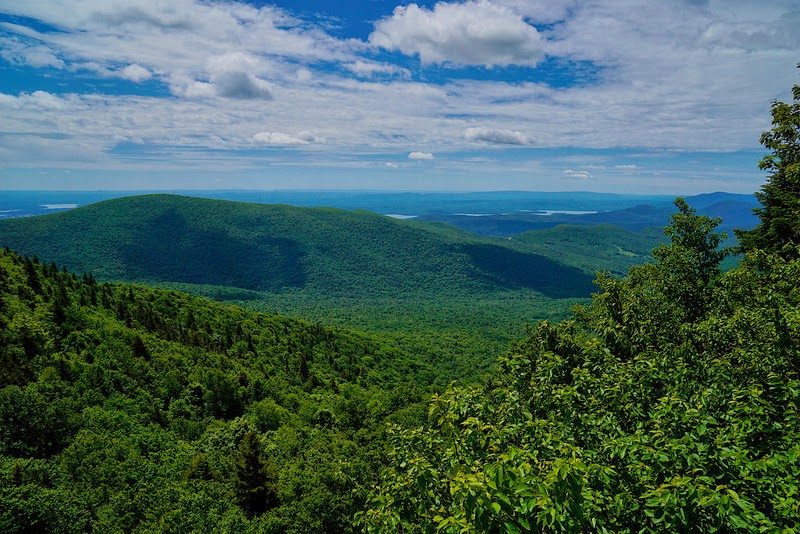 Up next was the infamous Devils Path. There were root ladders and numerous thirty foot ledges to scramble up and down, along with boulder fields to hop across. The rocks here are different than the Whites; much flatter with a smooth texture and they all move and shift underfoot. Ryan and I started catching glimpses of someone running up ahead of us through the trees and I thought it must be Jan. Imagine my surprise to discover a seventy year old man from New Jersey absolutely hauling ass down some difficult technical sections. Ryan and I professed our admiration for his strength and skill when we finally did feel ready to pass. I want to be like him when I grow up.

By the time we'd reached Mink Hollow at 38.5 Ryan had pulled away from me and I came into the aid station less than thirty minutes behind the leaders. This was something of a low spot as I was struggling with my usual mid-day bonk and my ankle that's been problematic this year was acting up. It wasn't painful but after eight hours of uneven footing the joint stiffened up and I had a limited range of motion. Strange how my ankle could be perfectly fine over seven hours on the Pemi-Loop but after hour eight it becomes a problem. I'll admit to feeling a little discouraged but it turns out I was not nearly so far behind as I thought at the time. 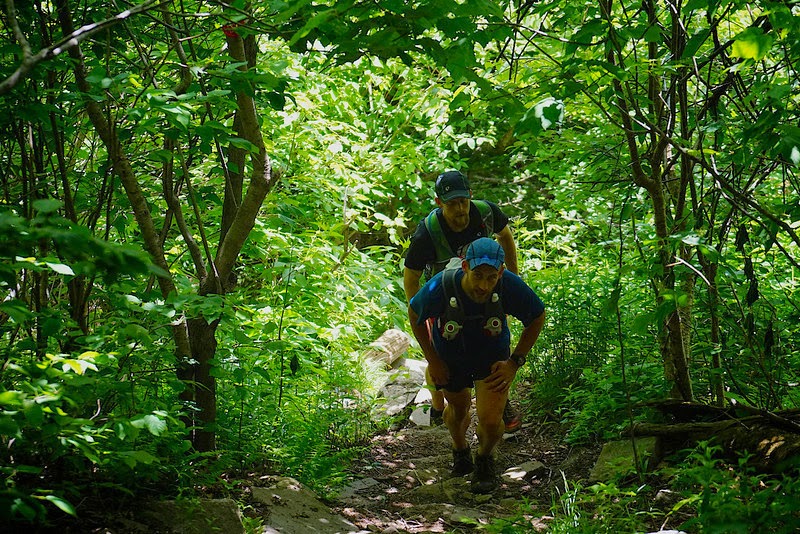 Despite slowing down, I was hoping to maintain my position in fifth but was caught by by Carlo from Italy just after Silver Hollow (mile 44). We were finally off the Devil's Path but my condition seemed to keep me at the same slow pace. Carlo tried to get me to stay with him, and I did for a while, but when we hit the Warner Creek crossing I stopped to cool off a little and he kept going. After that it was a long lonely walk up the final climb to the fire tower on Mount Tremper. Just before the top I heard some commotion off to the side in the woods and caught a glimpse a of a black bear crashing through the brush. I haven't seen a bear in the woods in a long time.

The last major aid station made a good excuse to sit down and indulge in a couple handfuls of Skittles, something I don't normally eat. Chatting with the volunteers, I was surprised to learn that Jan had come through in first place with over a fifteen minute lead. It sounds like he ran a smart race all day, hanging back early on and making his move in the later stages to earn the win in 10:50:34. I jogged slowly down the final descent into Phoenicia on an old jeep road to cross the finish in 12:28:15 for sixth place. 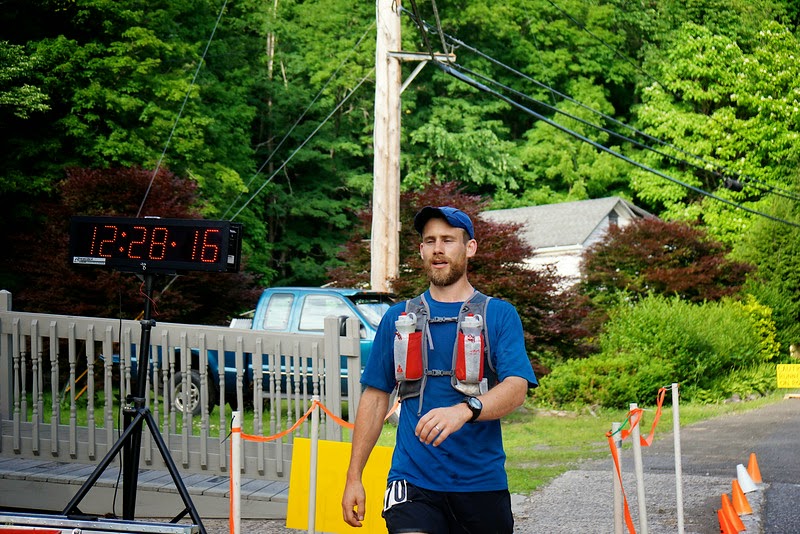 Manitou's Revenge as an event turned out to be everything I'd hoped it would be. It's the exact kind of course I've been wanting for a long time and I think it has a bright future. Superlatives are overused in ultrarunning, but I'm going to go ahead and call this the hardest race course of it's length that I'm familiar with.  It easily outdoes the Pittsfield Peaks 50 in Vermont, which has similar elevation gain but easier footing. Wapack 50 in New Hampshire would be next in line but it doesn't have the same kind of gain and the difficulty is not nearly as sustained. As for comparing Manitou's to the Hut Traverse, I think the Hut Traverse has the edge with its greater gain, bigger climbs, and footing that cuts you even fewer breaks. And then there's the elephant in the room, the race I've been invited several times to compare Manitou's to; Hardrock. All things considered, I'm going to call it about even with what a Hardrock 50 would be like. Sure, it's a crude comparison as the character of the landscape is totally different but based on finishing times I'm going to say they're in the same ballpark. 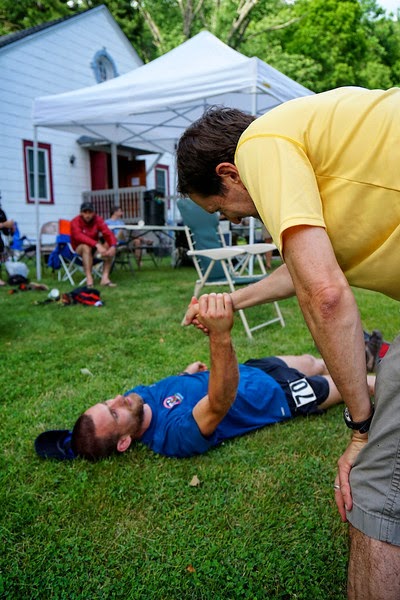 As for my own performance, I'm left a little disappointed. There wasn't much I could have done about the ankle issue, but fueling and pacing remains a persistent problem for me. I've been taking in 200-plus calories per hour in gel and I still run out of gas in most races. My muscles seem to be up to the challenge, I had no soreness in the following days, but I just couldn't seem to get them the energy they need. This weakness is probably the greatest barrier to improving my performance and I'll likely be looking into improving my fat metabolism rather than relying so much on carbohydrates, to gain an edge.

I want to express my huge thanks to my wife and daughter who crewed me, the race volunteers, and especially to Charlie Gadol who saw this race through. Charlie, if you ever do go through with that 100 mile version you mentioned, I'll be the first in line to sign up.

All photos courtesy of Joe Azze at Mountain Peak Fitness.
Posted by Adam Wilcox at 8:24 AM